Still Not Feeling It...Are You?

I am having such a hard time feeling the Christmas spirit this season! I got that new tree and still have no desire to put it up. I have no desire to pull all the stuff in from the garage and decorate the house. I have no desire to put the lights up on the house. None. It is completely sad and depressing. As I drive around, it is sad to see so few houses with lights on them. I keep praying that Heavenly Father will help me get out of this funk. It is the 7th of December and I have never been this late in putting up a tree. Argh!

On the other hand, today in Sacrament meeting, we sang our first Christmas hymn. At first, the organist started making all kinds of mistakes while playing the introduction, which was very unlike him. He seems to be quite the organist. I was surprised at the errors and wondered what was up. Sometimes he plays kind of fast, so maybe that was it. As he finished the intro, we all prepared to take our first breath and to sing Angels We Have Heard on High. All of a sudden, he started playing the hymn and the music completely changed. It was as if bells were playing! It was the coolest thing! He had turned on the bells on the organ and they were playing while he played the song. The congregation all kind of sat up a little taller as they sang and it felt like people got a little more "spring" in their voice. That is one thing I am loving about this new ward - people actually sing! I looked around and you could see that people were enjoying it. Now, THAT helped a little with the funk I'm in.

I am just going to have to force myself to "Christmas-Up" and get out of this funk. I'm still looking for that special Christmas Eve story to share....

After church, we came home and chowed down some leftover tacos. C took a snooze on the sofa and dad worked on some bead gifts for Auntie and Lisa. Then, we went to tithing settlement and then headed to Auntie's for dinner. She made a yummy roast beef dinner and afterward, we all played Mexican Train - a dominoes game. 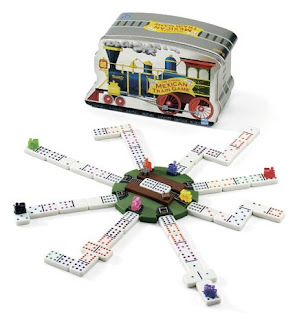 It was a lot of fun and we made it all the way down from the double 12s to the double blanks. I was such a bad winner...everyone else was up in the 3 and 4 hundreds. I ended at 167. I gloat and I have got to stop! It was a really fun evening though and I hope we can do it again soon!

If you would like, I can come over and help you get your tree up! I wasn't feeling the Christmas spirit at first this year either since things are so tight but Ehren got everything out and told me to find my Spirit and well, I think I have. So if you need help just let me know!!! Glad the Make a Wish party went well, it looked fantastic and like all the kids had a great time! Mexican Train is so much fun! You didn't hear this from me but I am a bad winner too when it comes to this game, it is the only game I have ever been able to beat Ehren at, so I rub it in really good, shame on me, lol. Hope your having a great week! Miss ya girl, I have your TY card waiting for me to bring it by.

I didn't realize you were in a new ward. How did that come about?