Phoenix Suns vs. Atlanta Something or Other

I am so lame....I don't even know the name of the opposing team other than Atlanta something or other!!! I could look it up, but what's the point now?

We had tickets for the Phoenix Suns vs. Atlanta basketball game tonight at US Airways. It had been a while since C and I had gone to a Suns game because the last time we went we were so uncomfortable in the seats. The seats were located in the 4th row from the very top and the view was limited by some plexi-glass at the bottom of a stairway, which, consequently was horrible as well because everytime someone needed to go up the stairs, they were in our way. So, after that game, C and I said the traditional, "Well, I guess we can cross that off our list."

This year, our company was finally able to upgrade our seats (for a very hefty price) to move us into the lower bowl. So, C and I decided to take advantage of my good fortune of being in charge of divying out the tickets among our Sr. Staff and we went to the game. Parking was great - quick and easy to get into the arena. Seats were semi-close to the food and they were actually 2 rows below the suite level. Although they were in the corner, essentially, the view was alright and we were able to see quite a good view of the game. HOWEVER, they were just as small as those up in the nosebleed section. Seriously, you guys who build arenas...have you NOT noticed that people are getting bigger? Are you the same people that build airplane seats? Really...please...our butts were squeezed so tight into those seats that if I had laughed I would have popped out an orange julius! 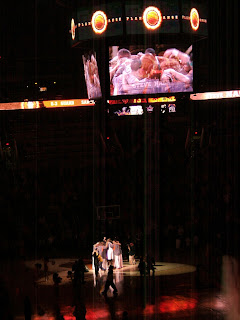 The game was great right from the start, although because I was trying to get my old portable camera to work right, I missed the tipoff and consequently could not figure out why everyone was booing! The first shot of the game was by Steve Nash and it was a 3-pointer. Yahoo! We were off to a roll. Suddenly, it was basket after basket after basket - all Suns. There was one point that we were up by like 24 points. Suddenly, something happened and Atlanta came back within 4 by the half. Now, I must say...when D'Antoni (the old coach) traded a bunch of players just to get Shaquille O'Neal, I thought he was pretty lame. However, after a season of playing with the Suns, he finally has found a groove and is doing much better. I must also say...he is HUGE. Now, Steve Nash is a good sized guy, but put him next to Shaq and seriously, he's like Pee Wee Herman next to Goliath.

C and I just were struggling to enjoy the game. So much, in fact, that C was texting his friend from work! (Although, this pic was taken before the game actually started.) 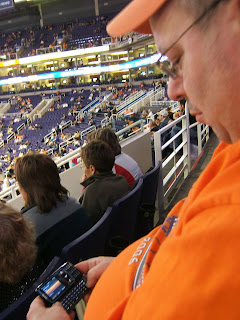 Part of it was the seats, part of it was the game. It just wasn't "exciting." Plus, we were still hungry (the expensive arena food just didn't fill us up or hit the spot). So, we decided to head out. All the way home, we tried to decide on a place to get something to eat. I finally gave into Dillon's. I'd been resistant to going there since our last fiasco at the one in Geezerville (oops, I mean Sun City Grand). But, it was 10 to 9 and all those old Sun Citians were already asleep by now. So, we walked in and were one of 3 couples left in the joint. We got our food and...well, let's just say we've definitely crossed that one off our list now too. Sad...that was where we went on our first date. (Yeah, yucky picture of me and you can't really see my new blonde-ish hair. Man, look at how fat my upper arms are! Ewwww....) So, we headed home and off to bed. 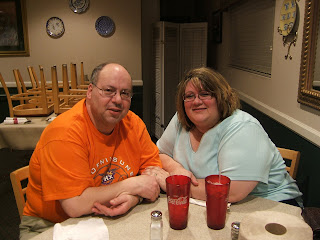 My depression yesterday was REALLY bad. I kept my office door closed almost all day so I could just be alone and try not to let others know what I was going through. I wish I could get out of this funk. It is really bad this time. Today was not so bad though, so that is good. Maybe my prayers to Heavenly Father helped. Could be that the conversation/discussion that C and I had in bed last night helped a little bit too. Anyhow, I was still down today - so much still that I told my boss that I just needed to take tomorrow off. C has tomorrow off and so I think we will just spend the day together and see if I can cheer up....we'll see how it goes...