Today was a beautiful day - literally. The sky was so clear and blue. I don't recall seeing one cloud in the sky the entire day! It was cold and crisp and the wind was blowing just enough to make one shiver. But it was truly beautiful!

We stayed with Kev and Jodi and Ari overnight. Kev made a scrumptious breakfast casserole and we munched on that until it was time to head to the stake center for Dylan's baptism. We got there and Dylan and Kurt were already to go - all dressed in white. Unfortunately, we got there late enough though that I wasn't able to get a picture of them beforehand. I hope someone did - Ang?

Seeing this cute little 8 year old boy, so full of life and excitement, take this important step in his life made me think back to a question my boss had asked about a week or two ago when we were talking about why we were going to Utah. I had told him my nephew was getting baptized and he asked how old he was. I told him that Dylan was eight and that most children in our church are baptized when they turn eight and that we feel a child of that age has reached the age of accountability and can understand the difference between right and wrong in the choices they make. He then asked if we thought that eight was old enough for a child to truly know Christ as their Savior and understand what that means. I told him yes, but have since started to question my answer. These conversations with my boss often make me think more about my testimony and knowledge of our church's teachings. But, as I've thought more and more about this answer, I've come to realize that I was right in what I said. See, his beliefs are that baptism is only an acknowledgment that Jesus Christ is one's Savior. I know that's part of it, but it's also the commitment one makes - whether 8 or 18 or 48 or 80 - to follow God's plan so we can return to Him someday - and, it's the washing away of one's sins. I personally feel that 'most' children in our church do know our Savior by the time they are eight and have a testimony of him - probably not the same as an adult does but still in one way or another. Their sweet testimonies are developed as they progress toward that age and if properly instructed in church and at home, they draw near to Him even at such a young age. Now, the whole discussion on understanding accountability and what that means in relation to baptism, etc....well, nowadays, I'm not too sure if the kids truly do understand that, but again, if properly instructed, maybe they do. Either way, watching Dylan today you could tell that he understood what he was doing and what it meant.

Anyhow, the baptism was lovely and once it was over, we headed back to change our clothes so we could go to their ward building for a party (our family is so big now that we often have to hold parties at the church!). 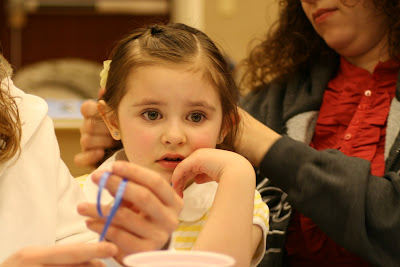 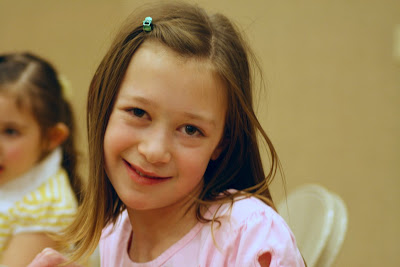 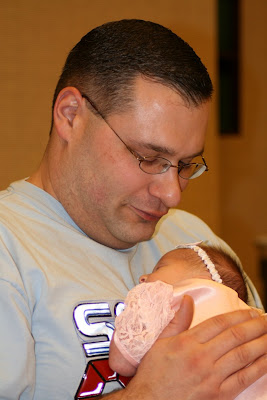 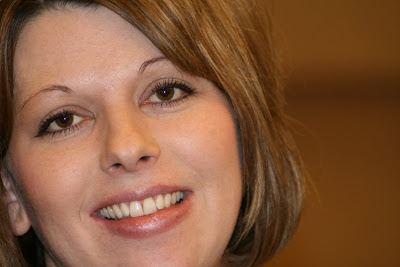 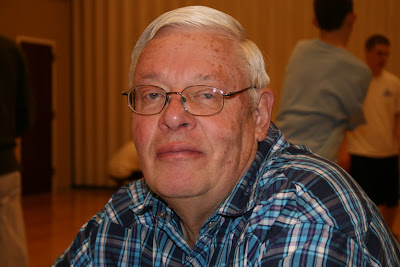 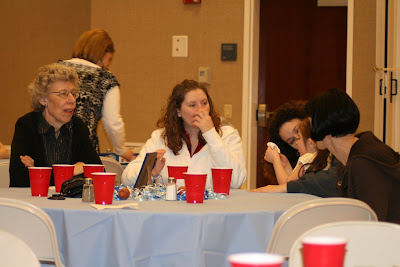 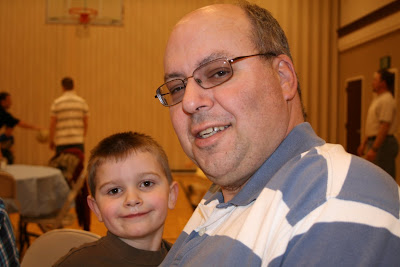 Dylan had expressed that he wanted everyone to bring a change of clothes so they could play basketball at the party. So, that's what we did! I didn't actually play, but a lot of people did and that's what mattered. Dylan was so darling out there and he's a good shot. 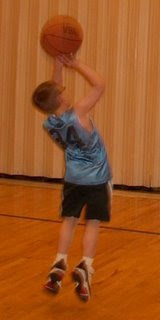 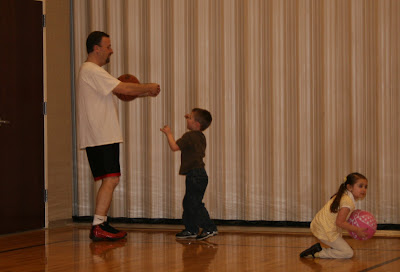 He got quite a few presents and everyone sat and watched him open them. He was so excited while he was talking that his hands were going a mile a minute! 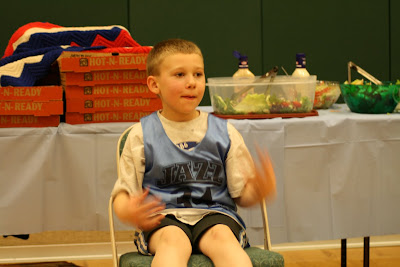 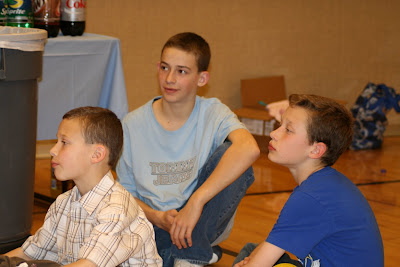 Karl, our cousin with Down Syndrome also played and boy, is he good! He showed all of us his muscles and made sure to tell us all that he was going to a dance that night! 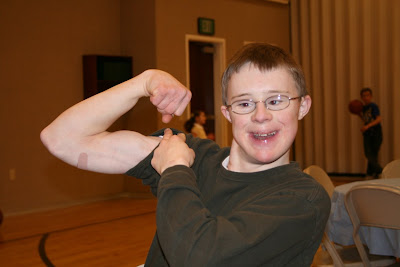 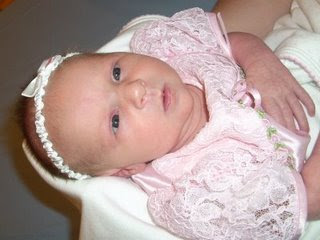 Once everyone was ready to go, my sisters and I jumped into my truck and off we went to Macey's. As part of our trip up to Utah, we were picking up the food storage items that Dad had been picking up for us periodically throughout the last year (since they don't have good case lot sales here in Arizona). As well, it just so happened that Macey's (where I worked when I was going to BYU) was having a huge food storage caselot sale while we were there. I'd checked out the ad a number of times and had a list of everything I wanted to get. We came with a partially loaded truckbed which we'd been able to unload when we got rid of the horse, but now we were going to go home with a loaded bed! Jen and Jules sat together in the passenger seat in the front and I drove. The back seat was filled to the brim with stuff - mainly the food storage that we had canned the day before, plus our egg noodles and such so it was pretty much a necessity for them to share the seat! We arrived at Macey's and I about went into overload! The store rocked! They had a huge food storage section that was so fantastic it's hard to describe, as well as a little #10 can section off to the front of the store. I wish I would have taken a picture of it!

We each grabbed a shopping cart and pretty quickly we determined that a cart was not big enough for everything I planned to buy, so Jen fetched a flatbed cart. We reloaded and continued up and down the aisles. It was a blast! I got a ton of stuff. See the list I've been compiling on the sidebar of this blog. I got sugar, flour, lots of canned goods, lots of pasta, and lots of stuff in #10 cans we can't get in AZ unless ordering from Utah and paying tons of freight on it. When all was said and done, I left there about $350 lighter (plus about $50 for Auntie Sigie's stuff and the $100 worth of stuff Jen picked up for me a few days ago) and as Jen put it on her blog, "the Maceys manager made sure to thank us for our business." :)

I had so much fun with my sisters. I wish Jodi and Angie would have been there with us too. I love all four of my sisters. It doesn't matter if they are by blood or by marriage - I love them all. I don't know why I didn't ask Jod or Ang to come - I know I figured Ang would want to be with Dylan and the day had probably already taken a lot out of her, but why I didn't ask Jodi to come, I don't know. I hope I didn't hurt her feelings, now that I realize this!

We dropped Jen off at her in-laws house because their entire family was going to the Draper temple open house that night. Then, Julie and I headed for Kev's house. We unloaded ALL of the food storage into his garage so it wouldn't be completely outside in the elements or able to get stolen. Then, we all hung out for a while. The rest of us, except Jen and Shane and Kurt and Ang were going to go to Rodizio Grille for dinner to kind of celebrate Kev and Jodi's birthdays which were coming up. C and I had never been there. It's a Brazillian steakhouse and it was FREAKIN' PHENOMENAL! So fun! The meat servers were great! The food excellent! I've heard there is a place in Provo that is similar called Tucano's but we chose to go to Rodizio since it was closer. Maybe the next time we're in Utah, we'll try Tucano's. Anyhow, everyone loved the grilled pineapple (except me - I don't care for warm fruit) and the meat was scrumptious. I wish my point and shoot camera would have been working better so I could have gotten more pictures, but it just wouldn't work so these are all I have. Better than nothing, I suppose! 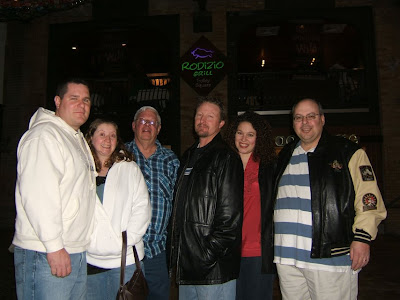 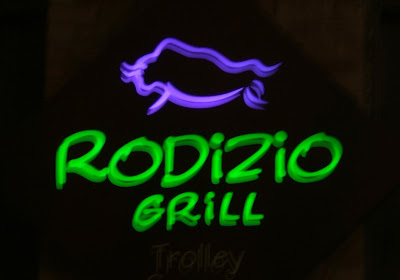 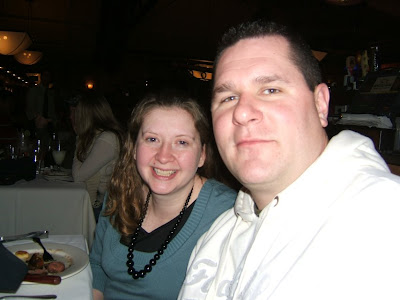 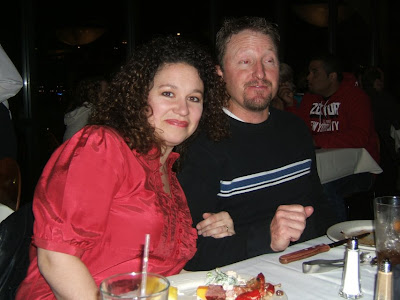 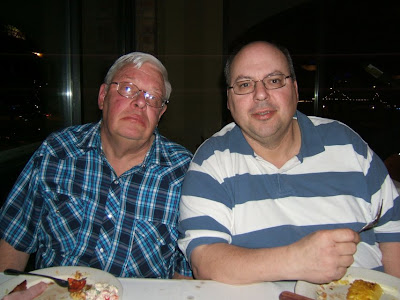 What a fabulous day! I got to see my nephew be baptized into our Lord's kingdom, I got to be with family, I got to follow our prophet's counsel and add to our food storage, and I got to eat a fabulous meal with most of my family. What a wonderful day. Mom would have enjoyed every minute of it. Man, I miss her.....

I was so glad that you included me in the Macey's shopping adventure. I had so much fun being with both my sisters.
Rodizzio Grill was a blast and it was the first time I really got to spend more than a few minutes with Clint. I will never go back to Rodizzio without thinking of sharing or should I say taking over his key lime pie!!! I wish you both could come more often.