"Can" You Say Food Storage?

After having to use my cell phone for an alarm clock because the old fashioned alarm clock in the room didn't work, we finally got up in the morning around 6:30ish. I tried to bathe as best as I could in our tiny little tub and we headed down for breakfast.

The dude cooking the breakfast kept making this weird moaning sound. It was like, "mmmmm, mmmmm, mmmmm." Huh? C and I just stared at each other and felt like we were in the twilight zone, wondering how long it would be before he killed us and buried us in the backyard.

We ordered scrambled eggs and sausage for breakfast. Well, the eggs were definitely scrambled - scrambled into tiny little pieces that were so little that you could barely pick them up with a fork and so dry that I just wanted to pour some water on them to try to rehydrate them. Oh well.

We ran back upstairs to re-pack and then checked out. C wouldn't let me tell them what I really thought of the place when they asked how we liked it....he knew I wouldn't have been very kind, I guess.

As we got into the truck, both of us farted. Oh my, one very small whiff of that and we both about passed out! It must have been that great breakfast!

We left Kanab around 8:45. We recently purchased a GPS system and it was fantastic. We plugged in Jennifer's address and it told us precisely when we should arrive.

As we headed north, we began to notice that the roads had patches of snow on them. This was only about 20 miles north of Kanab. Either it had snowed during the night or the wind had blown some residual snow across the road during the night. Either way, we had to be a little more careful driving. The pictures of the snow off the roads was beautiful. The sky was absolutely gorgeous blue and the sun was shining so brightly. It was stinkin' cold outside though! I kept taking pictures of the temperature as it continued to drop. 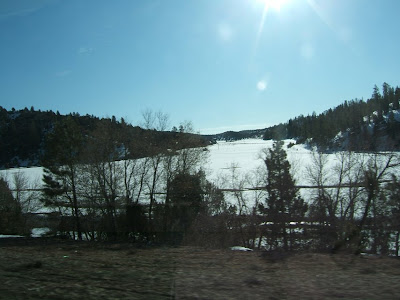 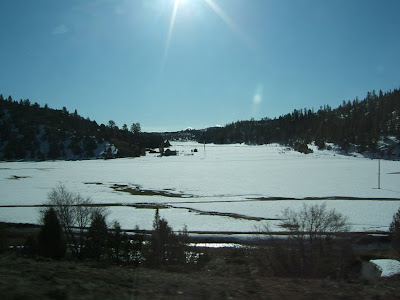 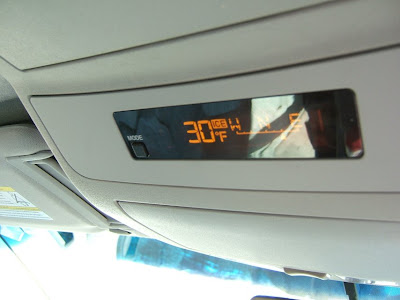 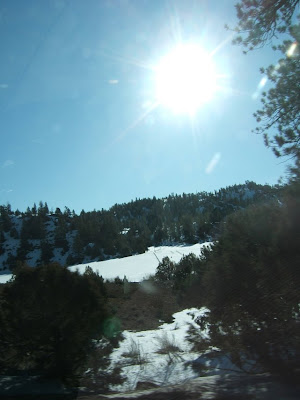 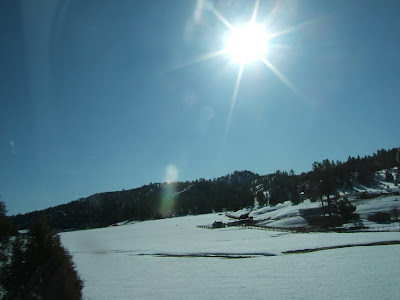 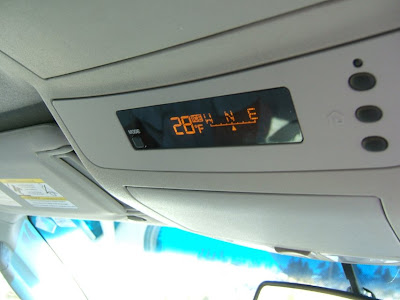 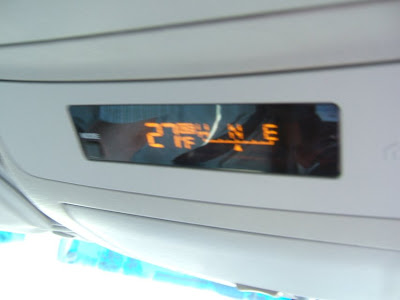 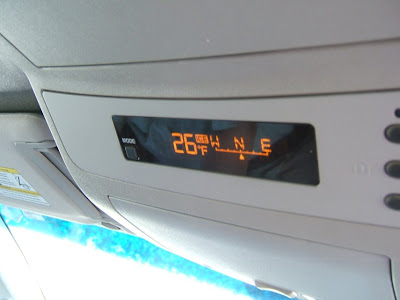 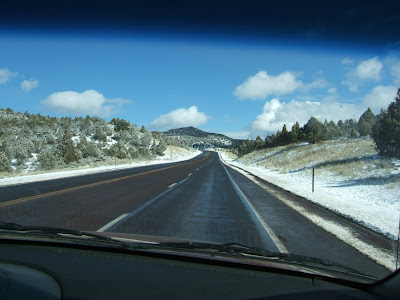 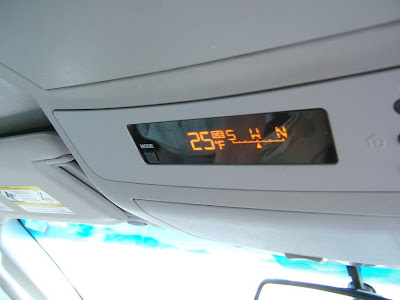 Finally, we came to a point where we had to decide if we were going to try to cut through the mountains on Highway 20 or if we were going to go north to I-70 and cut over to I-15, or if we would just stay on Highway 89. Dad had suggested just staying on Hwy 89, but with the snow on the roads earlier, we decided I-70 might be better because it would have been more readily plowed than the backroads would have been if there were a bit of snow during the night. However, some people we ate breakfast with at the hotel also had told us they had come across Hwy 20 yesterday and it was clear. So, we continued up through Panguitch and decided we would let the Spirit guide us. As we approached the turnoff for Hwy 20, we could see semi-trucks and cars coming easily out of the mountains so we felt okay to go that way. The road was just a little wet and just a couple of little patches where there was some snow, but not bad at all. Nice! We just cut off a bunch of time and miles! Plus, we get to stop in Beaver for cheese curd! 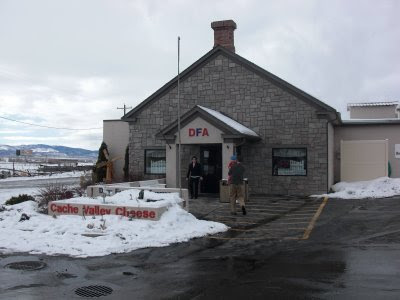 Stopping in Beaver at the Cache Valley Cheese Chalet is a must. They had just brought out some fresh, room temperature cheese curd while were there. I grabbed two bags. Yum! It was so squeeky on my teeth! Loved it!!! (But, I quickly found out/remembered what cheese curd does to me - makes me swell up like crazy!) 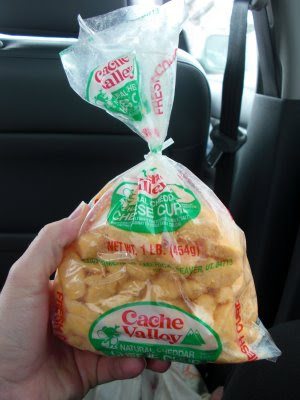 Back on our way....we jumped back onto I-15 and headed on up the road. One really cool thing we saw was this new speed limit! 80 MPH! 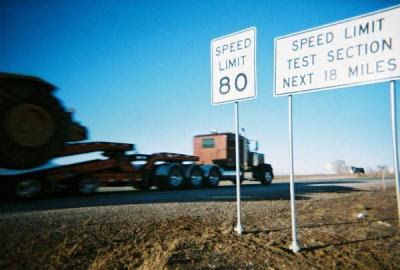 It's only in certain sections, but it was great because it helped us get there even faster without having to worry about speeding and getting a ticket. I kept trying to take a picture of the sign, but just never could, so this picture is courtesy of someone else whose husband actually stopped and let her take a picture of the sign (love ya honey).

As we started getting closer and closer to the Utah Valley area, it finally began to snow. Huge flakes were falling and it was actually really beautiful. We called Jen to let her know we were almost there. We agreed to meet for lunch at Los Hermanos. We had a good time, but something made my tummy really sick, really quick (maybe the half bag of cheese curds I'd eaten? Nah, I think it was something at the restaurant because cheese binds, if you know what I mean, but who knows?!?!). We headed to Walmart after lunch to pick up a few things and then to Jen's house.

We had planned to do some canning of food storage stuff while we were there so she had picked up 50 pounds of sugar for me and 50 pounds of flour. She also had my spaghetti and egg noodles that Dad had gotten me from the pasta factory a while back. Jonah and C helped us since I wasn't feeling too well. Jen and I filled all the cans while we waited for the canner to arrive from her friend's house. Then, Jonah and I put all the labels on the cans and once the canner arrived, Jonah and C did all the oxy packs and lids while Jen was the canning maniac! 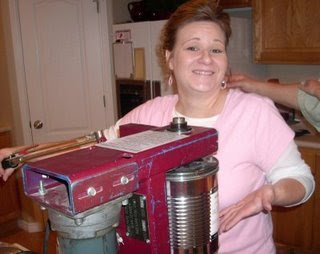 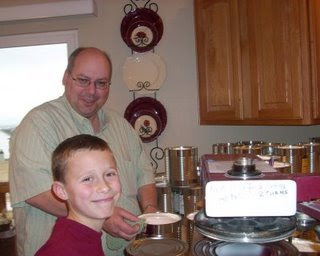 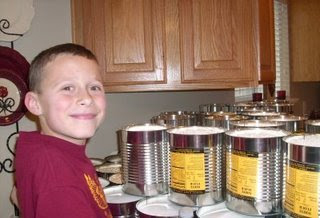 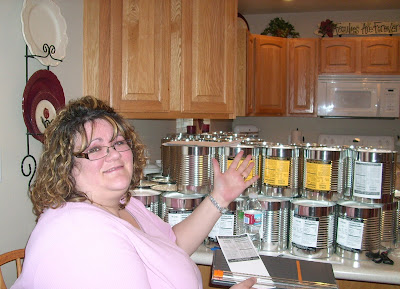 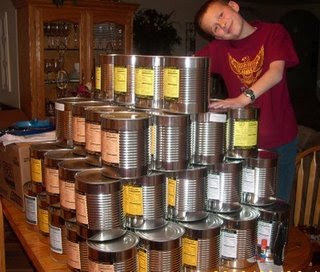 We finally cleaned up, got everything packed up, and then loaded our things in the truck. I would have liked to have stayed longer and had dinner with Jen and her family, but it was now late and we still needed to go to Kurt's to drop off Dylan's horse.

The story about the horse.....The year that we went to Utah as a surprise for Christmas was the year that Dylan wanted a horse. Of course, he wasn't going to get a real horse. But, we bought him a really nice, you know, horse statue of sorts. Okay, cool, but lame. It can sit on a shelf. It can get its legs broken. It's just a lame kind of horse. Well, C had seen this particular Butterscotch Pony at work during the Christmas season and had suggested buying it for Dylan. It was $250! No way, C. That's way too much! Yeah, the horse is cool and all, but way too expensive. Well, after Christmas was over, they had the display available via employee silent auction. C bid and didn't win. Someone else won, but then they decided against it or something and it was back up for auction. C bid and won this time. Yeah, he paid way too much, but at least it wasn't as much as the original price! So, this horse sat in our garage for almost a year and a half, waiting to go to Utah to be Dylan's horse. The thing that's so cool about this horse is that it is interactive. It responds to touch, etc. It comes with a brush to brush it's coat and a carrot to feed it. It was so exciting to bring it in to the living room at Kurt's house. Dylan was shocked! It was a lot of fun to see all the kids playing with it. Too bad it needed new batteries though (or so we thought - eventually Noah got it to work just fine!).

We got to watch all of Kurt and Ang's kids, including new little Miss Holly, who is just the cutest little thing, as well as Kevin and Jodi's Ari while they all went up to the church to set up tables for the party the next day. I held Miss Holly the whole time and she just slept on my chest.

After we left Kurt and Ang's we headed to Kev and Jodi's. We visited for a bit, put Ari down to bed, and then we all headed for bed too. It was going to be a very busy and long day tomorrow!