At the Bahia and Soakin' Up the Sun

This was the view from our room this morning! The last of the marine layer is burning off quickly. The sky is extraordinarily blue, the water just lovely and lapping at the shore, and the temperature perfect. 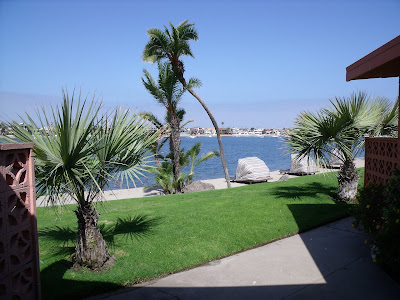 As we went to leave for breakfast, Melon Man wanted me to take this picture of him. He was all intent on showing it to his friends at work. Yet...once again...he didn't smile! 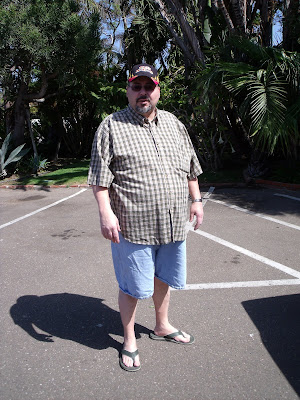 So, we had found this morning's breakfast restaurant to be highly recommended and highly awarded. Melon Man got a kick out its name from the minute I told it to him and has been saying it over and over. We headed out, using the GPS, to find it. It was in University Heights and was a little difficult to find at first because Melon Man wouldn't just listen to the GPS woman. Once we found it, we found a perfect parking spot out front and loaded up the meter with change.

For as many rave reviews as I'd read about this place, I was shocked that there wasn't a line - but, it WAS a Monday morning and around 10:30 when we arrived. We were actually able to walk right in. However...there were very few spots left to sit and the seating was VERY close together. I felt as if the folks next to us were actually part of our party! It was definitely a different place. The word Melon Man used to describe it was "eclectic" and it truly was. Our waitress was covered from head to toe in tattoos. There was a buzz about the restaurant that told us that this place was special and was going to be great. The energy was phenomenal. We asked our waitress for recommendations and reviewed the menu a little more. Melon Man ordered "a" pancake with sausage and eggs. Have you ever seen a pancake as huge as this one?!?!? 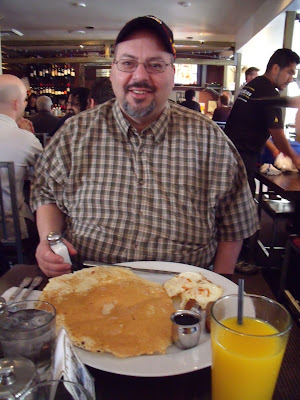 I ordered the Roasted Chicken Hash. Oh MY! Crispy potatoes with shredded roasted chicken, garlic, onions, asparagus, avocado, cheese, and eggs, a biscuit with a rosemary sprig, and a piece of watermelon...all served in a square cast iron frying pan. I even took some of the rosemary leaves off the sprig and ripped them up and added them to the rest of the goodness. It was ABSOLUTELY the BEST breakfast I have EVER eaten! 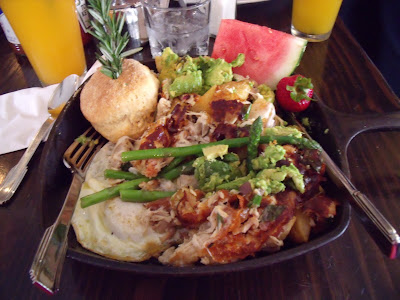 Melon Man's pancake was 12-14 inches across and was served on a platter! It was at least an inch thick too! He tried to eat all of his pancake, but couldn't. I was completely shocked. 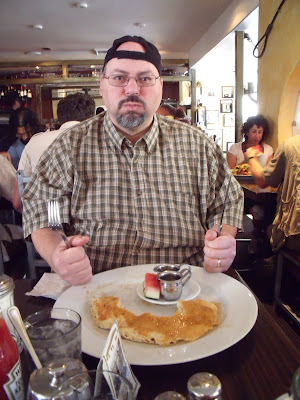 Of course, I couldn't eat all of mine either. We both tried to eat all of our food...because it SO GOOD...but there was so much that it was completely impossible. Oh, how I wish I could have finished it, but I just couldn't, no matter how much I tried...so I just ate the best stuff. 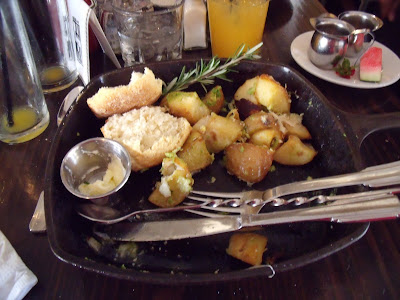 After we literally "rolled" out of the restaurant and past the line that had now formed for the lunch hour, we plugged the address of the South Sun Beads store into the GPS and headed out to find it. We laughed and laughed every time the GPS woman would say "Rosecrans." It's supposed to be pronounced Rose-crans, but she would pronounce it Ross-a-crans. From that moment on, we pronounced it that way the rest of the trip, always accompanied by a chuckle or two. 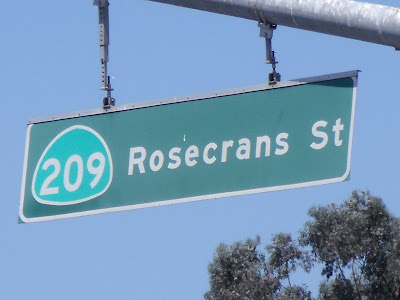 After we left the bead store, we headed back to the hotel. We were both kind of sleepy from our breakfast...but obviously, Melon Man was a little more tired than I was! 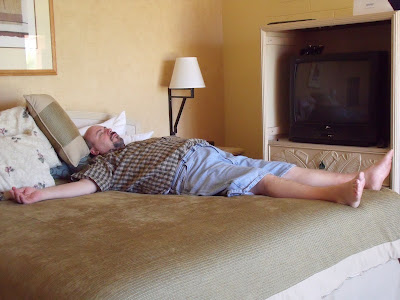 So...since Melon Man was asleep...again...I decided to head out to our cabana on the beach. I took my index cards and pencil to work on my presentation about the new food storage method I was going to be presenting at Enrichment on Thursday. I decided first to capture a few pictures of the wonderful surroundings... 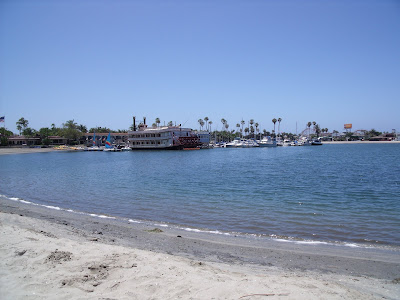 The Bahia Belle is an old Mississippi style boat that runs around the bay on certain nights. We really wanted to take a ride on it, but all schedules we saw said it wasn't going to be running while we were there. We were especially bummed when we saw it pull out into the bay later in the day. 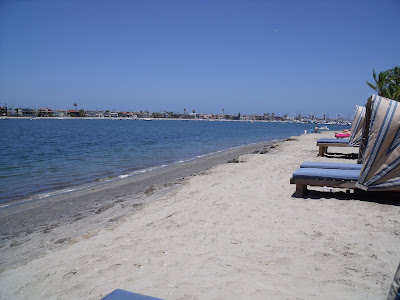 Eventually, Cabana Boy, I mean Melon Man, joined me out in the cabana. We sat there for quite a while. It was just so relaxing! 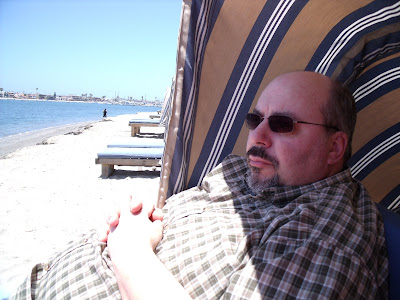 Taking a picture of us...Fatty Girl and Melon Man...okay, who sits on a beach in a cabana with normal clothes on? Us, I guess...if we didn't have our normal clothes on, someone would surely have called Green Peace about the two beached whales in the cabana! 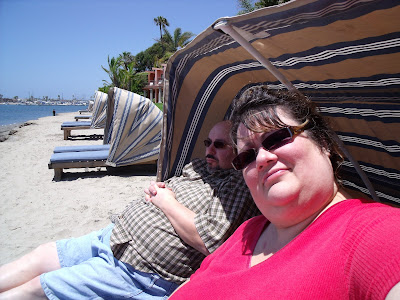 Finally, Melon Man decided to take off his shirt and try to get a tan. I was already burning on my arms and legs with the reflection off the water. I soon developed a very nice line on my wrist where my watch was...in just an hour or two! 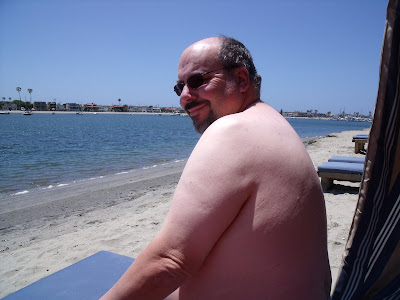 We finally decided to go in and get ready for dinner. Tonight was the night we had planned to go to Royal India to try the indian food buffet. We were a little disappointed when we arrived though because they had discontinued the Monday night buffet back in March. Oh well. We just decided to enjoy the atmosphere, cool indian music, and the neat decor. 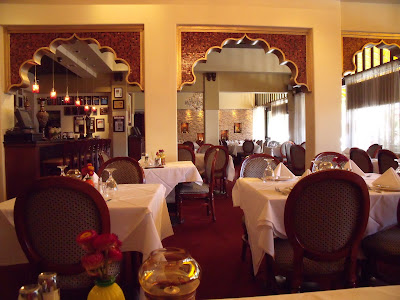 We were a little worried when we were the only couple in the restaurant at 6:30 p.m. besides two other tables, but there were plenty of awards up on the wall so I knew there had to be a reason. (Update: I have since come to find out that Indian people don't normally eat dinner until typically around 9 p.m.) 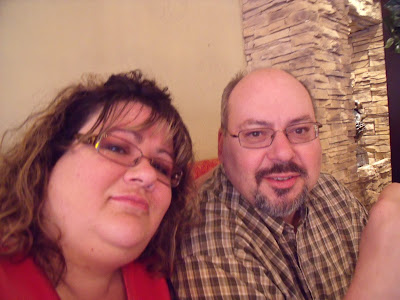 Ugly picture of us...it's so hard to get a good picture of us when we have to take it ourselves. Man, I need a haircut and color... 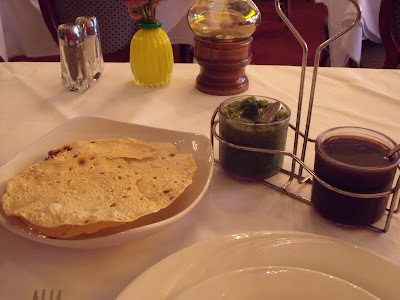 The first course they brought out was the pappas (I think that's what it's called). It was a super thin, almost tortilla-like crisp. In the two jars were what the waitress called chutneys, but I always thought a chutney was kind of chunky. The one on the right was brown and was a tamarind sauce which was sweet. The one on the left was similar to a chimichurri sauce. It was made from cilantro, mint, and chiles and was spicy. Both were fabulous. They tasted great separately and mixed together! 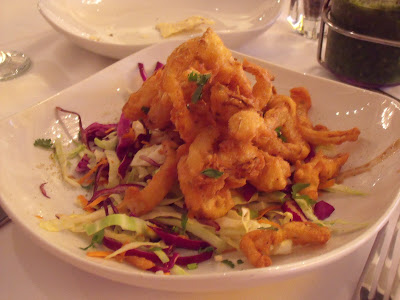 We ordered the Bhaji appetizer. It was battered onion pieces. Yummy. (Update: This was the second plate of onion-stuff Melon Man had eaten in 24 hours. Needless to say...it would be a majorly stinky time in our room that night! Onions do not mix well with Melon Man!) 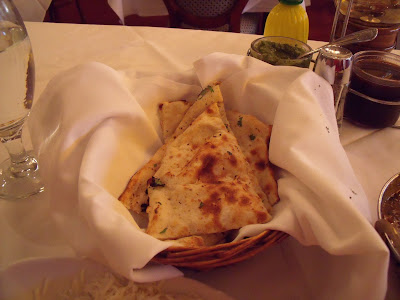 We had heard that the nan (flat bread) was highly recommended so we ordered the garlic cheese nan. It was SOOOOO good. We could have ordered more, but it was $5 for 4 small slices so we didn't. 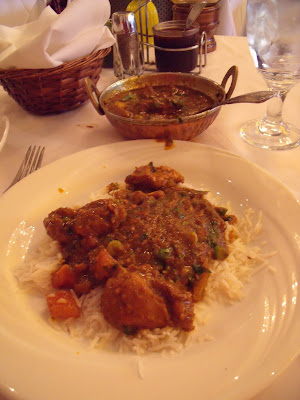 This is my chicken curry dish that I ordered. It was called Madras curry and was medium spicy. It was somewhat different from what I thought it would taste like, but was very good. I imagined all curries to taste like the yellow curry that I used in Chicken Broccoli Casserole, but they don't. I didn't get a picture of Melon Man's curry, but it was really good. I liked his and he liked mine. We could have switched, but didn't. It was a really good night and we enjoyed the Indian food very much. We decided to pass on dessert at the restaurant. 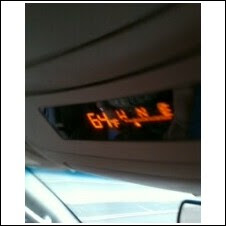 As we left the restaurant and headed to La Jolla (probably pronounced by the GPS woman as Law Jo-la), we looked up and saw the temperature...64 degrees. It was actually quite cool! We drove up to La Jolla, had our traditional ice cream at Baskin Robbins, and then sat parked over a cliff watching the sun set and the surf crash against the rocks. It was sweet just sitting there holding hands, talking and watching the beauty of the ocean. We headed back to our room at the resort....and, dot, dot, dot...

I could go for some of the sitting at the beach. I love the sound of the ocean. So calming.