On Our Way to San Diego! 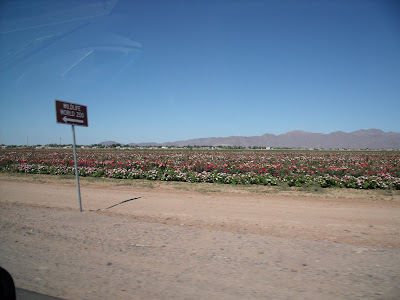 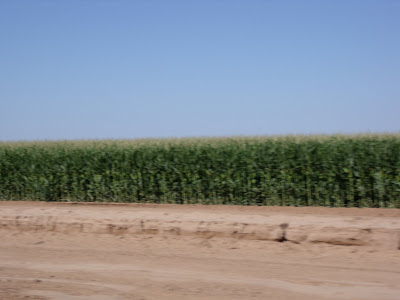 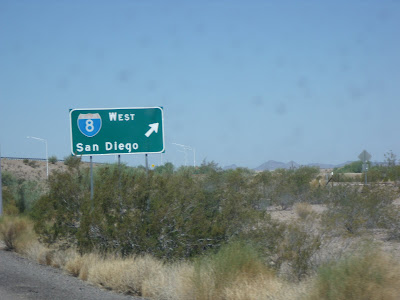 We're on our way! We dropped Dog off at the PetsHotel this morning and he was so excited that he peed all over the desk and the floor and everything when we got there! We were only about 1/2 an hour late leaving so it wasn't too bad.

Look at this picture....Melon Man's actually smiling on his own without having me tell him to smile for the picture. That goes to show just how excited he is to get to San Diego! 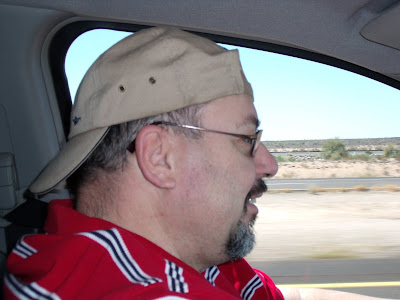 We had a very lovely drive out to Gila Bend, where we stopped for a "lovely" Father's Day breakfast at McDonald's...Melon Man's favorite...(not really, but he DOES like McD's for some reason).

While there, Dad called. We got to wish him Happy Father's Day while we ate and then we headed on our way. Melon Man also called his dad to wish him Happy Father's Day. The drive to CA was lovely. I read a little, slept a little, we talked a little, we just enjoyed the ride. I took pictures of a lot of things as we drove, trying to get used to my new Point and Shoot camera (some pictures turned out...some didn't). 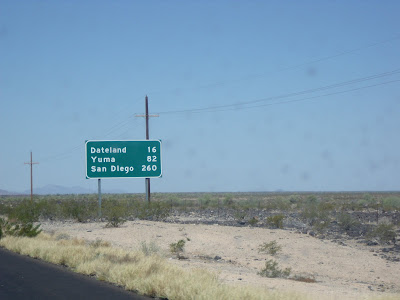 I saw things I didn't recall seeing before or I saw things that invoked in me a different thought than ever before. For example, check out this picture... 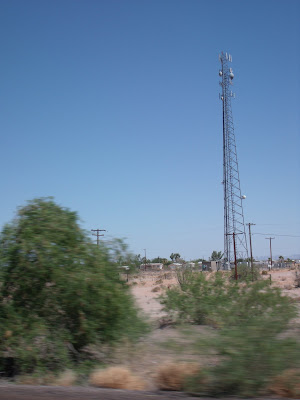 It's just a picture of a radio or cell tower. But rather than think of that, all I could think of was this: 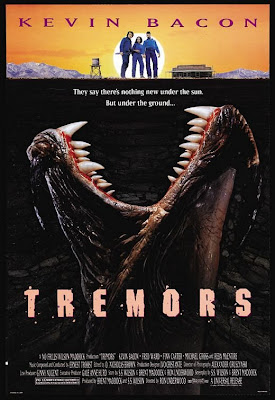 Yes, the movie Tremors with Kevin Bacon (super cute, by the way - man, not movie). There is a point in the movie where Kevin and his buddy are driving out past this old man's farm and things just don't appear right. They look at the tower nearby and see the old man clinging for dear life, high up above the ground. Then, they discover he's dead. Ew... They can't figure out what scared him enough to climb up there and then die. Until they come across one of these... 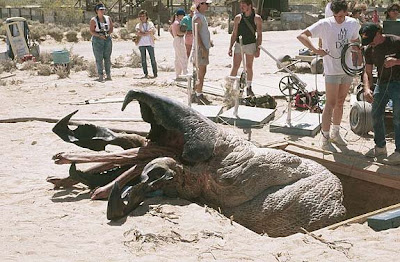 A graboid, as they named them. This monster comes from the ground and knows where you are from the vibrations you set off as you walk or run or just breathe. They grab you up and gobble you down. Good thing they are just in a movie, but still, these are the images that came to mind when I saw these towers along the road! 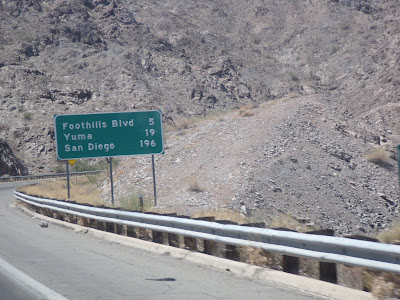 We were significantly amazed at how many Border Patrol vehicles we saw along the way and also how many times we saw border check points. I felt like I was in a foreign country where they have stuff like this, not in the land of the free. But, I guess that we were so close to the border that stuff like this is necessary. We even saw a helicopter searching for someone as we went through Rockland (as I like to call it). 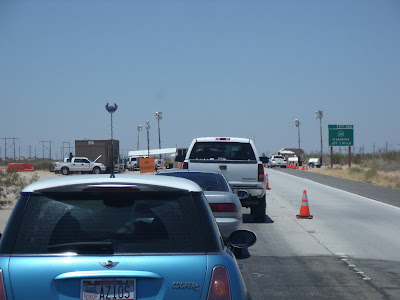 This is one of my favorite parts of the drive - the sand dunes. This picture does not do it justice, but Melon Man will never stop to let me take a picture. Those two little dots at the top of the dune are two four-wheelers that were stopped for some reason. I guess I could have zoomed in, but I like the proportionality of the picture...two little dots in a great big sea of sand. 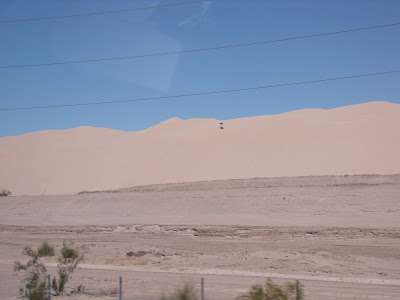 For some reason, every time we travel to CA and I see the windmills, whether these or the ones outside of Palm Springs, I ALWAYS have to take a picture or four or twenty. I don't know why. They don't change any. They are always the same. But, I always am intrigued by them. So, just bear with me... 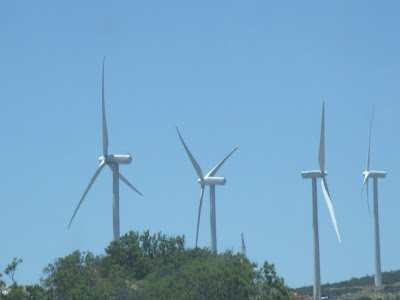 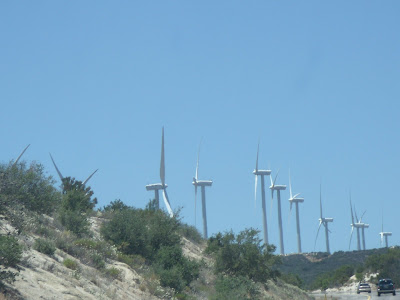 As we came down into the San Diego area out of the mountains, we expected to see "the marine layer" but it had already burned off for the day and it was just clear, sunny, and lovely. 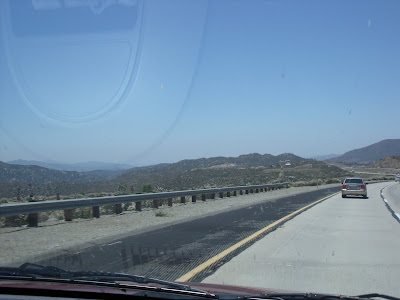 Check out this little video we made...

So...we decided to try the Bahia Resort this time. Talk about time warp. I felt like I was in my college dorm with the painted brick walls and older style furniture. Melon Man really liked the hotel, but I am a more modern, up-to-date kind of gal. Next time, it's the Hyatt Islandia all the way baby!

When we first arrived, our room wasn't ready so we had lunch at the hotel restaurant. Talk about expensive...$60 for two people for lunch! We had driven around town for about an hour or more looking for a decent place to eat, but because it was Father's Day, every good place had a line...especially Phil's BBQ! It was out the door, across the front of the building, past the 21 minute 14 seconds marker, and twice as long down the side of the building. We passed on that. We decided against Filippi's because we'd just had pizza yesterday. We decided to head to Hodad's in Ocean Beach. Bad idea. EVERYONE was at the beaches today. It was such a lovely day, they couldn't resist. Nor could they resist a Hodadie's burger, I guess. That line was long too and again, no parking. So, we just headed back to the hotel for lunch. It was alright, but nothing to spend more time writing about other than to explain these two pictures....this is the shrimp cocktail we decided to order as an appetizer. It was pretty good, but then what shrimp cocktail isn't? 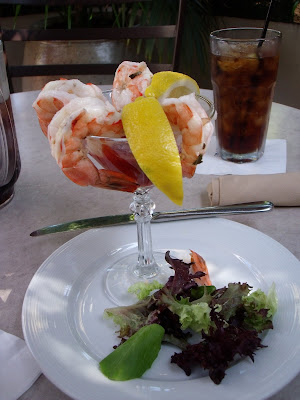 And, here is Melon Man - Mr. Smiles - because he's on "Bay-cation" in lovely San Diego. I have no idea who he was calling, but he's happy and that's good. Now, if I could just get happy. Too many people around for me...that's why I like to go to SD in the early spring or late summer/early fall. 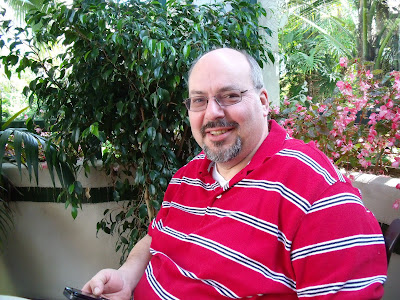 After we finished eating, we wandered over to the seals that they have at the resort. These two seals were having a grand old time just laying there in the sun, having everyone look at them. This gray one on the right looked up at me one time and I started talking to it. He then stuck his face right down in the water as if to get a drink or such and then came up and his face appeared black from the water on his gray skin. He just looked at me like, "Whatever, lady. Take all the pictures you want and talk smack to me all you want, but I ain't movin'." 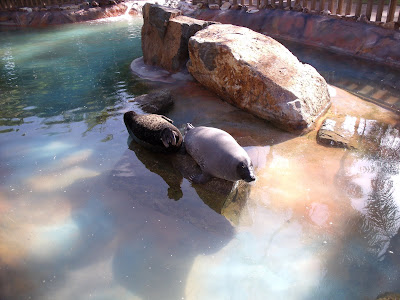 There were also these ginormous hibiscus flowers all over the property. I wanted to cut one off and put it in my hair, or gather enough for a bouquet for our room, but decided against it. They were about 7 to 8 inches across. Huge! 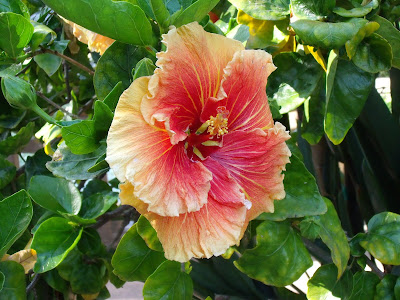 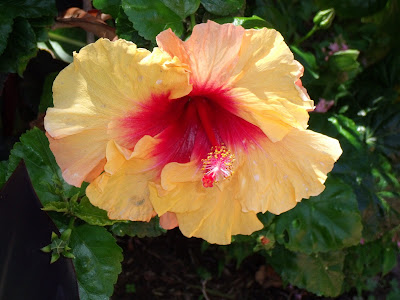 So, after that, we finally were able to get into our room. We had reserved a "Bay Front King" room with a private patio and access to the bay beach. The room was just a room with a small bathroom and very tiny sink area. It sort of looked like this - at least the view did, not so much the room. 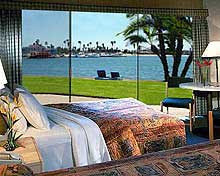 The TV was in a small armoire that they'd had to take the doors off of because it was so close to the bed. At least it would be easy to see while we laid in bed at night! We made do. We weren't there to spend all our time in the room. It was kind of a cute little bungalow with a parking spot right out front...except when someone else decided they wanted to park there...but we found another spot that was actually easier for us to get in and out of in the big red truck. 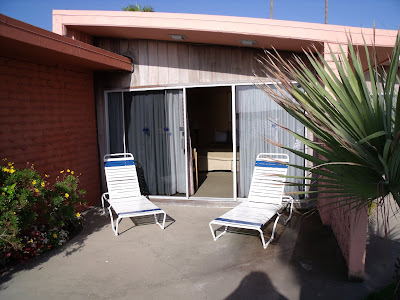 This is looking at the back of our bungalow which faced the bay in the picture below. The sun is so powerful and hot that comes off the water through the glass that it had begun eating away at the drapes and it looked like stars glistening in the dark if we pulled our drapes closed during the day! 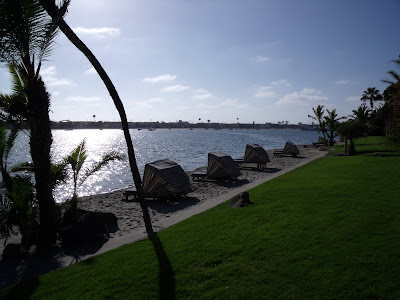 This is the view from our room. Lovely. We have total access to this private beach. I hope to get a lovely evening/sunset view picture from this view.

We unpacked, turned the A/C on as high as it would go and attempted to cool down our room. The room was SO HOT because the wall that looked out over the water was a huge sliding glass door and the drapes were open until we got there, so all the heat had come in the room - without the A/C being on at all. We laid down, quickly fell asleep due to the heat in the room, and took a Sunday afternoon nap for about 3 hours. Finally, around 8:30 p.m., we got up, got dressed, and headed off to Phil's BBQ for some dinner. 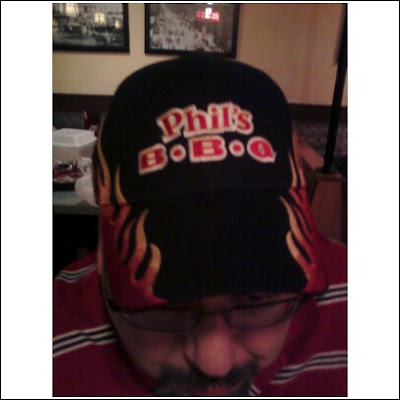 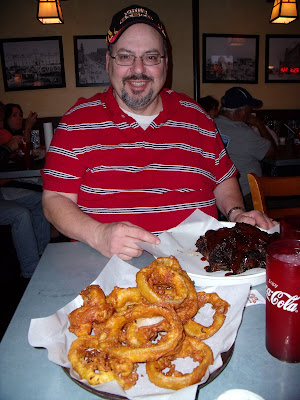 Seriously...this is the BEST BBQ place ever. The only thing that would make it better would be if they served Bobby Q's (a BBQ place here) mac & cheese. I would be in literal heaven. It was late enough when we got there at 9 that we only had to wait about 5 minutes or so. Our food was served fast and Melon Man found us a nice table. They had a plethora of sugar-free drinks (Fresca and orange pineapple Crystal Lite - our faves) too. I even picked up a Phil's BBQ hat as a souvenir for Melon Man as well. He could only eat 3 of his 5 beef ribs, so we took the other two back to the little fridge in our room, along with 3 long beef rib bones for the doggies at home. These onion rings are so good too. We got the large order to share and it was even too much for us. Look at that smile on Melon Man's face...he's in heaven!

We dozed off fairly early after that and soon dreamt of our breakfast to be the next morning at....Hash House a Go Go.....(that's okay...we thought it was a funny name too.)