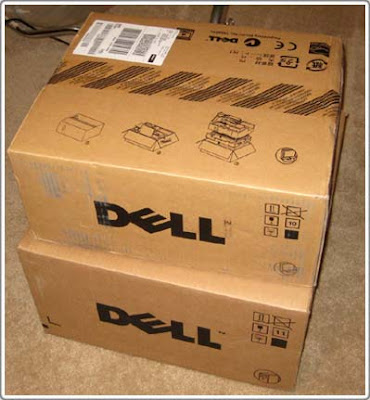 We ordered a new computer from Dell before we left for San Diego. We were told that it would arrive around the 29th of the month. Wrong. It actually was attempted to be delivered yesterday while we were gone! Wow! That was fast! So, I took off from work about an hour early today and raced home in case it was attempted to be delivered around the same time as yesterday. It finally showed up around 4:30. I'm so excited for it! It's got a 24" Hi-Definition widescreen flat-panel monitor! But...because the computer room needs to be rearranged first, I can't put it together yet. I just don't have the time. Maybe this Saturday...if not, it will have to wait until I come back from Chicago because I don't want to put it together until the room is ready. Work smart, not hard. There is such a mess of cords and such below the desk now that it would be horrible to try and put the new one into that catastrophe (plus it could actually cause a catastrophe if we did!).

Tonight is the first night of our Enrichment activity recipe exchange group. We're calling the group "Food Among Friends" Pretty cute name, even if I do say so myself! We're doing appetizers for our first get together and I am making Pioneer Woman's Mystery Rolls. They look easy, fast, and sound yummy. So...off I go! 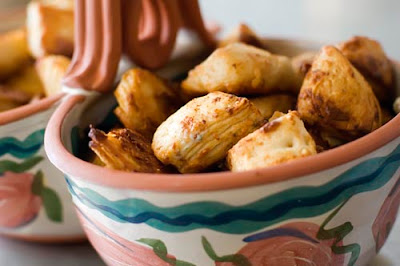 Update: Well, including myself, only 8 people showed up tonight. I was happy though because 3 of the sisters were of the older ladies and that was good. My mystery rolls turned out alright. I made a double batch though and that was way too many so they weren't as pretty as PW's. Oh well. They were still yummy, although Melon Man didn't think so because he doesn't like feta, gorgonzola, or bleu cheese.

Sounds like a fun RS activity. Keep us up to date with all the recipes, 'k?