I've had some requests for the recipe for our salad from yesterday, so here it is.

1 five pound bag of red potatoes
1 bunch of green onions
1 lb colby or cheddar cheese (the block kind that you have to grate, not the kind in the bag)
1-1/2 c sour cream
1/4 to 1/2 c mayonnaise
1 lb bacon
Salt and pepper to taste 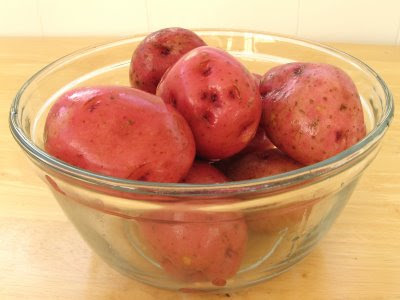 I prefer 'nuking' the potatoes versus boiling them or baking them. I have a little more control that way on how much they cook. You want to nuke them until they are just getting soft. You don't want them overdone, nor do you want them underdone and still crunchy. If you overcook them, they will fall apart in the salad. If they are crunchy, it won't be appetizing. Be sure to wash them first, but do not peel them.

I was able to put the entire 5 pounds of potatoes in my microwave on the turntable, with the biggest ones on the outside and the smaller ones on the inside. I nuked all of them for about 12 minutes, checked them, took out the smallest ones that were done, nuked the remainder for another 5 minutes, checked them again, took some more out, nuked the remainder for another 5 minutes, took all of the rest out except 3 bigger ones, and then nuked those for about 2 minutes. 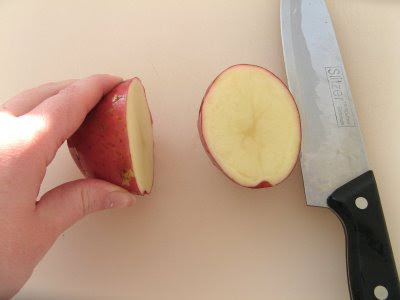 I then cut each one in half lengthwise to open them up and allow them to cool faster. 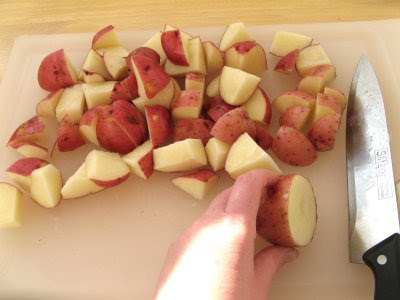 Once they were cool, I cut them into 1 inch by 1 inch pieces and dumped them into a big bowl. 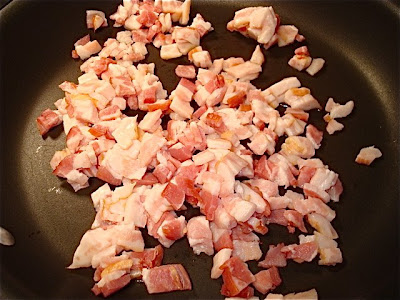 While the potatoes were cooling, I diced up my bacon and cooked it until it was just turning crisp. I'm not a big fan of burned bacon or super crispy bacon, so it was just right when I drained off the grease and set it aside to cool. 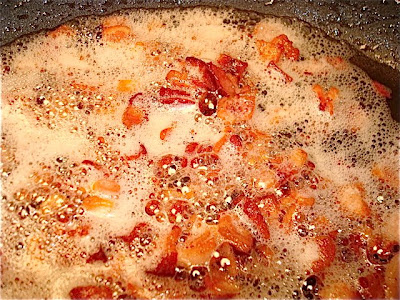 I then sliced up the entire bunch of green onions, including about 2 inches worth of the green part. Slice the onions pretty thin. You don't want overly big chunks of onion overpowering your taste buds with all this other goodness that's involved. I dumped all of that on top of the potatoes. 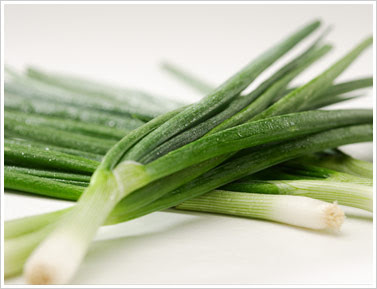 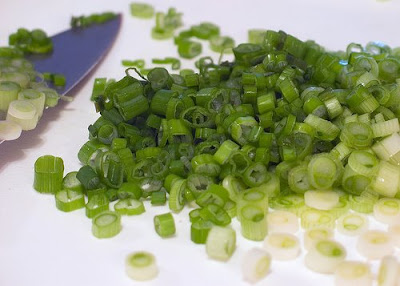 Next, grate your cheese. There are two reasons I do not use the kind of cheese that comes pre-grated in the bag: 1) It's dry because of the anti-clumping powder they put on it so it doesn't all stick together and I like moist-ish cheese, and 2) I like the thicker grate versus the small tiny Taco Bell style cheese grate. You can actually taste the cheese in the salad then. It only takes about 90 seconds to grate it, so I feel it's actually worth that 90 seconds for the taste you're going to get. Once you're done grating it, dump it in on top of the cool potatoes and green onions.

The bacon should be cool by now, so go ahead and dump it in too. Next, dump in the sour cream and mayonnaise. 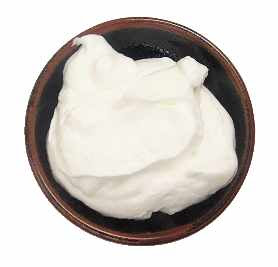 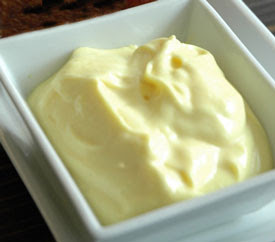 Mix everything together well. Add salt and pepper to taste. I think this salad's best when served not quite fully chilled. If you need to chill it to get it done before you are ready to eat it so you can finish off the rest of your dinner items, go ahead and do so, but then take it out of the fridge about 10-15 minutes before ready to eat. Don't worry, the mayo and sour cream won't spoil and make y'all sick in that amount of time! 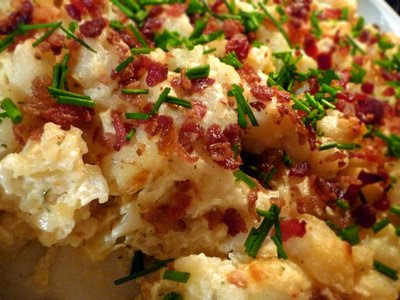 I have seen similar recipes that call for baking this conglomeration before serving. That would probably be good as a side dish instead of a "salad"! Enjoy!

Oh my! Thanks for posting the recipe and the great pictures with it. I'm DEFINITELY going to make this! I could just step into your blog and take a bite!