Today was Uncle Gene's funeral. It was held at Our Lady of Mt. Carmel Catholic Church in Tempe. I made us about two minutes late because I couldn't find one of my shoes so I ended up wearing my sandals instead. It was probably a good thing anyway, because wearing heels would have been bad for my knee with all the up/down we did. 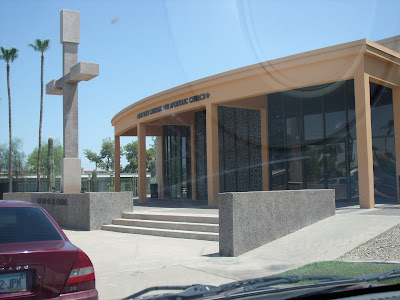 I have never been to a catholic church or catholic funeral service before. It was definitely different than that of an LDS service. A lot of up and down, a lot of repeating things after the priest says them. We did all of the up and down stuff, but not the repetition stuff because 1) we don't believe in repetitious prayers and 2) we didn't know them anyway.

I think the one thing that I noticed the most was that there was really nothing spoken of Uncle Gene and his life. There was one little tiny part, but that was it. It was mostly just a "mass" versus a tribute to his life. I was hoping there would be a few minutes sometime during the service that those who wanted to, could get up and say some words about Uncle Gene, but there wasn't. I had also hoped that Gene's brother, Melon Man's dad, would come to the funeral, but he didn't, so we stood in as representatives of the family. I don't know his reasons why, he just chose not to.

These are some pictures that I took of Melon Man and his cousins, etc. This first one is with Uncle Gene's daughter, Kathleen. The next one is Kathleen's two sons, Patrick and Benjamin. 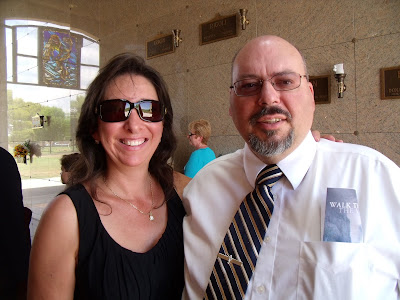 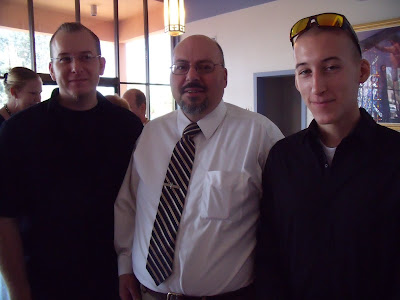 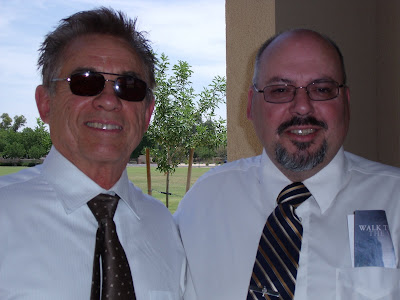 This last picture is of Lary and Melon Man. They are the only LDS members in the family, other than Lary's wife and kids. It is so great that they live here now. I really love them...they have been very nice to me since day one, meeting them in the care facility where Uncle Gene was for a few weeks.

After the service, we drove to the cemetery, about 10 miles away, where he was interred. He had been cremated so he was "buried" in a niche just outside of the mausoleum, next to his son, Peter Michael, who had been murdered a few years back.

While the priest was doing a little service in the mausoleum, I looked over to the side of where I was sitting and noticed this placard on the wall. This is one of my mother's ancestor's names. I was completely shocked. I was just drawn to it. I couldn't stop looking at it. (I came home and looked it up just to be sure and yes, I was correct. Elsa Pieczonka was born about 1784 in East Prussia. That is the only information I have on her other than who she married and then her daughter and downward. She is my great-great-great-great grandmother. How incredibly amazing it is that I knew this name. I truly feel that I was meant to see this name on the placard today! I now need to check and make sure her work has been done!) 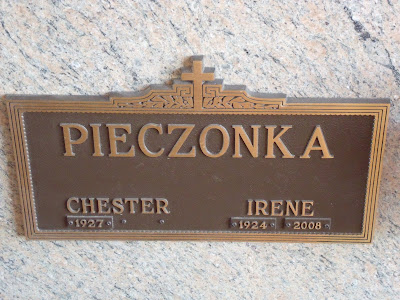 After the urn was placed in the wall outside, I was back inside talking with Lary, Terry, and Melon Man about the name. A young woman, who looked a lot like my cousin Sherry, walked inside with a birthday balloon. I didn't pay much attention to her until Terry pointed out that she was placing the balloon on the placard! I went over and began talking to her, telling her that this last name was that of my ancestors from long, long ago in eastern Europe. She seemed a little freaked out that a complete stranger would come up to her like this. She told me that today was her mother's birthday and that she died just about a year ago. She seemed very sad as I was at my own mother's birthday after she'd been gone a year. I apologized for intruding and left her to her sorrow.

We headed back to the church where the ladies had prepared a nice little luncheon. Someone had made a pan of delicious mostaccioli with sausage. It was to die for. I wish I could have gotten the recipe!

It was a very nice day with family. I am so glad Lary and Terry have moved here. We definitely need to plan something family-life so we can get together more often. Uncle Gene - thank you for being so nice to me and welcoming me from day one of meeting me. You were always so kind to me. I'll miss you. Love you.