From California to Utah

We had previously planned on leaving California at 6 a.m. because that was really 7 a.m. in Utah and we wanted to be there around 3 or 4 p.m. so we could go to Tai Pan or the Blue Chip store.  Well, we were just too worn out and Melon Man needed a little nookie this morning (I know...TMI), so we never got on the road until 8:45 - California time.  After saying good-bye to the fams at the other hotel, we were off in the big red truck, heading up the road toward Utah.  We decided to stop in Baker - home of the world's largest thermometer - for some breakfast.  Although you can't see it very well, the thermometer read 73*.  Lovely! 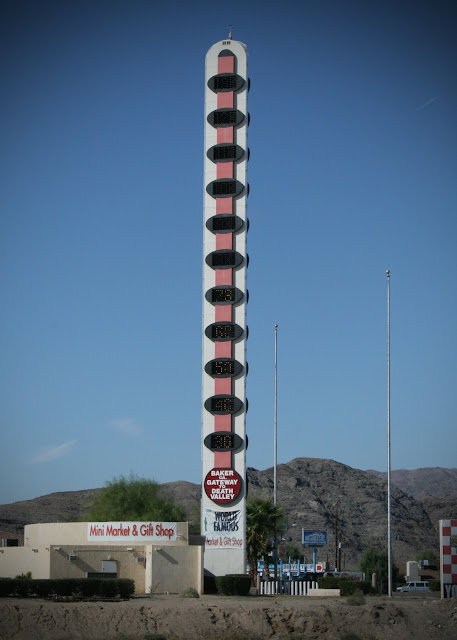 We decided to go to Del Taco.  Does a chicken burrito, a taco, a quesadilla, and a hamburger count as breakfast food?  By the way - that's for 2, not just me.  Melon Man went in to use the "facilities" and came out saying there were some pretty scary/odd people in there.  Soon, we were on our way again, but not before seeing the home of the "Best Gyros in the U.S." - this greek restaurant - and also Bob's Big Boy. 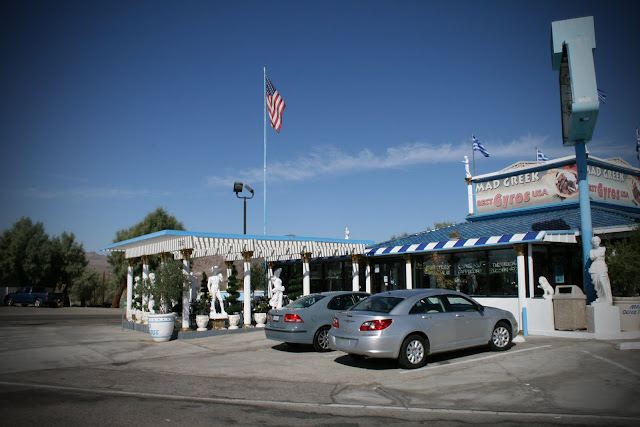 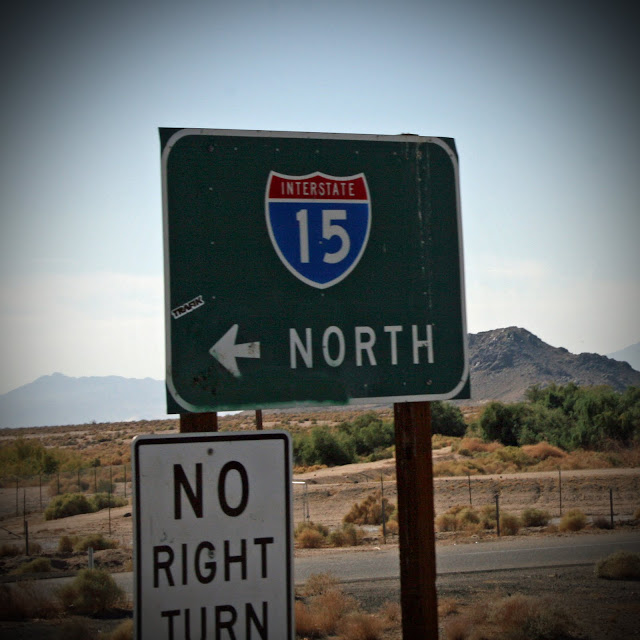 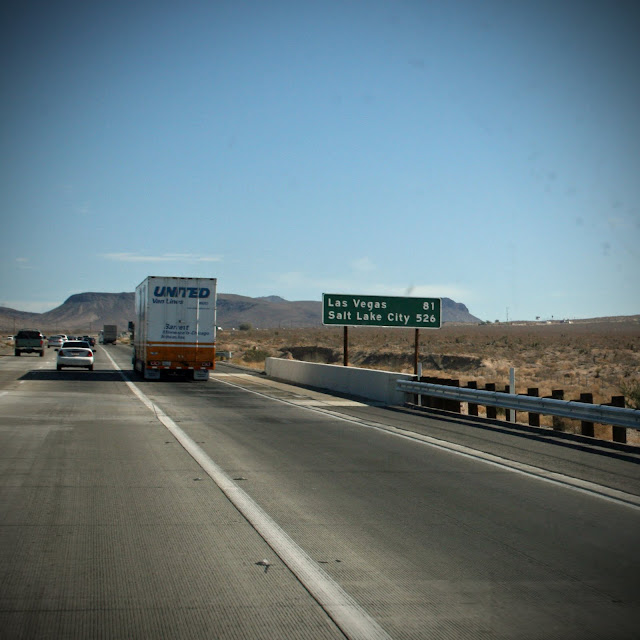 Look at that long, long, straight, straight road....are we there yet? 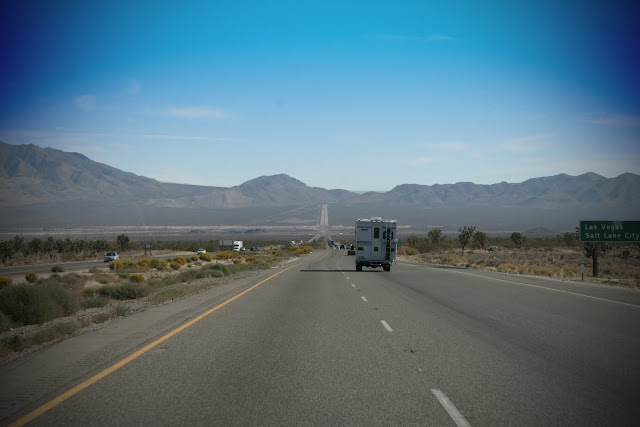 I wasn't feeling too well, so I slept off and on as we progressed on. We came in to Nevada finally and Melon Man had to....again, use the facilities. So, we stopped and got gas at the first exit in Nevada. I never even got any pictures of Las Vegas as we passed through. Man, has that town grown! I really wanted to stop and see my friend Shelli, but we knew this wasn't going to be able to happen this time due to all the miles we needed to cover to make it to SLC before dark. We will have to make a special trip to Vegas in the near future to make up for it. I felt really bad. I should have at least called, but I was feeling really ill and was quickly back to sleep. 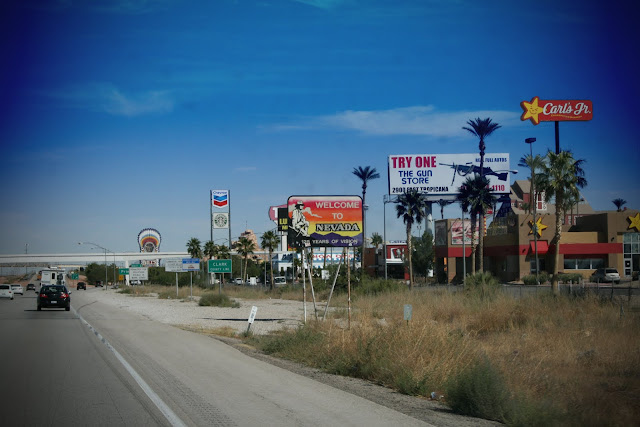 Okay, how many WalMart trucks can one person see on the road between Arizona, California, and Utah? This one was number 462. (Not really, but it seemed like it!) 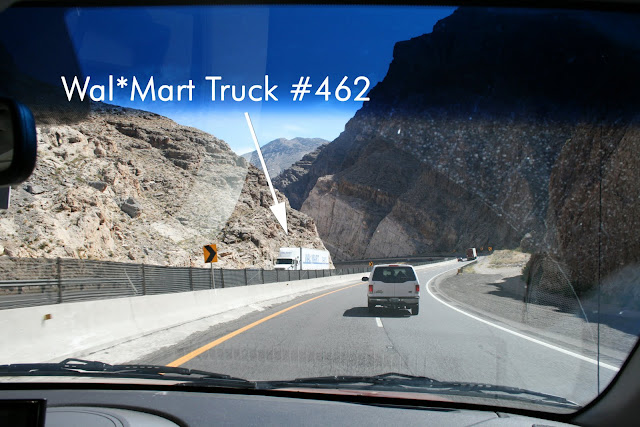 Finally! Utah! We soon cruised into St. George and finally "I" had to use the facilities. So, once again, we pulled into a gas station and then were on our way. 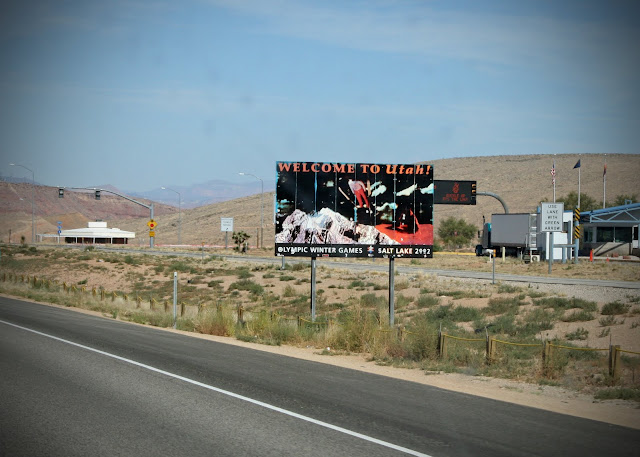 But, as we getting ready to get back on the freeway, Melon Man saw the temple - in all it's white glory - against the red rocks of St. George - and we decided to drive by it.  This is the picture we got: 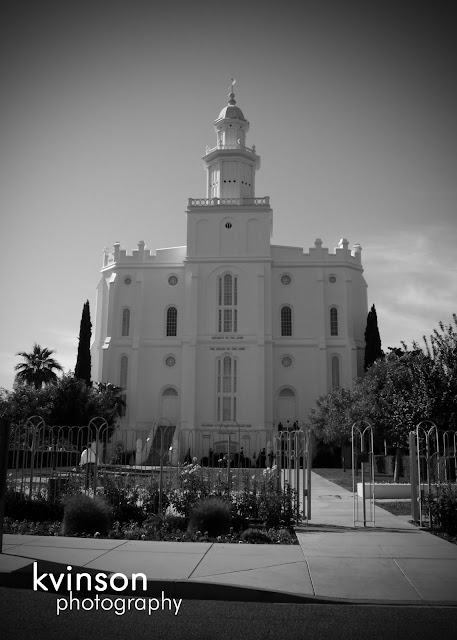 Pretty good picture of the temple that I took, even if I say so myself!  I would really like to do a session or two sometime.  This is the temple where my parents were married and sealed over 41 years ago.  What a sweet memory that would be to go there and share that memory!

We soon got back on the freeway after passing up ANOTHER Tai Pan and soon what to our wondering eyes should appear, but a WALMART oasis in the middle of the desert! Yep, a WalMart distribution center with about 200 WalMart trucks and trailers. Number 560, 561, 562... 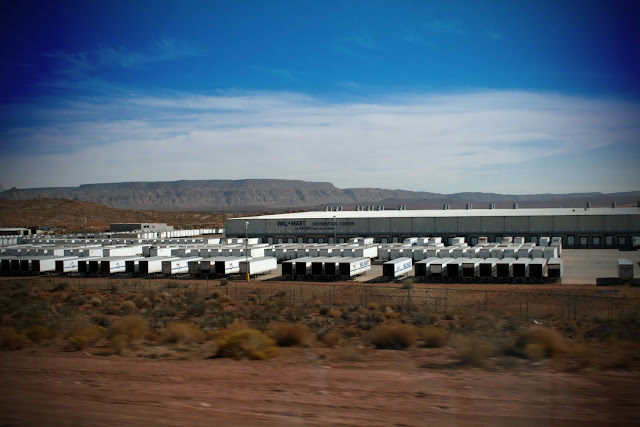 We continued on up the freeway, soon reaching Nephi, then Santaquin, then Payson, then Spanish Fork, and check out what we saw on the mountain top! SNOW! Awesome! We couldn't believe it. The picture doesn't really show the color on the mountain from this distance, but it was there, and so was the white stuff. LOVED it! 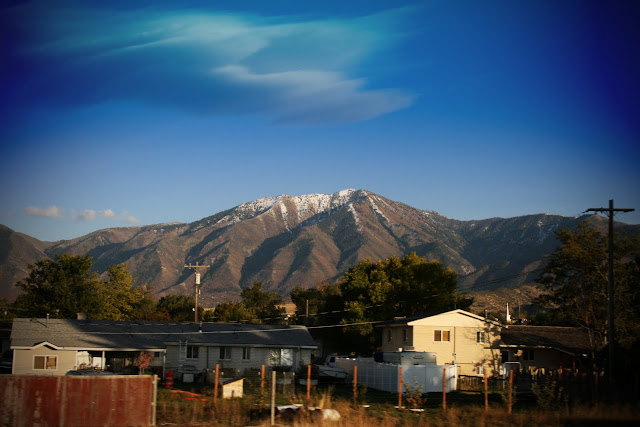 We pulled over in Springville to get gas and to....yes, let Melon Man use the facilities AGAIN.  This time, I jumped in the driver's seat and we were off.  We soon arrived at Julie's and we got our things brought in and put in our "new" room downstairs.  Brian and Julie had been working really hard to finish their basement in time for us to stay with them.  It was really nice having a good sized space for us to sleep and stay in while we were there.  Brian soon arrived with the memory foam beds from Jennifer's and they made up our bed for us and then we were off to Rodizio for dinner!

We had a 9 pm reservation for dinner thinking that we would need it on a Saturday night, but when we got there, the place was only about 25% full.  Soon, it started emptying out.  We had a fun time chatting, eating, and laughing.  The food wasn't nearly as good this time though and we chalked it up to the fact that it was late and it was kind of sitting around longer.  It came really quickly though!  There was this one piece of meat that Brian got though that was tough as leather......

I tried and tried to take pictures of the funny faces Brian was making about the piece of meat he was eating tasting like leather, but every stinkin' picture turned out blurry and dark.  I tried to take a video of it.  It didn't come out either.  I want to throw this camera against the wall.  I have had nothing but problems with it since I got it.  It is my little portable point and shoot from Fuji.  I wish I'd spent the $200 on the Canon Powershot I wanted to get, but I went less expensive since I have my fancy pants camera and now I'm regretting it.

Once we left, we dropped the guys off at home and Jules and I went to WalMart to finish up some grocery shopping for tomorrow.  We tried to hurry so we would get out of there before the midnight checkstand rollover that takes like 15 minutes, but she had forgotten to get a gift for her child so we were stuck.  Oh well.  We got home at about 12:30, got the stuff put away, and got ready for bed.  What a long day!  Good thing church isn't until 11:00 tomorrow!