Kolby's special day was in full swing - how cool - turning 12 AND receiving the priesthood on the SAME day!

Julie has a special birthday tradition in her house - the birthday person gets served breakfast in bed.  This year was no different even with Auntie Fatty Girl and Uncle Melon Man there!  This girl was going, going, all the time.  By the time we got upstairs, she'd already made a cake, browned 10 pounds of hamburger, cut up all the trimmings for the taco dinner, and was working on breakfast, plus, she'd already showered and her hair was drying!  She'll probably hate me for posting this picture of her with no makeup, but I thought it was a fun picture to remember the day by. 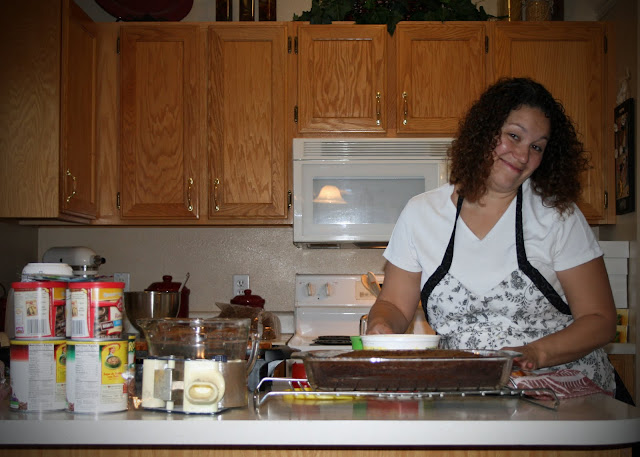 We all sang happy birthday to Jack when we brought breakfast in to him.  He was still asleep - or at least we believe he was!  I'm not sure he really was faking it...he looked pretty out of it! 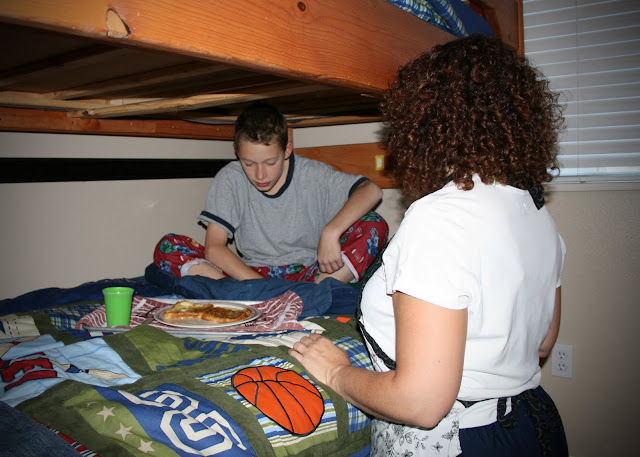 It was soon time to head to church.  We went to Sacrament meeting and part of Sunday School, then it was time to go meet up with the family outside in the hallway.  Soon, the bishop realized that we were a LOT of people and we had to find a much bigger space for all of us.  The ordination didn't take very long at all and soon it was time to put up all the chairs we'd just put down for all of us.

Receiving the Priesthood in our church is a very special thing.  It is special because it can always be traced back to the Savior through a lineage of authority.  When Melon Man recently received his ordination to High Priest, my dad ordained him.  Without going into a lot of details right now about all those in his line of authority, it was very comforting to me to know that the priesthood he holds comes through very righteous men, all the way back to our Savior.

After church was over, we headed back to Julie's house for a family dinner.  Kolby wanted to have tacos so we did it - non-traditional style - at least for our family.  We used pre-fab hard shells and non-fried soft shells - and you know what?  It was O.K.!  There were about 50 people there and to fry tacos for that many people would have just been impossible and horrifying!  We ate outside on their beautiful patio that Brian built.  It was overcast and quite cool, but it was just lovely.  We all grabbed a jacket or a blanket or whatever and we just enjoyed each other.  Here are some pictures...

Jennifer did really well even though she was still recovering from her surgery. 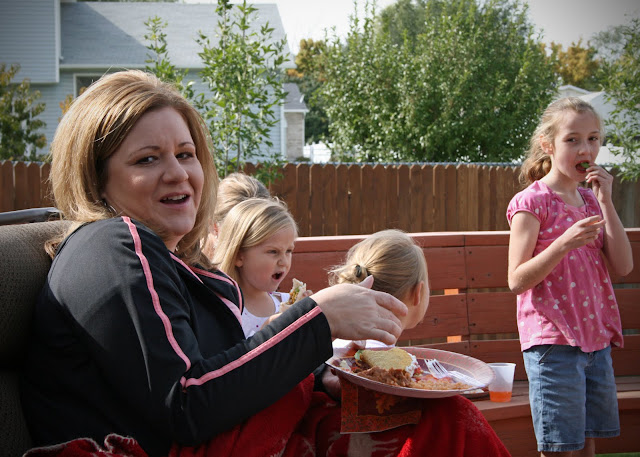 Colton just HAD to show us the food in his mouth! Gross, dude! 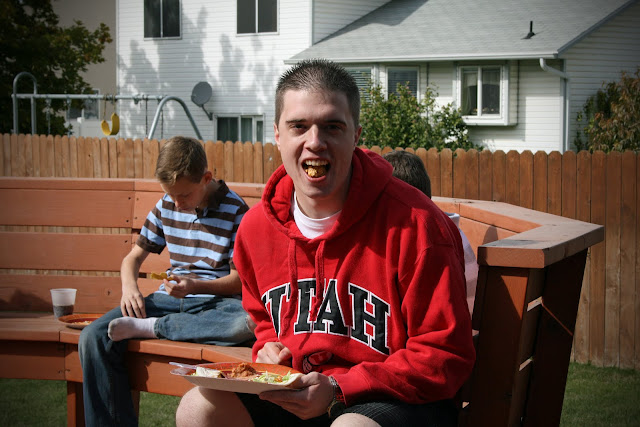 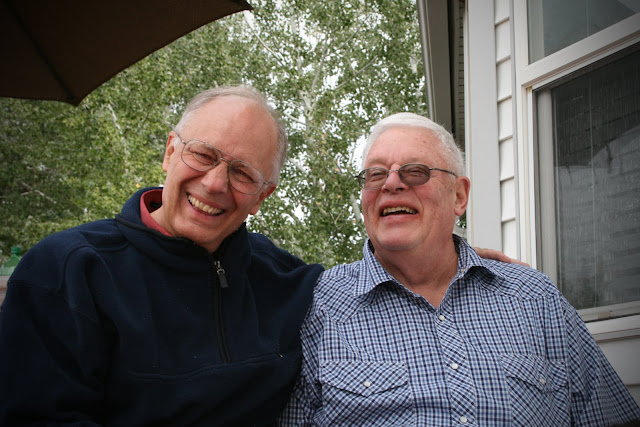 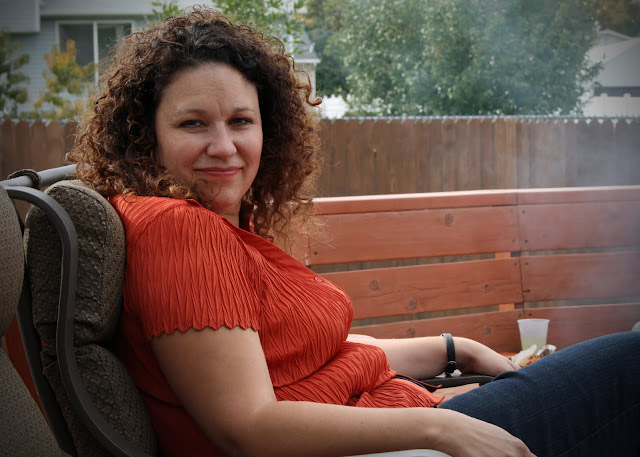 Taylor tossing a football to Colton or Carl. Looks like a quarterback in the making! 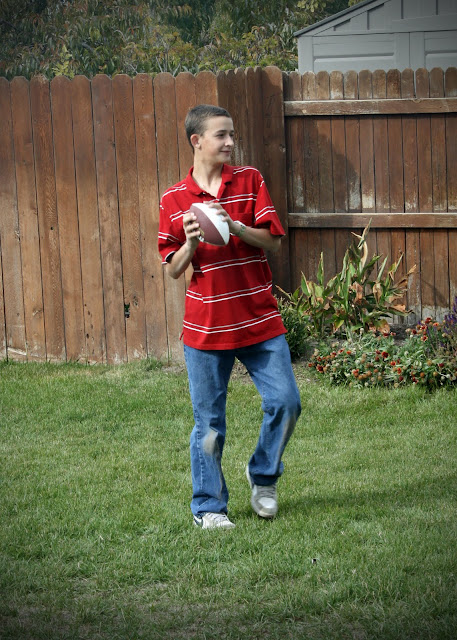 Cristobal with aunt Jodi-e-y. Don't freeze!  I just LOVE his hand on Jodi's. 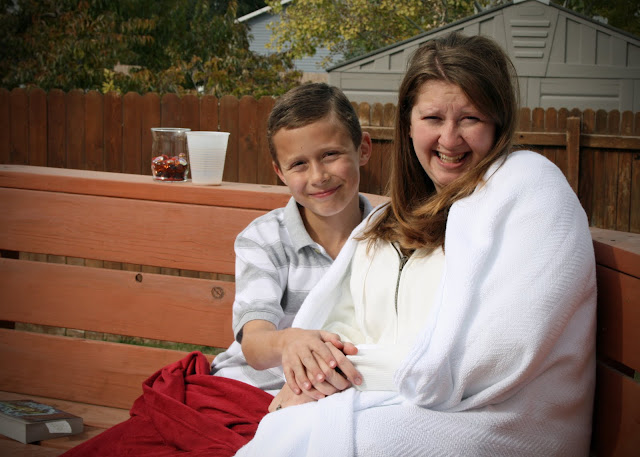 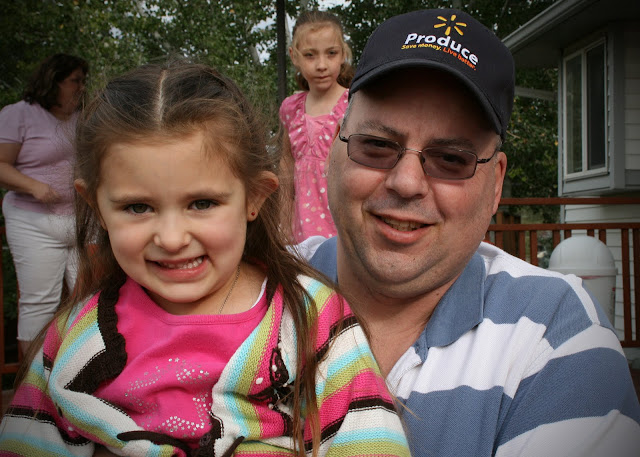 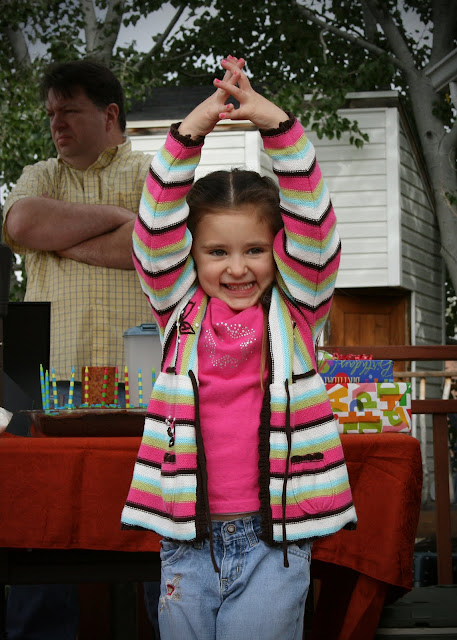 Finally, it was time for the cake. 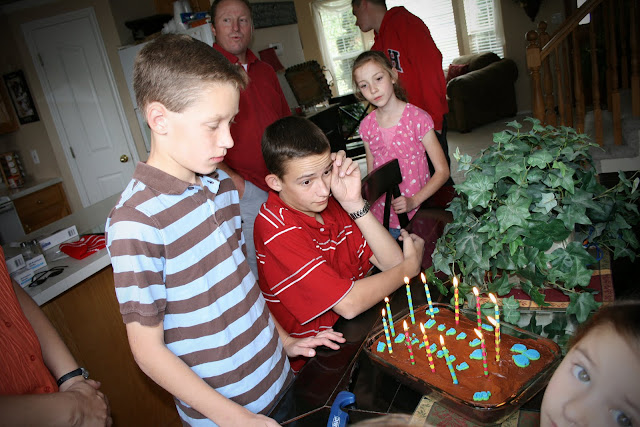 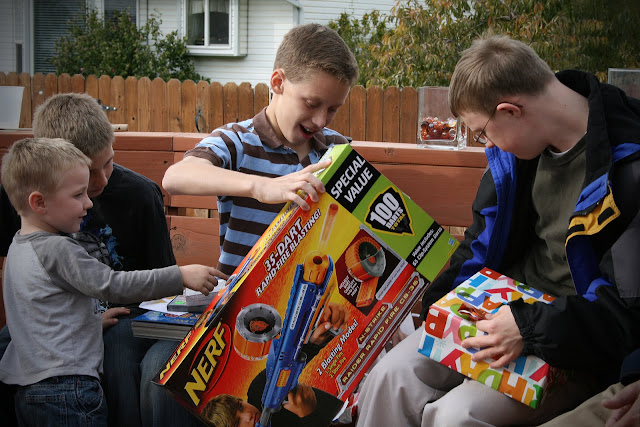 LOVE this picture...Mom and son. 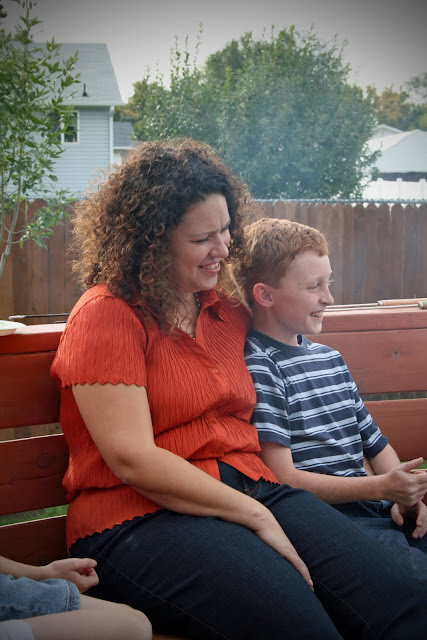 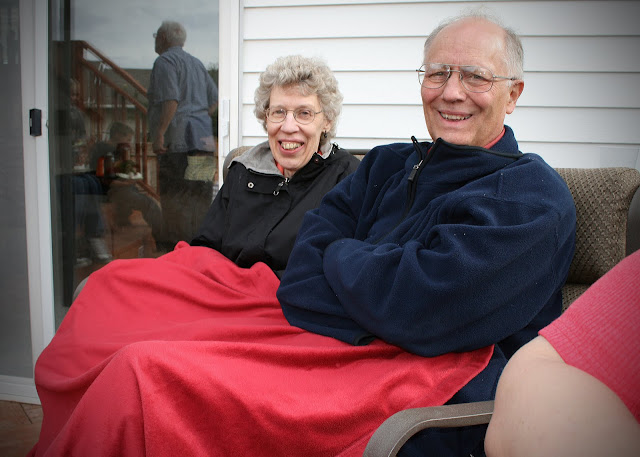 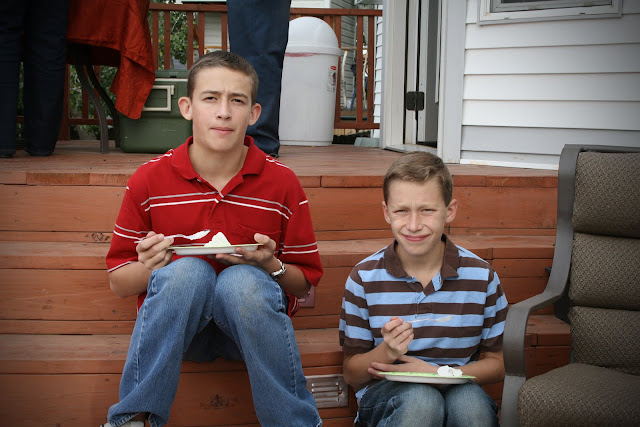 So this next picture totally caught my eye. Due to some things, Ari and Jennifer haven't seen each other in quite a long time. But, this picture tells it all - they were able to pick thinks right back up where they'd left off. They were just having an awesome little discussion. I love the looks on their faces - they are intent and involved. The two of them are just listening to each other as if best friends and not a care in the world. 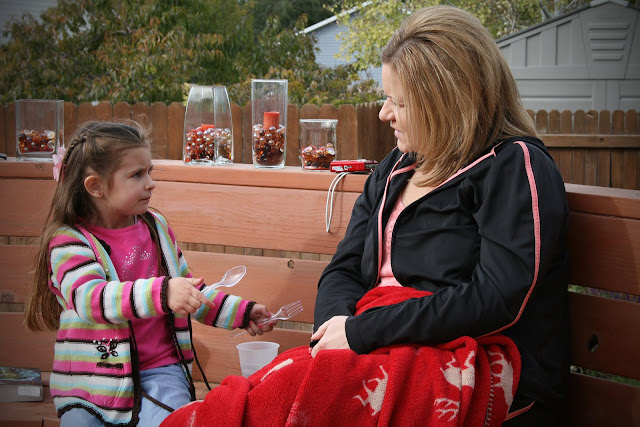 Carl is our cousin with Down Syndrome. We all just love him. He is now 19 years old. He came and sat down next to me after he had dished up his own cake and ice cream. I just had to capture what was on his plate... 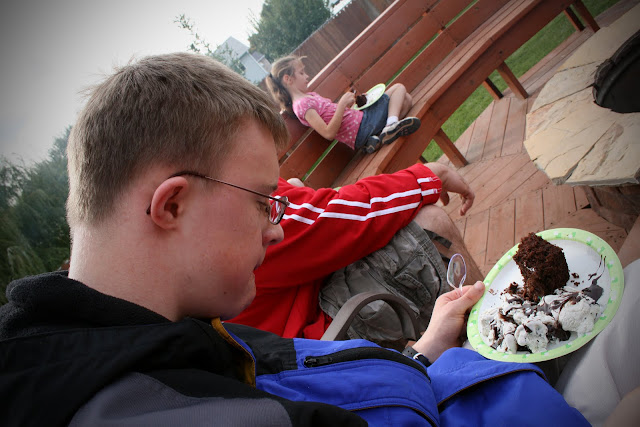 It was a big ol' chunk of cake with four funky globs of ice cream drenched in chocolate sauce. I would have been sick, but he ate every bite. 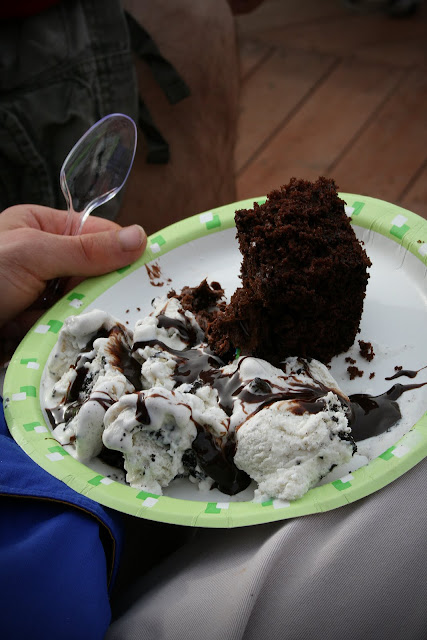 Soon it was cold enough that Kevin came out and built us a fire in the fire pit. It was so warm and inviting. Cristobal taught Peanut the art of roasting a marshmallow. 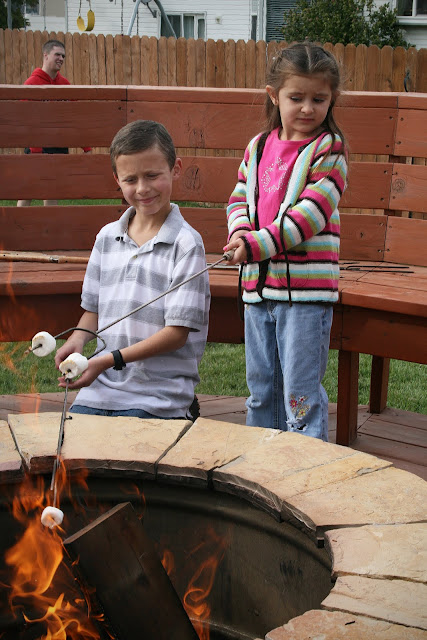 Soon, Daddy had to come out and finish for her while she visited with Aunt Jen. 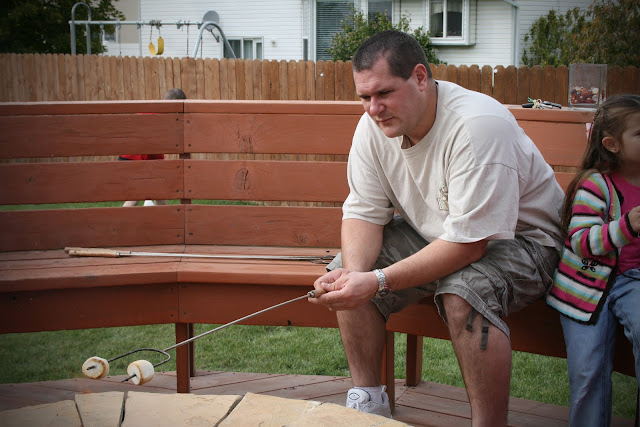 But, Cristobal, he was the perfect marshmallow roaster. His were golden brown and delicious. He loved every bite. 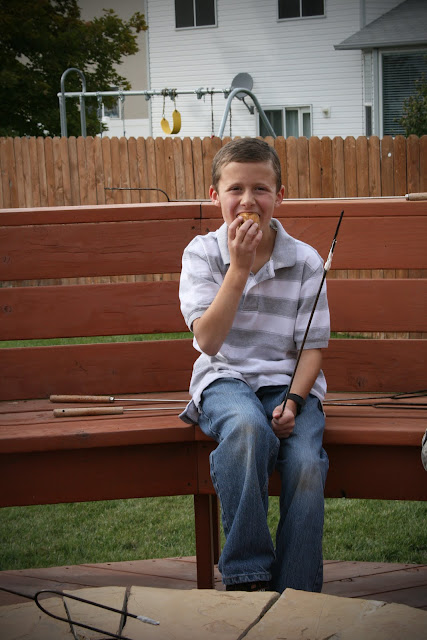 Jennifer always pulls funny faces when I catch her with food in her mouth. I love them. Julie's friend Heather probably wouldn't like this one of her either with a fork hanging in her mouth too. 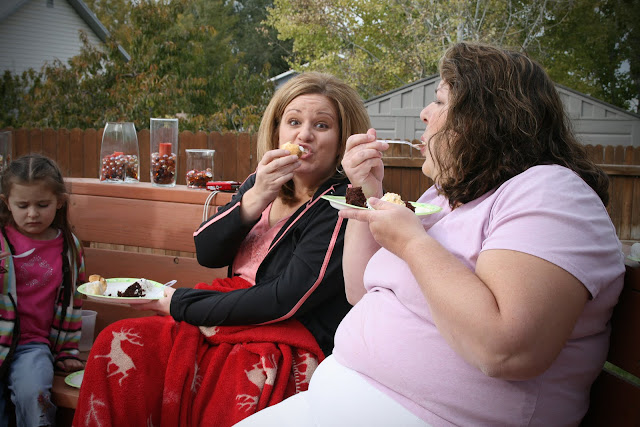 We finished the evening out on the patio around the fire.  The kids all went inside and the adults were outside.  It was fun to just reminisce, get to know Julie's and Brian's friends, and just talk and laugh.  I think we need a built-in fire pit too, along with a pretty deck.  Maybe we'd have people over more often!

Okay, so, last but certainly not least....I was snapping away taking photos of all the goings on today and suddenly little miss Peanut popped in front of the camera.  She is such a poser.  She started pulling all kinds of faces and poses and what not.  I must have taken 50 pictures of her right then.  Here are about 30 of them in a cute little slide show...click on the little icon to the right of the person icon to hear the music and click on the X on the right of the review box to get rid of that annoying box....

It was such a great day.  The only things missing were Kurt and Ang and their kids (they were in San Diego on vacation)...and of course, our mom.  She would have totally loved all the kids playing with each other and all the fun.  She would have sat around the fire and just taken it all in.  I think Melon Man and I need to move to Utah.....

It meant so much to me and my family that you and Clint came for Kolby's ordination. I think you should move to Utah too. Like yesterday. I miss having you around and doing the sister thing. Oh, and stop calling yourself fatty girl, it really pisses me off!!!

That was a fun day! I wish I would have felt a little better, but I loved being with everyone. Aren't we lucky to have such adorable nieces and nephews?