Today is Christmas Eve - my most favorite day of the entire year.  I got up early as I had a list of things that needed to get done.  Although I'm feeling 1000% better than I was a week ago, I still can't go quite as fast as normal so it takes me a little longer to do stuff.  It was kind of cool in the house this morning, so I turned on anything that had Christmas lights in it and then put in my fireplace DVD along with the holiday music on it.  It just set the mood for the day and I actually felt warmer while working.  I didn't turn on the heater because I didn't want to be too warm while working along.  I finished the last step of our Christmas gifts for family and friends and got to work on some other things around the house.  I ironed the tablecloth for the table and got to setting it.  I liked how it finally turned out.  I had received some special Christmas dishes from my two employees and they worked out beautifully on the table.  I interspersed the plates around the table and we used the long platter for the breads and the gold star bowls for the tomatoes and onions. 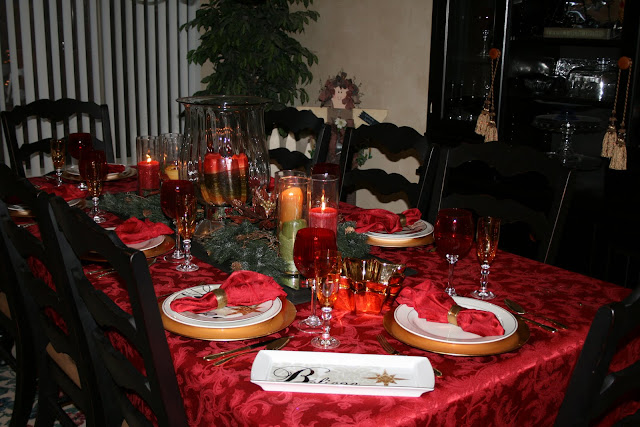 Melon Man finally got up a little while later and he helped with a bunch of the chores.  He left for work about 11:30 and went to do his stint for 4 hours today.  While he was gone, I made the meat and cheese platters, got the chowder going, mopped the wood floors, and got showered.  Oh...and I started in on this....the Martinelli's.  For some reason, it just makes me feel festive!  By the time everyone arrived, I'd already downed half a bottle! 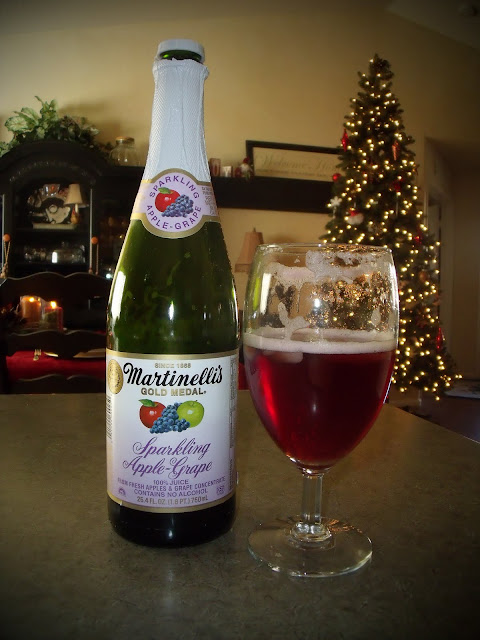 I searched high and low for a special Christmas story to share tonight, but just couldn't find anything I loved.  I always like to do something that reflects Christ in someway but I just couldn't find anything at all this year.  I was bummed.  I spent a good 3 hours searching at least.  Had I not felt like poop for the last 2 months, I probably would have found something weeks ago and would have been able to find a small little remembrance item to go along with it like I usually do, but I just hadn't.  Oh well.  Sometimes our Christmases just don't end up like we want them to.

Our guests arrived around 6:30 and I was just finishing up the chowder.  All the candles were aglow and it was wonderful.  We had a lovely dinner together, visiting and talking.  Soon, our table looked like this....just stuff everywhere with all the rest of the dishes piled on the counters.... 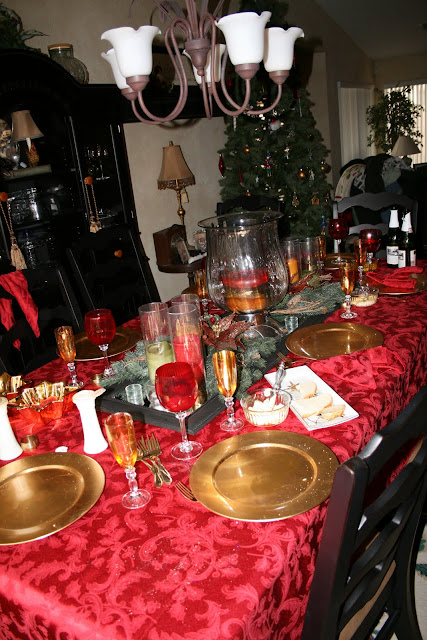 Isn't it funny how we prepare and prepare for a special occasion and in a matter of minutes it's over?  I think about that year after year at Christmas time.  All the decorations, the shopping, the food, the wrapping, the baking (except me), and everything else, and in a matter of minutes, it's a mess or over with?  This is no complaint at all about our evening - it's just a thought that I'm sure so many others feel and share.  To me though, it's all worth it - being together as a family, enjoying a special meal that to all of us is a tradition, honoring the birth of the Savior, and sharing testimonies and stories and songs.

We moved into the living room and began our program.  We first began with a follow-up from last year.  Our story last year was about a couple who had very little money to spend on each other - in fact, they only had $5 each.  The husband had wanted to buy his wife a new coat as hers was worn and ragged, but it was $75 and they did not have the money.  Instead, he went into a drugstore to buy his wife a small novel and a box of chocolates.  It would come to $4.75.  While waiting in line for almost 30 minutes, he noticed a situation at the checkout where an old man was trying to pay for insulin for his wife.  The price had recently gone up $4 and he didn't have the extra money.  Other people behind the old man were getting impatient with him and saying mean things or rolling their eyes.  The husband from the story stepped out of line and handed the old man his $5 and said "Merry Christmas" to him.  As the husband arrived home, he noticed an envelope stuck in his door.  On the front it said, "Matthew 25:40".  He went into his home and opened the envelope.  Inside was a $100 bill.  He went and bought the coat for his wife.  After arriving home again, he looked up the scripture to see what is was.  It read, "Inasmuch as ye have done it unto one of the least of these my brethren, ye have done it unto me."  I had created similar white envelopes last year and filled them with a copy of the story, along with a $10 bill for each person.  The instructions were that they were to use the $10 bill this year to somehow help someone else in need during the Christmas season.  Each person shared their experiences.  Melon Man and I chose to send gift subscriptions to the Ensign to a person on our visiting and home teaching routes that we have had a hard time getting in to visit.  Hopefully having this small measure of Christ's influence in their homes will help them feel of His spirit and will help them have a desire to come back to church again.

Next, we played the Wright family Christmas game that Lisa and Craig brought, which is always fun.  Melon Man won some glow in the dark Silly Putty. 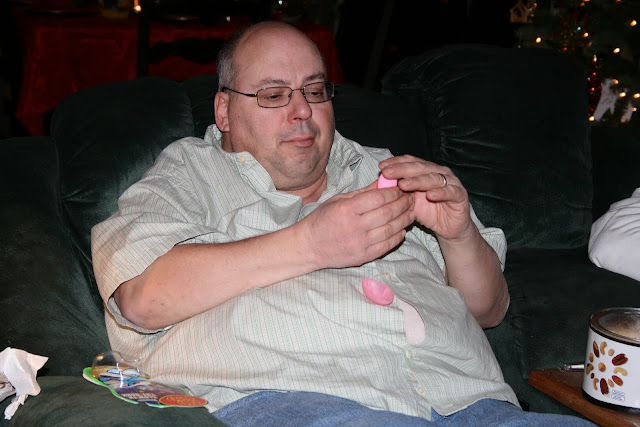 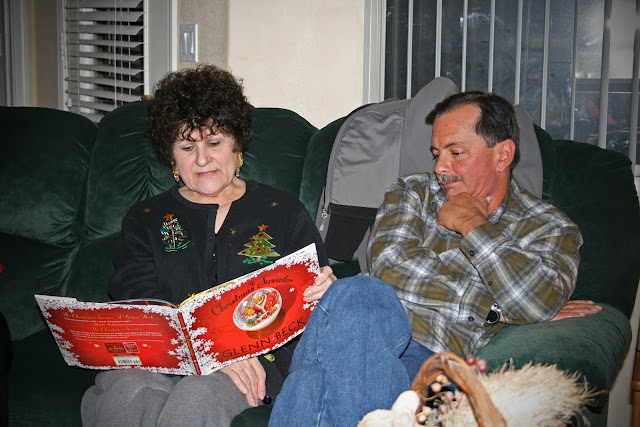 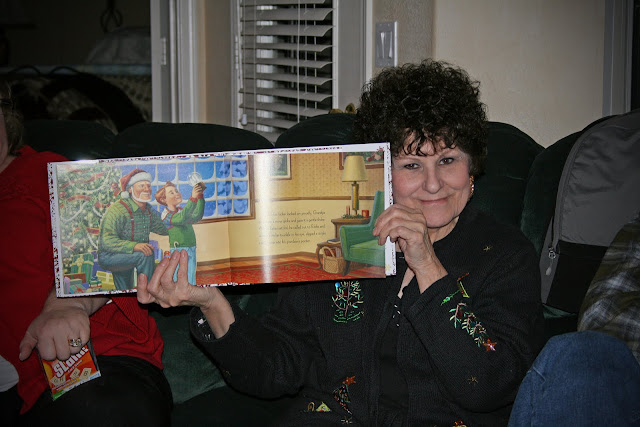 Uncle Ward led us in singing the 12 Days of Christmas and another rip happened in the old song poster.  Curtis then read the story of Christ's birth from the Bible for us.  We sang Silent Night and the I finished up the program by sharing some thoughts about the movie "The Nativity Story".  Had it not been so late, we would have watched the movie since none of our guests had seen it.  We planned to take it to Lisa's tomorrow to watch it then instead.  Auntie Sigie and Uncle Ward gave us some new spatulas and a pie server.  Lisa brought toys for the dogs and Dog LOVED his new squeeky baby!  It went from soft and plush to sticky, wet, and stringy in a matter of minutes!  Yucky! 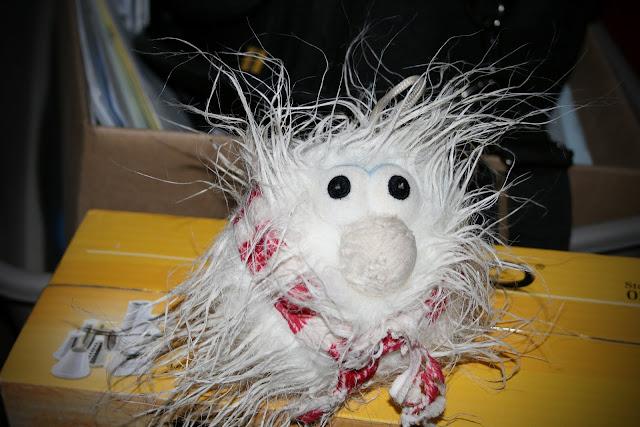 Melon Man and I left all the dishes where they were and just sat down to watch tv together.  Usually, he and I would open gifts from one another, but we had no gifts to give each other this year.  It was a decision we had made earlier when we determined that there really wasn't anything that either of us wanted or needed.  I had opened Jennifer's gift earlier in the day and put it on my shelf with my Santa fairies. 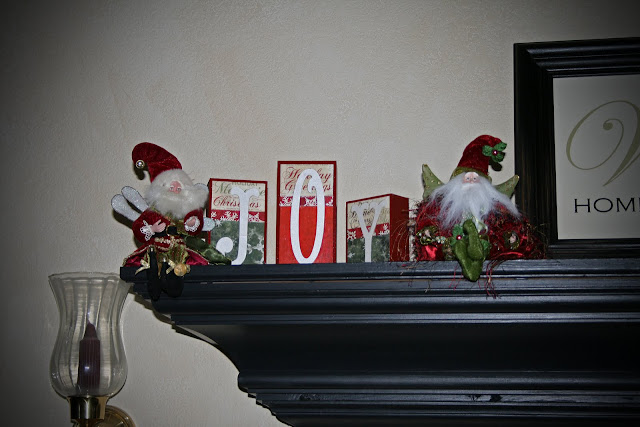 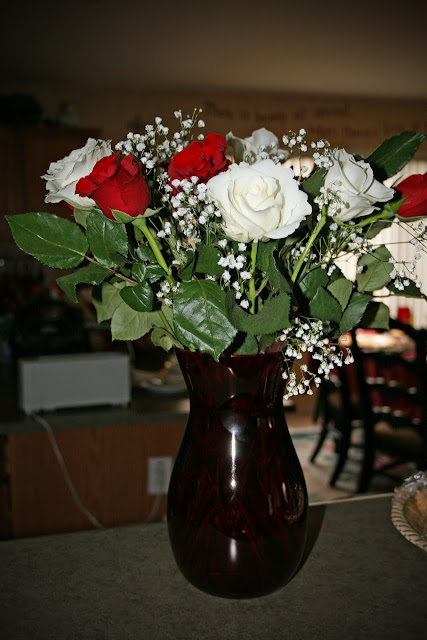 Kurt and Ang sent us a lovely floral arrangement that arrived around 2 pm.  Kevin and Jodi gave us a gift card to Chompies - yum!  Julie and Brian gave us the gift of Brian's talent when he built my shelf for me when they were here at Thanksgiving. 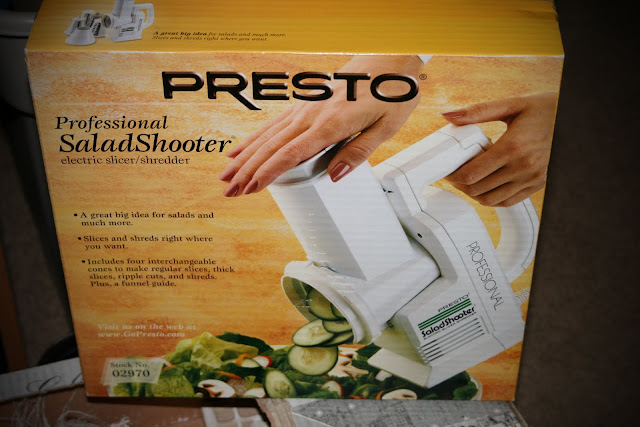 Dad gave us a salad shooter - which I was excited about because I missed having one since my first one had broken years ago and had finally died.  He'd also sent some of his zucchini bread that he'd made.  I felt bad because we had not gotten our gifts shipped off to Utah in time for them to arrive for Christmas, but I hoped that everyone would understand.  We finally went to bed about 10:00 or so.  It was the earliest I've gone to bed on Christmas Eve in a long time, but it felt nice to do so.