Last Friday was our ward Christmas party.  Melon Man got to help out as Santa since Santa himself couldn't be there because he was busy at the North Pole.

I had read about an idea for a ward Christmas party on another blog that I frequent last year just after we had done our simple Savior only Christmas party.  It was for a Whoville Christmas party based on the Dr. Seuss version of How the Grinch Stole Christmas.  I made the suggestion to our ward activities leader and we tossed it back and forth all year but never made any firm commitments toward it until 3 weeks before the party when we decided we needed to get something together.  With the way I have been feeling lately, the ward Christmas party certainly was not at the top of my list, but I tried to help as much as I could in the planning and execution of it.

We decided to go with very minimal decor since in the story the Grinch steals all of the Whos' decorations.  So, we strung 3 long single strands of lights across the cultural hall.  We bought a few red and green chinese lanterns to mimic the look of ornaments.  We just used simple white tablecloths with red and green plastic tablecloths on the top.  That was it for the decor.  We could have done a lot more, but this worked out just fine considering our limited time, committee, and illness that both the leader and I had been going through. 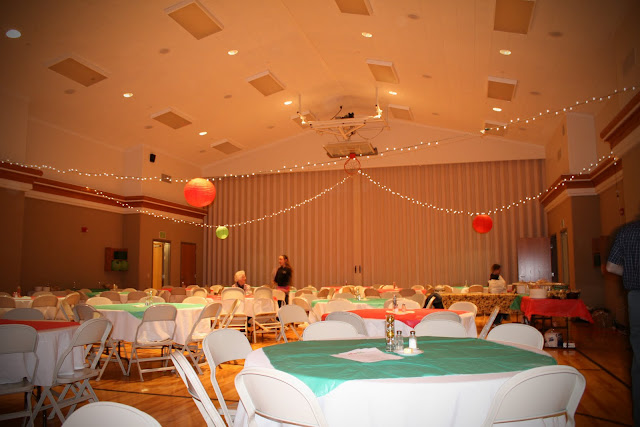 We had had a little conflict of opinion on who our special guest of the night would be.  I felt strongly that it should be the Grinch since it was a Whoville Christmas party.  The ACL felt we needed Santa because the kids would be afraid of the Grinch.  I couldn't quite understand why...until 3 days before the party and I was driving home from work and had an impression in my mind that she and I were thinking of two different Grinches - mine from Dr. Seuss and hers from the Jim Carrey version of the Grinch movie.  Okay, if we did that version, I would definitely be scared too!  Once we talked about it, I suggested that we do both - the good Grinch and Santa.  Melon Man agreed to be the Grinch.  But...something still wasn't feeling right and we still didn't have a Santa or Santa Suit.  The ACL called me a little later and suggested her brother to portray the Grinch and Melon Man to play Santa.  I knew Melon Man would be a little sad, but he agreed and Kenny, the ACL's brother agreed to play the Grinch too.  The ACL found a Santa Suit, it fit Melon Man, we discussed Kenny's makeup, and the night before the party, I was writing a script to incorporate both the Grinch and the Savior, along with Santa.  Talk about pressure.  Oh...and I hit up the bishop's wife at the last minute to play the piano for part of our skit.  I think it turned out pretty well....

The night started off with the Grinch telling us why he stole all our party decorations and food. Once we sang some Christmas hymns about the Savior, his heart swelled up two sizes and he was happy to give us back our roast beast for dinner.  He did a fantastic job and the acting and accent were perfect! 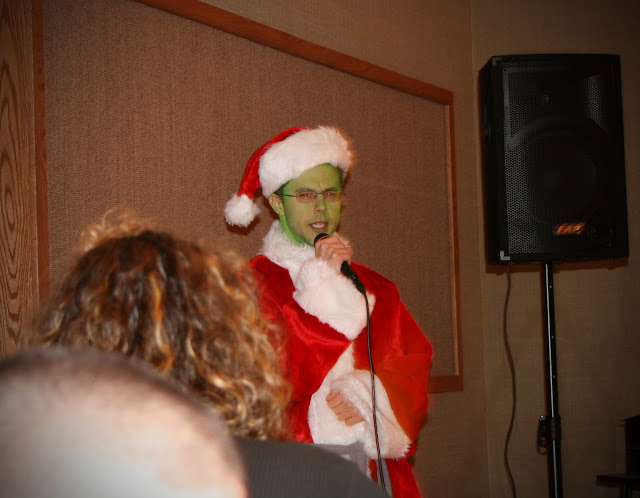 EVERY Who down in Who-ville likes Christmas A LOT.
But, I, the Grinch, certainly DO NOT!
I HATE Christmas! The whole Christmas season!
Please don’t ask why – I don’t know the reason.

It could be that my head isn’t screwed on quite right.
It could be, perhaps, that my shoes are TOO tight.
But I think that the most likely reason of all
Is that my heart is two sizes TOO SMALL!

So I came down to Who-ville and stole all your stuff
Of the Christmas season, I’d had quite ENOUGH.
All your presents are gone, all the trees & wreaths too
No more stockings filled with candy, no more nuts in your shoes.

I took all the food for your dinner divine
I took EVERY morsel and it is ALL MINE
Who-pudding, roast beast, every can of Who-hash
I took everything from the first to the last.

But WAIT! What’s that I hear?
Music a-far or music a-near?

WELL! Isn’t that special? Music so soft…
You sounded like a choir, up in a loft.
What’s that song of, a small town at night?
Or did I hear something of everlasting Light?

What is this Light of which you sing?
Is it something you borrow, buy, or bring?
I want to know more, your song made me smile
I feel my heart swelling, it’s been quite a while.

Sing me another, I want to hear more
I think that I like it, you’ve opened a door.

CONGREGATION SINGS FIRST VERSE OF AWAY IN A MANGER

Oh my heck! Don’t you say!
Christ was born on this special day!
I’d forgotten in all of my greed
That the true reason for Christmas is one we all need!

We don’t need TVs, iPods, Blu-Rays, and Wiis
We need Christ in our lives, it’s easy to see.
Economy good or economy bad,
The loss of Christmas focus has made our Lord sad.

My heart is so full, it’s about to burst
I’ll give you back your roast beast here in the church!
Don’t forget the true reason for this special night
It’s God’s loving son, the everlasting Light.

So join me in singing just one small song more
Then you can eat until you are sore.
Be sure not to leave too early in flight
I’ve invited a friend for the end of the night!

After the blessing, we had lots of turkey, stuffing, green bean casserole, corn, potatoes and gravy, and salads. The Grinch mingled with the kids and soon we spied the guy in the big red suit sneaking in! 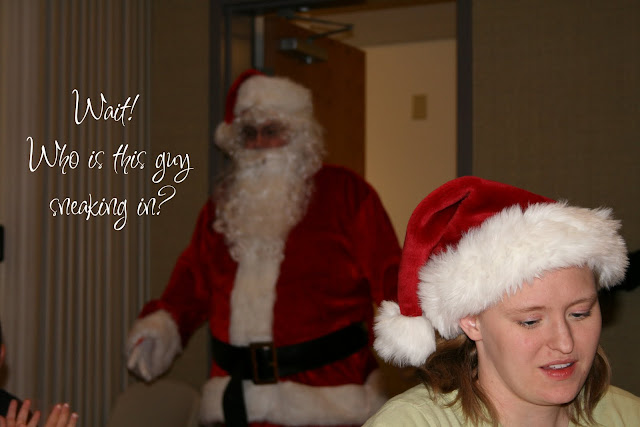 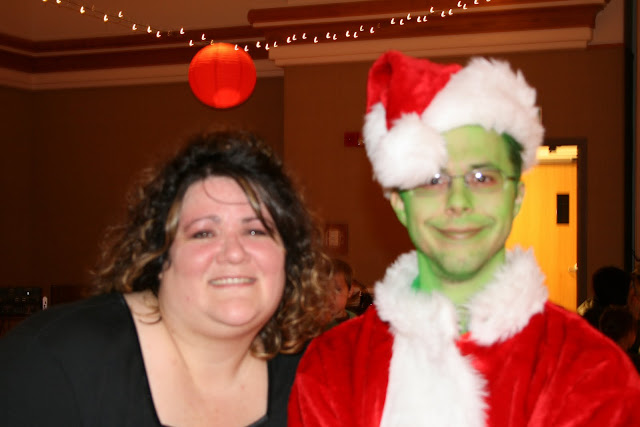 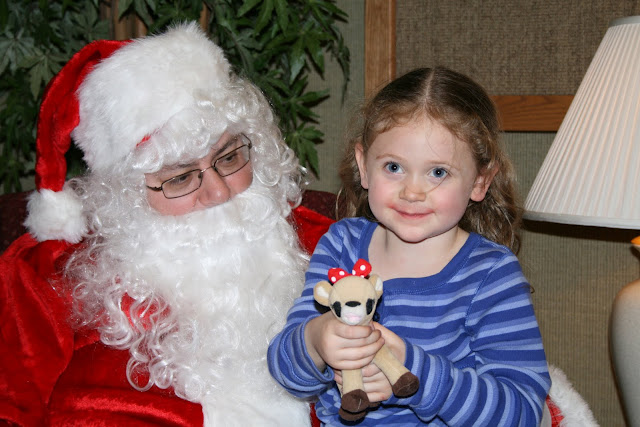 "Santa" did a great job.  This little girl above was so cute.  She brought her little reindeer to show him.  She had no fear at all about getting on his lap and talking to him.  One of the best interactions though was this girl below.  He asked her what her name is and when she told him her last name, he told her how he remembered visiting her mom, Sammy Jo, when she was young.  Now, the great part about that story is that only Santa would know a story like that because not many people know Sammy Jo as Sammy Jo!  Even I didn't until "Santa" told me a few years back when he saw her at church the first time. 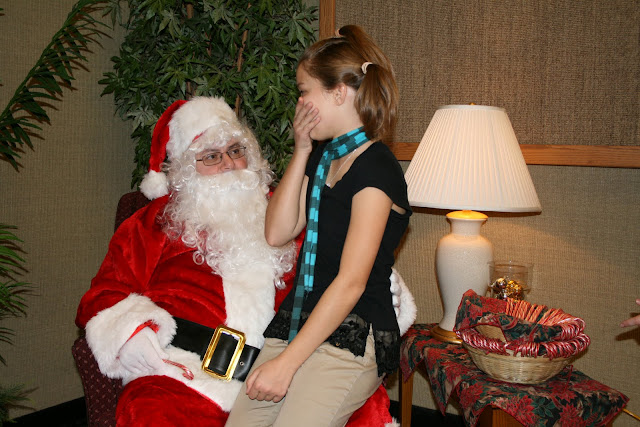 Melon Man was really good with the kids.  I told him we needed to do this as a side job every year.  We could make a lot of money!  He wasn't too keen to doing it though...bummer.  I thought he'd be great and it could help pay for Christmas each year!  Oh well.

I took pictures of all the kids with Santa.  What a long line!  By the time this part was over, a lot of the party had been cleaned up.  I wasn't feeling too great at all (in fact, I literally almost dropped to the ground once) so I excused myself and apologized to the ACL for not being able to finish help clean up and headed home.

Overall, I think everything turned out just fine and dandy.  Sure, we could have done more, but there really wasn't enough room for more so it was all good.  And...the Grinch and Santa thing worked out just fine.... 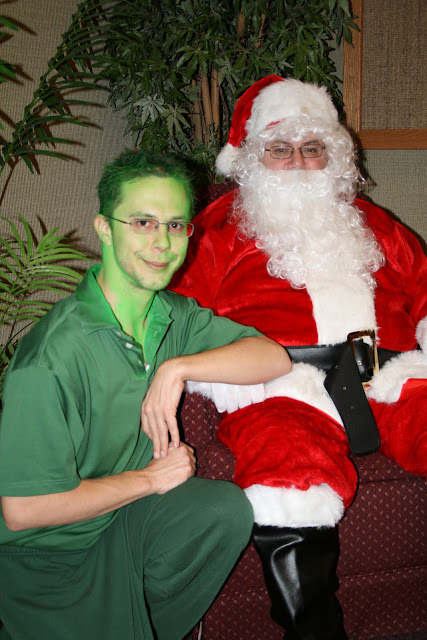 Kristin, you did an amazing job writing that! I think that your entire theme and ideas for the party sound so neat and unique and I'm sure your ward loved it. You are so talented!

Love your script! I think we're gonna 'borrow' that! :)