When I got home from work last night, it was still raining - and hard.  It was cold and the perfect weather for soup.  I had been craving Olive Garden's Zuppa Toscana soup and I had the ingredients to make it.  However, Melon Man detests soup.  He is a midwesterner still - a meat and potatoes man through and through.  Soup, yeah, that's for woosies.  So, I decided to put a chuck roast in the oven for him and I made me some Zuppa Toscana.  This is the recipe:

Saute the Italian sausage and crushed red pepper in pot.  Drain any fat remaining.  Refrigerate while you prepare the other ingredients.  In the same pot, saute bacon, onions, and garlic until the onions are soft and the bacon is cooked.  Pour in chicken broth.  Bring to a boil.  Add potatoes and salt. and cook until soft - approximately 15-30 minutes, depending on thickness of potato slices.  Add heavy cream and cook until thoroughly heated.  Stir in sausage and kale.  Cook for 3-5 more minutes.  Serve with crusty bread or garlic breadsticks.

Melon Man got home before his roast was done so he had to wait a little longer.  I had a bowl of soup while we waited for his roast and then another when his roast was ready.  Cooked up some boiled potatoes to go along with his meat and some green beans and made some yummy gravy for him too.

Tonight is date night though, so we decided to try the new 5 and Diner Deluxe that recently opened.  It was just okay.  Too expensive though for a hamburger and fries - $8.29 plus tax plus tip and it wasn't even all that good.  Probably won't go there again.

These are some pictures of what the recent weather has done...these first two pictures were taken while I was driving home yesterday when it was raining.  Because we don't get a lot of rain here very often, the ground gets REALLY hard.  When we have our monsoon seasons (one in the summer and one in the winter), there is a lot of water that comes all at once and the ground can't soak it in fast enough so it just floods.  The roads here are built on an angle so the water will flow to the outside and then head toward drainage systems either underground or such as this one in the picture below.  Melon Man and I call it the moat around Sun City West.  It's normally dry, but had about 2 feet of water in it at this point - flowing pretty quickly to the wash under the Surprise bridge about a half-mile east of this spot. 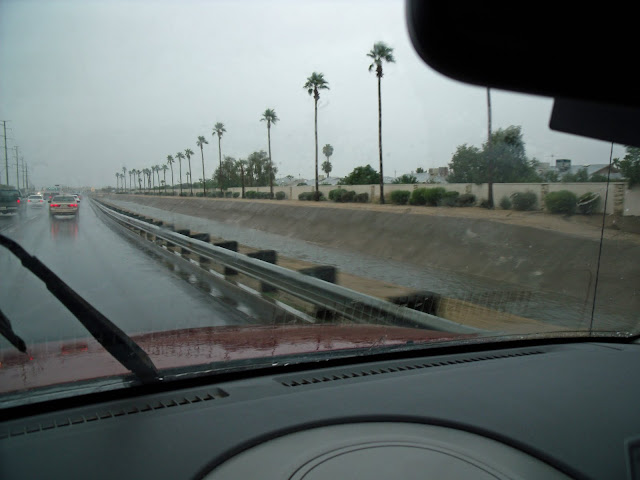 This is how the right lane gets sometimes on Bell Road...flooded.  Most of the time, cars have to avoid that lane - that is, unless you're one of the senior folks headed into this retirement community.  Since I drive a big truck, I often want to drive in the right lane just so I can splash the rain up on someone else, but I know that's not nice or safe, so I don't.  (And yes, I took these pictures WHILE I was driving - I know, bad.) 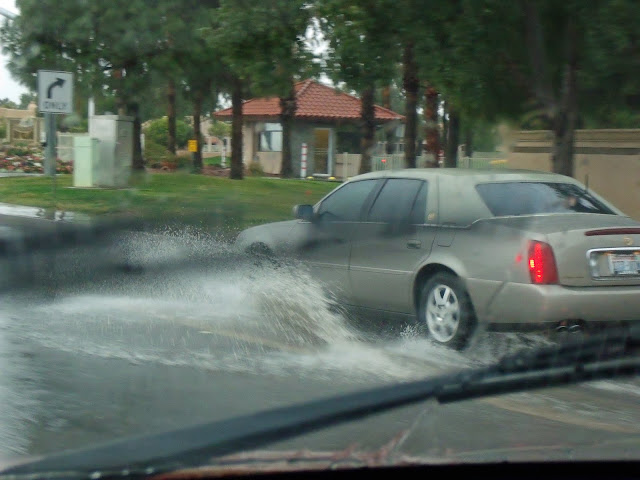 The remainder of these pictures are of the "parks" in our neighborhood which are actually water retention basins built into parks with grass and all to hold the run-off when we have storms like this.  The water is about 3 feet deep here.  As I was coming down the street to take this picture, I saw 4 girls getting into a car, sopping wet.  They'd been out playing in the water.  Looked like fun, but that water is NASTY.  It's got all the oil and dirt in it that's been on the roads since the last rain storm which was like 6 months ago, plus any other gross organism which may have been on the streets like dog feces or urine or trash juice, or whatever.  Yuck.  Even still, it did look like fun, but again, yuck. 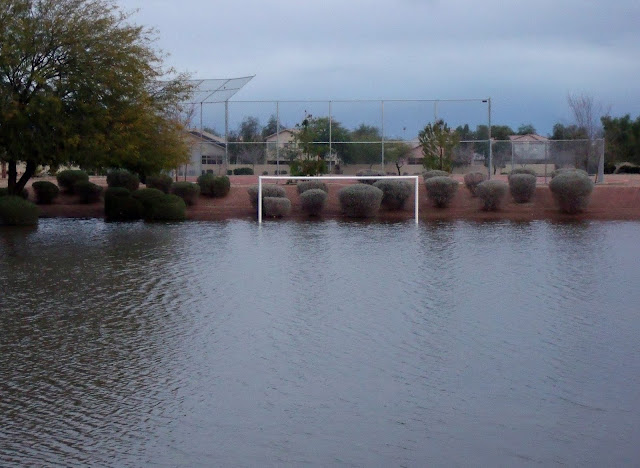 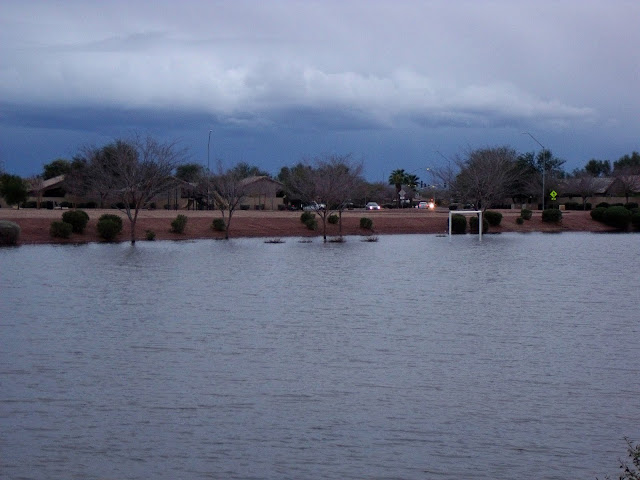 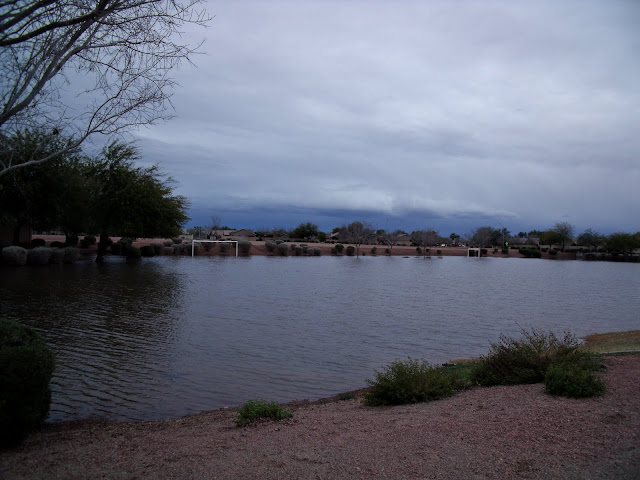 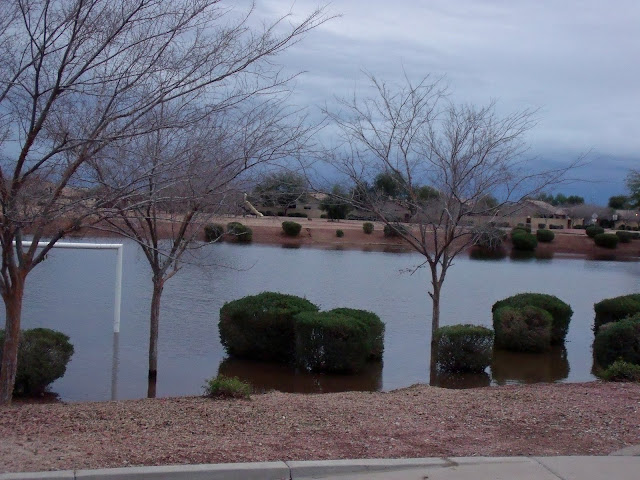 This is a more shallow end of the park.  The water was about 18 inches deep here. 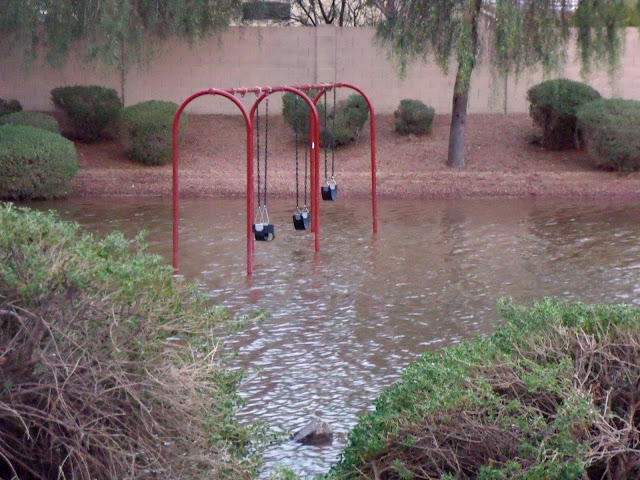 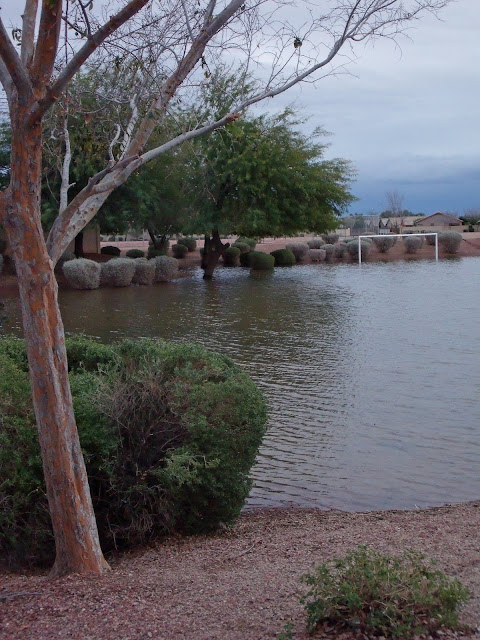 As I was driving home, I also noticed the sun trying to peek out from behind the clouds, just over the mountains.  At one point, and I wish I'd been able to capture this, but I was driving you know, it looked like the top of the mountain was actually on fire with the light of God!  You know the scene from The Ten Commandments movie...where Moses heads up the mountain and the people are looking at the mountain wondering when he's going to come back and the top of the mountain is all aglow...yep, that's what it looked like.  But, by the time I could actually slow down and sort of pull over to take a picture, the angle was different and the clouds and sun had shifted enough that it just didn't look the same anymore.  Oh well, this picture is still pretty. 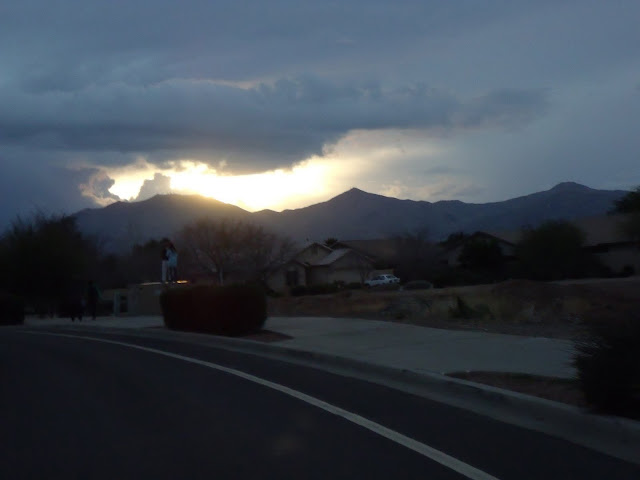 So, they say our rain is over for a week now or so.  But, it did rain again later in the evening around 9 p.m.  I think I do need a little bit of sunshine tomorrow, but I'll take the rain if we get it again too.  It's so infrequent around here that I love every moment of it.

GReat pictures! It was a storm that is for sure! There is lots of standing water every where!

Looks like around here. I love your pictures (even if you were driving!) I should have been better at picture taking. It was a pretty intense week for us. Those parks are CRAZY that full of water!!!

ps: I like how you put pictures on the side in those frames. Very nice.