We slept in today and took our time getting packed up and ready to go.  Finally, though we decided that we'd better get going or the valet line would be really long with all the other people who were checking out today.  Plus, we still had to head back to the pawn shop and pick up my ring from it being sized.

We checked out on the TV and left our room.  The valet only took a few minutes and soon we were on our way up the strip to the pawn shop.  We soon found a parking spot and headed in.  It was filming day again!  But, we didn't see any of the 'stars' this time.  We found out they were in the back doing the filming.  I went to get my ring while Melon Man perused the store 3 times.  We then found out my ring hadn't even been done yet.  I wasn't too happy.  They said it would be about 15 minutes.  Okay, I could handle that.  But, 45 minutes later, we were still there.  Melon Man finally headed out to the truck.


Soon, "the Old Man" came in the store and headed to the back.  My ring was finally done and I headed out to the truck.  Melon Man showed me a brand new black 2010 Bentley parked right in the first stall next to the store.  He said, "Know whose that is?"  I said, "No.  Whose is it?"  "The Old Man's.  I just saw him get out of it," Melon Man replied.  Wow.  I guess the store and the show are doing pretty well. 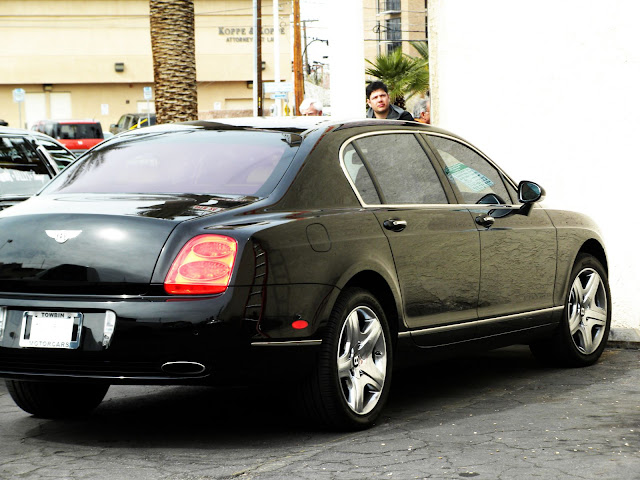 I showed Melon Man my ring and we both thought it was pretty. 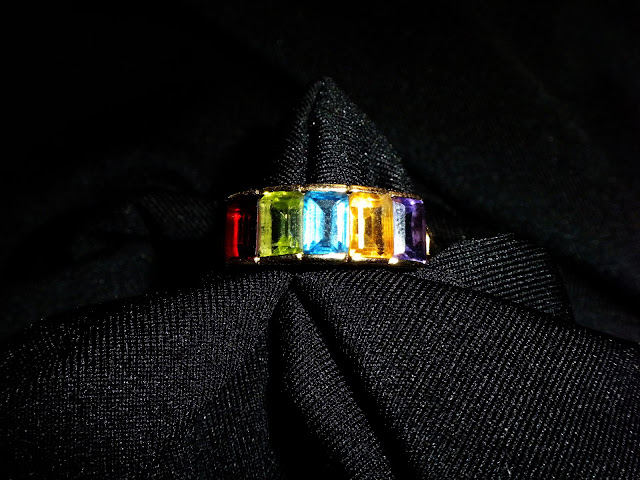 We soon headed on our way out of town.  As we were leaving town, we looked back in the mirrors and started to talk about our little trip to "Sin City."  We both commented on how it truly is "Sin City."  We were both amazed by the sin that goes on there.  The nasty, filthy, pornographic atmosphere.  The drinking.  The amount of smoking everywhere.  The flow of money.  The city felt evil and dirty.  We were so glad to be leaving it.  We soon reached Henderson, where Maria lives.  Had it not been a work day for her, we would have stopped in and visited.  We could definitely feel a difference as we cruised on through on the freeway.  This felt more real, less dark, more like a regular city.  After that, Boulder City, where we stopped for some food.  We quickly continued on and we were both quiet.  One of us finally spoke up and we both had the same thing on our mind - the sin of Las Vegas.  It was really bothering us both.  There is a well-known phrase of "What happens in Vegas, stays in Vegas."  As I look around what is happening in the world these days, would I really want to have that as my mantra?  No.  We both agreed, that unless we needed to go through Vegas to get somewhere or unless we were going to just go see Maria and Jason, we would not be going back to Vegas again for a vacation.  We almost felt ashamed that we had gone there instead of somewhere else.  But, we realized, as well, that we needed to see that the influence of Satan is increasing more and more in our world.  We needed that experience to draw us closer to the Lord and His righteousness.  With all the earthquakes and natural distasters in our world these days, we both feel the time of the Lord's coming is drawing closer and closer and as parts of our world begain to disintegrate into deep sin and despair, we need to run as fast as we can in the opposite direction.
We soon got closer and closer to the Hoover Dam area again.  This time, I was on the right side of the vehicle to be able to get better pictures.  Oh.  My.  Goodness.  I.  Am.  Going.  To.  Vomit.  (Cindy - YOU will NEVER be able to do this bridge.  The 10 and the 91 - a piece of cake compared to this.)  This is one stretch of the new road that has been built over higher ground that leads to the new bridge. 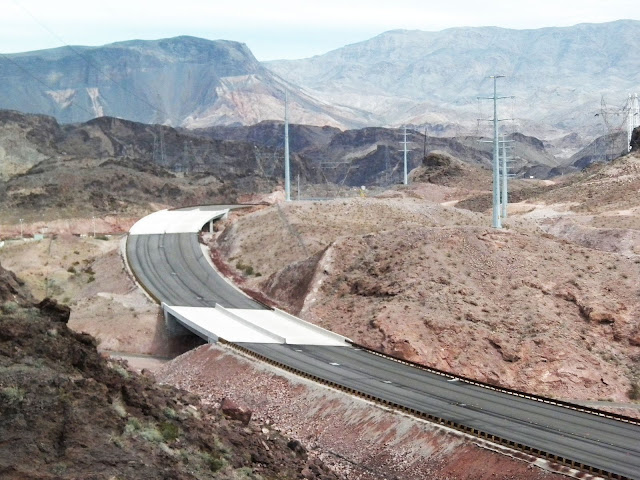 And, of course, there is security on both sides of the dam - both the Nevada side and the Arizona side.  Yep, the back of our truck bed was empty...again. 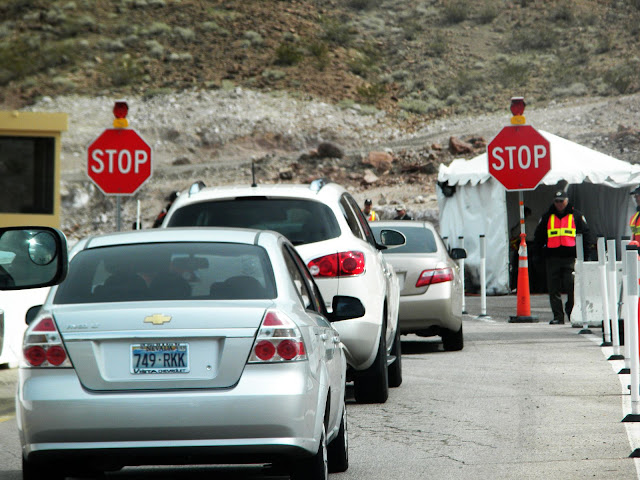 A sign actually telling us we're getting close to the dam.  Ok. 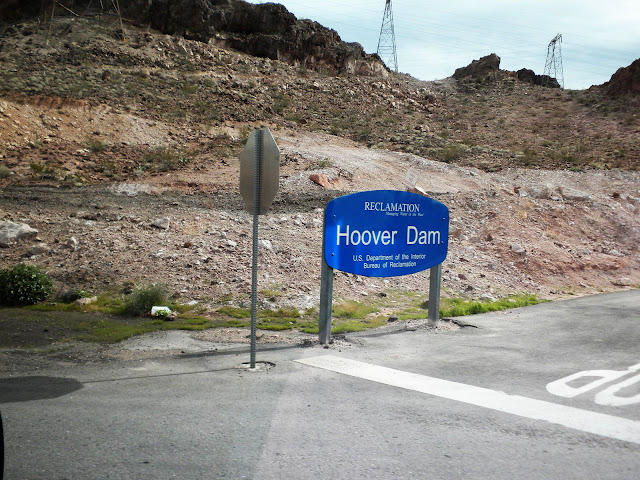 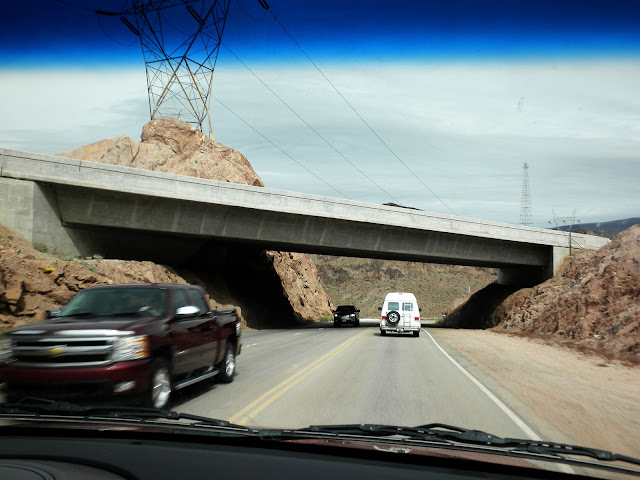 These tall things hold up pieces of the bridge so as the concrete of the bridge dries and cures, there is less stress and strain on it.  Amazing.  These were actually dreamed up by one of the workers or such. 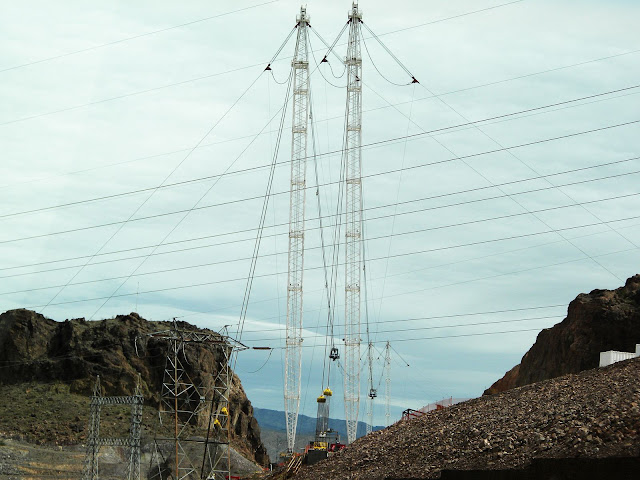 This little house of machinery has been here at the dam for as long as I can remember.  I'm not sure what its purpose is, but I think it's pretty neat to look at versus all the new fangled stuff. 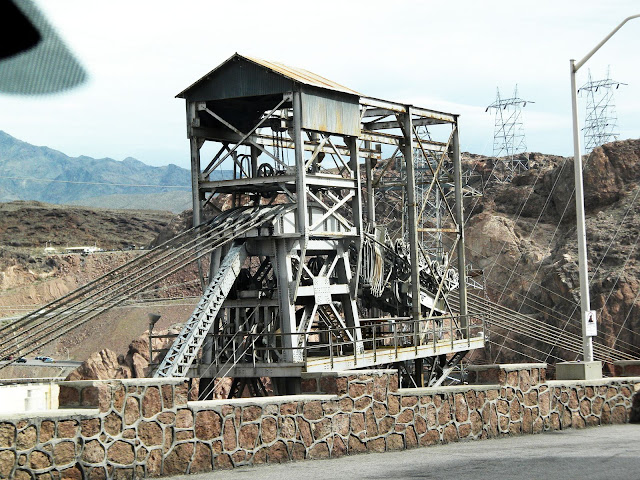 Okay, seriously, this is scary.  Look at how high that bridge is versus the little cars below it!  And, now think about how far down below the bottom of the canyon actually is.  Vomit-city. 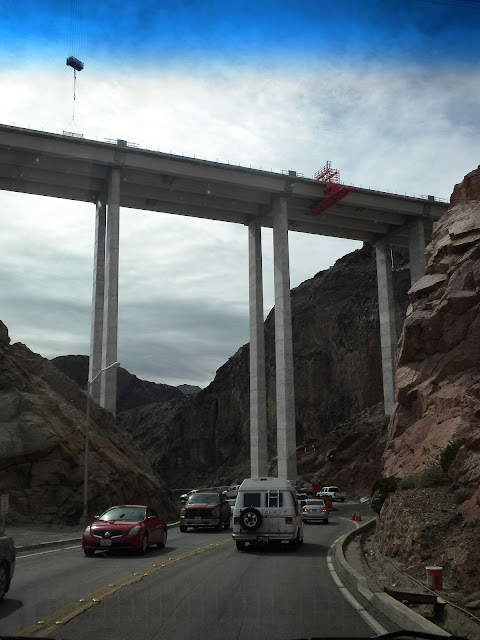 This is how the bridge pillars are built into the side of the hills.  I'm still not sold on its stability! 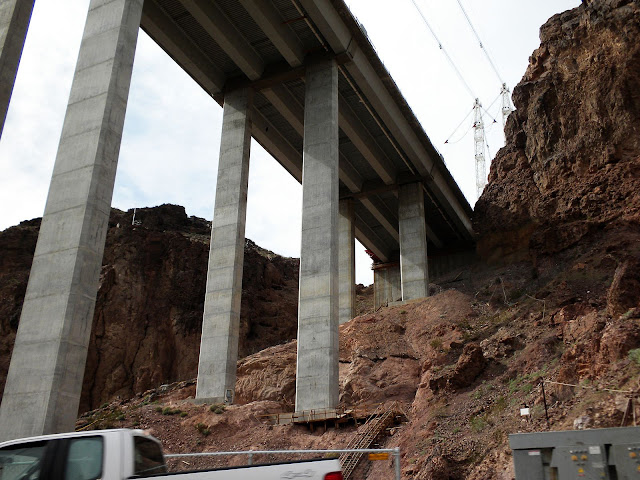 Almost all of the bridge cross-pieces are in place.  I will have to be knocked out to go across this bridge.  I'm just not going to be able to do it! 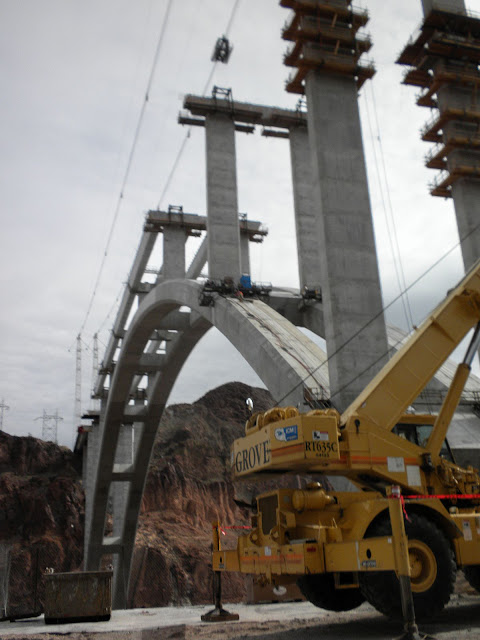 I know all about engineering and the strength of the arc and such....but.... 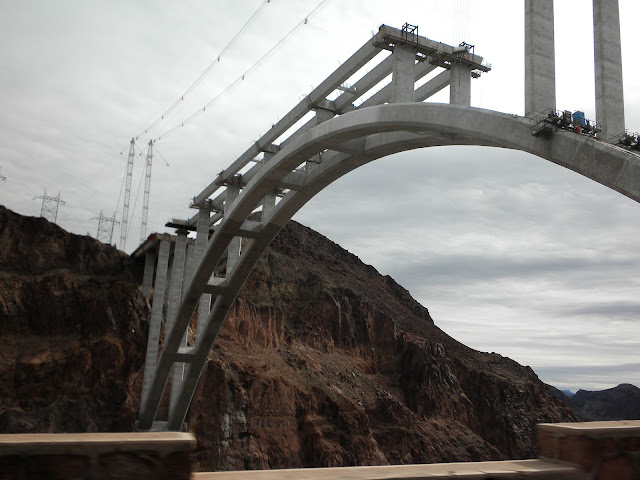 I guess the good thing about this new bridge is that we won't have to drive down that long winding road anymore - but I still think I'd rather do that than go across this new bridge! 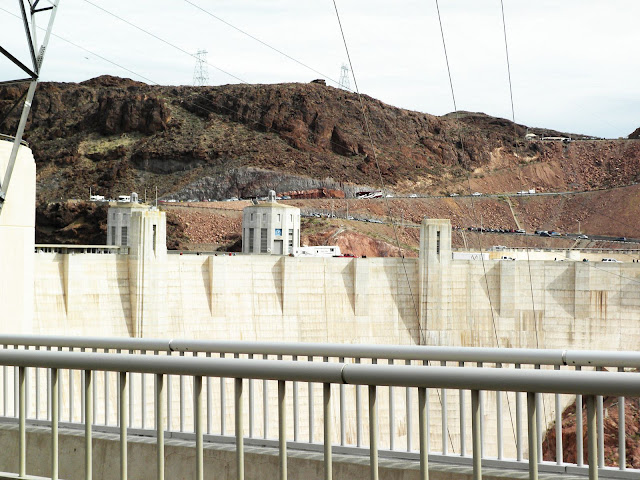 A long distance shot of the new bridge. 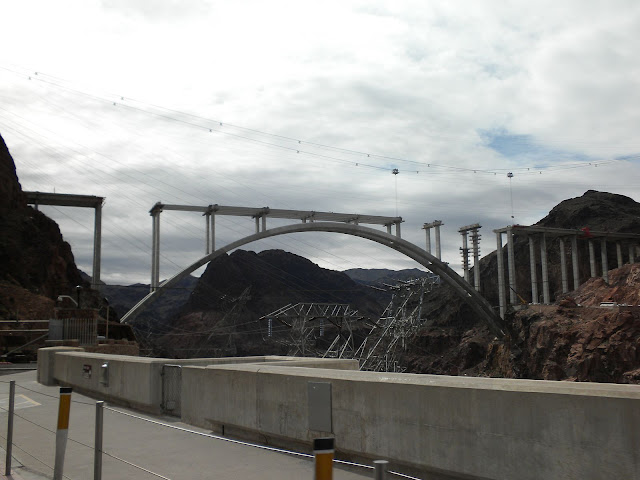 This next picture is an artist's rendering of what the final bridge will look like.  Pretty, yeah, but I still don't trust it nor do I want to drive on it.  That is REALLY high up. 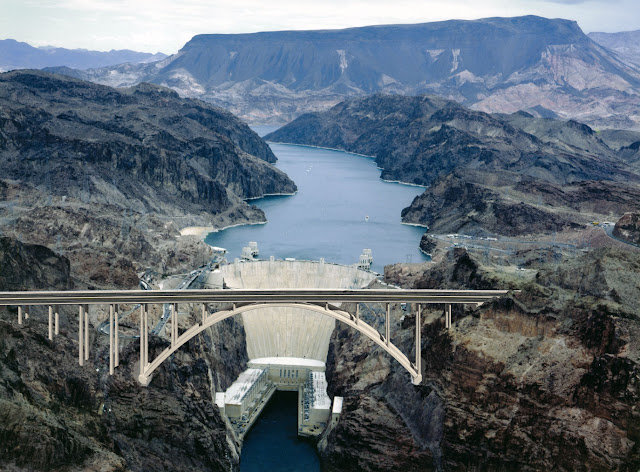 Duh.  Where would you park anyway?  There's really nowhere to park, other than in the specially designated parking lots! 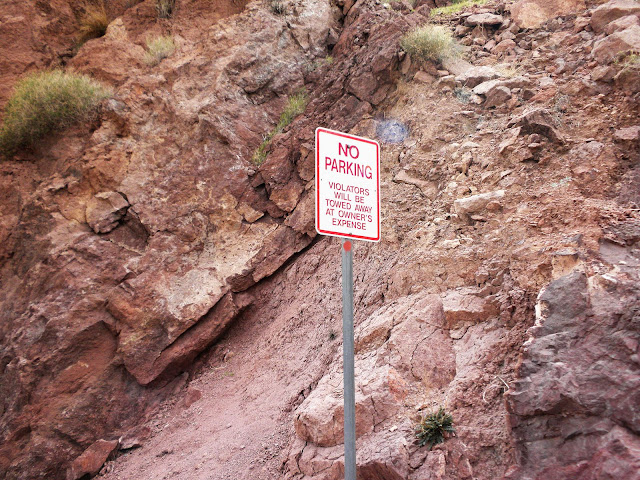 I hate trying to take pictures while we're driving.  I always somehow miss the picture because I zoom in too much right before I take the picture.  This picture is no different.  Welcome to Arizona! 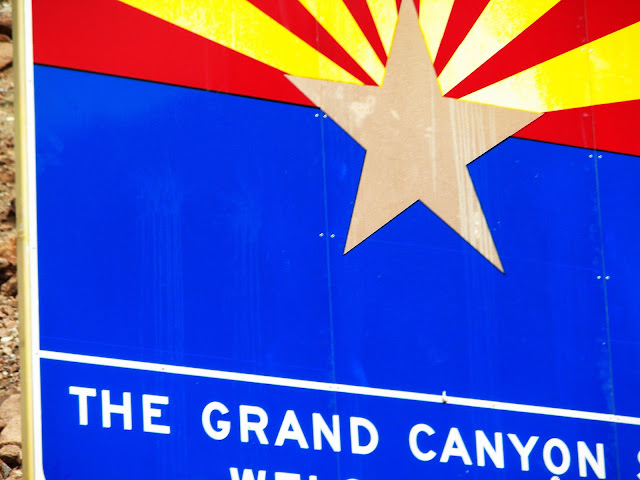 Too bad I couldn't get a better angle on this one - you could see just how low the lake is.  The lake is down over 100 feet, I found out.  It's that way because of the construction.  I'm not sure why though.  It doesn't make sense to me to let water out of a lake/dam if you're building a bridge way up high and away from it.  But, I guess there must be a reason! 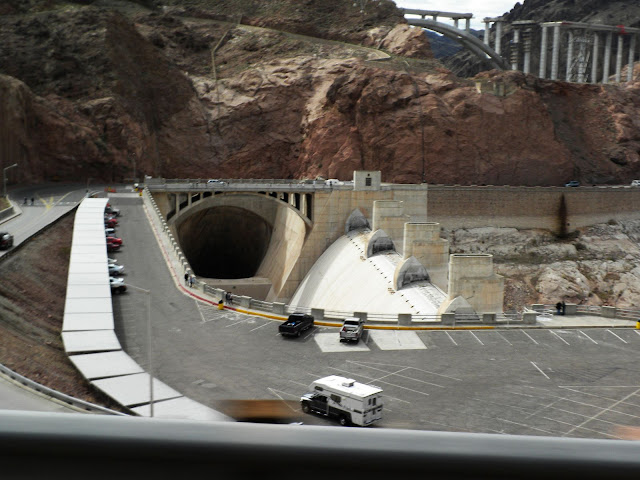 I was so glad to be past that part and on our way.  We Melon Man drove and drove and I slept and slept.  i don't even remember when I woke up - but it was well past Wikieup, that's for sure.  In fact, I don't recall going through Wikieup on either part of this trip!  Soon, we were arriving at the Petshotel to pick up Dog.  We stood in the foyer waiting for him and then moved over to the window to look in at the kennel area.  We could see his leash down the aisle on one of the doors.  The lady soon opened the door and out he came. 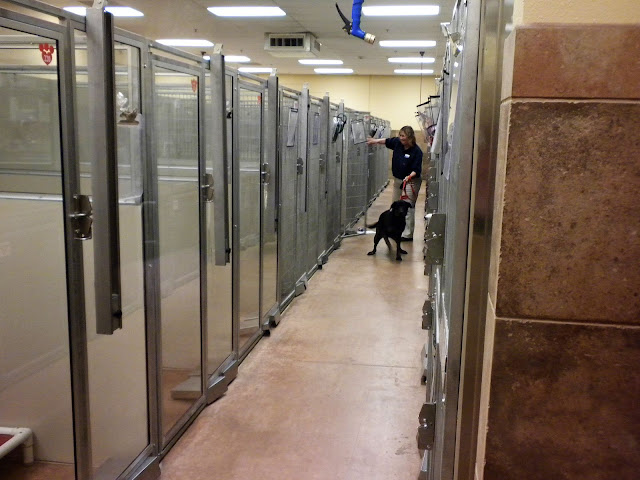 He didn't notice us at first, but then, I shrieked out "Dog!" and he looked up and took off running.  He almost pulled the lady's arm out of the socket and yanked her to the ground!  I mean, seriously, look at that expression on her face!!! 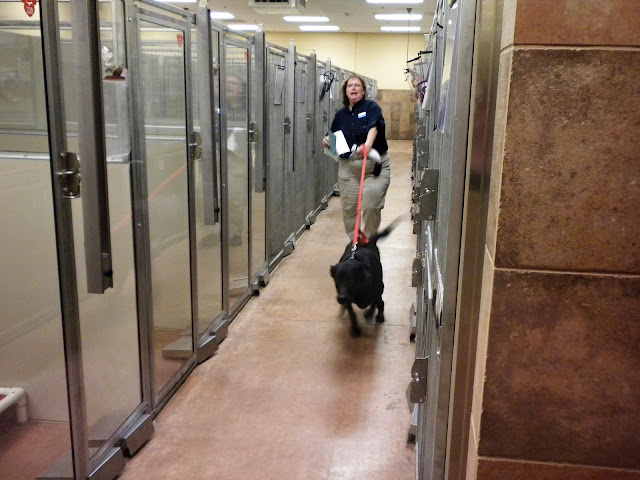 He leapt up at the window and was so excited to see us.  He could barely wait to get out of there!  Oh man, do I love this dog or what?!?!  He is just so sweet and cute!  He quickly yanked us out of the store and we got him in the truck and headed home.

As we came around the corner and onto our street, we both commented that it felt peaceful and like home.  The dirty, evil feeling of Vegas was gone.  (I later talked with Shelli about living in Vegas.  She feels the same about "Vegas" as we do - but she told us that living in Henderson really does feel far away from the evil and sin of downtown.  I was a little afraid I might hurt her feelings blogging about the feelings we had, but she completely understood what we felt and was fine with what I wanted to write.)  We lounged a little, then we all went to bed around 9.  Oh, the feeling of your own bed and pillows.....

This is a really good post. All the dialogue and pictures. You are totally right--NO BRIDGE LIKE THAT FOR ME. I'd have to be knocked out first.