I am FINALLY home.  Really, I guess it was truly only 8 states, but when you fly over them twice, I think it should count as double.

This is what Chicago looked like as I drove to the airport this morning.  Yeah, I know...bad...shouldn't be taking pictures while driving.  But...have you ever seen Chicago freeways so empty during the daytime?  Me either.  It's Saturday. 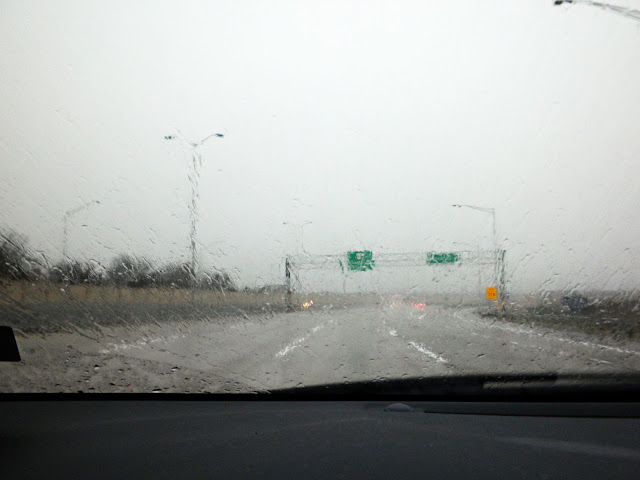 I arrived at the rental car return and dropped off the vehicle.  Jumped on the shuttle to the terminal and headed on in.  Bought a bagel for breakfast since I HAD overslept, just like I knew I would and missed breakfast before I left.  It wasn't too long until they started boarding our plane.  Yep, you guessed it...I fell asleep before even backing out of the gate!  It was so rainy and cloudy that I couldn't have seen anything down below anyway if I had stayed awake so I figured why not get some much needed rest?

I woke up about 10 minutes before landing in Dallas.  This is what I saw as we were circling the city prepping to land...yeah, I think we were under the no battery-powered-anything with an on-off switch rule, but seriously, it's just a camera.  I took a quick pic.  I hadn't been able to see any of Dallas when I flew in last Sunday, so it was amazing to me just how big the place is! 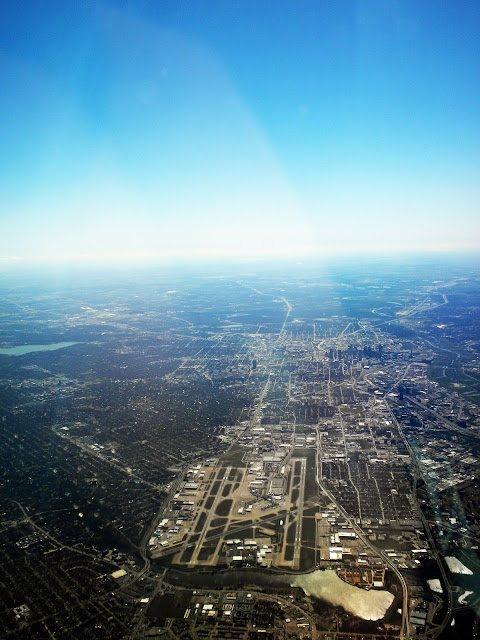 We soon landed and unfortunately I had missed the announcement about connecting flights and such while I was sleeping.  So, I got off the plane, found a monitor, and quickly learned that my next flight was leaving out of another terminal.  What?!?!?!  I had no idea where that terminal was, where to go, what to do, etc.  Okay, breathe.  Go to the tinkletorium first.  You have three and a half hours until it leaves.  You'll be fine.  So, that's what I did.  Then, I regrouped and checked the monitor again to make sure I hadn't misread it.  Nope.  Gate C21.  I was at A23.  So, I search the overhead signs.  Ah.  To get to terminals B, C, D, and E, take the Skylink.  The Skylink?  What is that?  So, I find one of those old people volunteers in the purple jackets and they tell me it's a tram that will take me directly to the other terminal.  Okay.  Sounds easy enough - and it was.

Up the escalator I went.  Light, bright, and sunny.  Love this airport.  Clean, friendly.  Good transportation between terminals.  So, I find which side of the platform I need to be on and I'm waiting for the next tram to come by when an older couple approaches me and they start speaking to me in spanish.  See...what did I say in one of my prior blog entries?  Yep, I can speak spanish enough to somewhat converse with others.  And so I did.  I think the folks were a little taken aback, but extremely happy, that a gringa someone could actually understand and help them.  I was happy that I was actually able to talk with them and they could understand me (and also that I did help them). 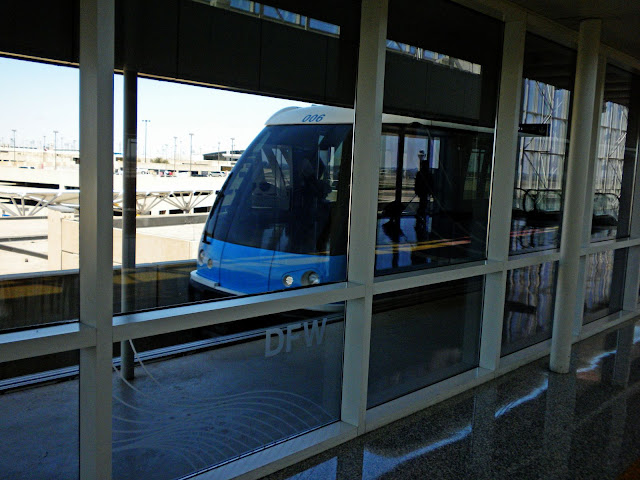 Soon the next tram arrived and I got on.  Man, that thing just zipped right on over to the next terminal.  Two minutes later we were there.  I got off, went down the escalator (why isn't it called something like a descender or something denoting going down?), and headed for my gate.  Now, I was going to have to just sit here for a while and wait and wait and wait.  I searched the gift shops for something for Melon Man for a gift.  I actually found a tie for him that had Texas stuff on it.  Cool.  I hoped he'd like it.  I thought about buying some of their BBQ sauces, etc., but they were heavy and I was tired of carrying heavy stuff.  Maybe another time.

It was well past lunch time for me now and that bagel was long gone so I wandered into the food court with two gazillion other people.  The lines were long everywhere - except at Urban Taco.  Urban Taco...what a name.  Why weren't the lines long there?  I had no idea, but I was willing to try it.  I checked out the menu.  Yeah, that's why.  Not your typical Taco Bell, Del Taco, Taco Time, Taco Cabana, or Taco anything.  It was definitely a different type of taco place, but I decided to try it because the menu sounded really authentic.  Oh. My.  SO good.  (It really is authentic.  It is from Mexico City.)

I had the 3 taco combo.  The first was an arrachera steak al carbon taco.  It had grilled adobo marinated steak, tomatoes, and salsa.  The second was the al pastor taco.  It had chile rubbed pork, pico de pina, and cilantro.  The third was the carnitas d.f. taco with orange slow roasted pork, salsa roja, onions, and cilantro.  The meal also came with poblano green rice.  Talk about good!  I could eat that food every day.  I didn't think I would like the al pastor taco once I saw it because it had fruity salsa instead of tomato salsa, but it was probably my most favorite.  I will definitely have to go there again if I ever go to Dallas again.  Yum-o-la!

Soon it was time to board.  There was just one problem though.  The flight was oversold, first of all.  And secondly, an earlier plane had been cancelled so there were 75 people on stand-by that needed to get on too.  I called Melon Man and asked him what he thought about taking them up on an offer for a free ticket if they offered it for going later.  We agreed I would (that way we wouldn't have to pay for any airline tickets to Michigan this summer since I already have one and this would make two) if they offered it.  But, they never did offer it, so I didn't get a free ticket.  Oh well.  At least I was able to get on the plane and make it home relatively on time.

As we were flying into Arizona, I snapped this picture.  I have no idea what part of the state we were over.  Probably the eastern part because I never saw anything that looked like the parts I'm used to flying over, plus it wouldn't make sense to fly from Dallas up to Flagstaff and then back down to Phoenix.  So, yes, we do have snow in Arizona... 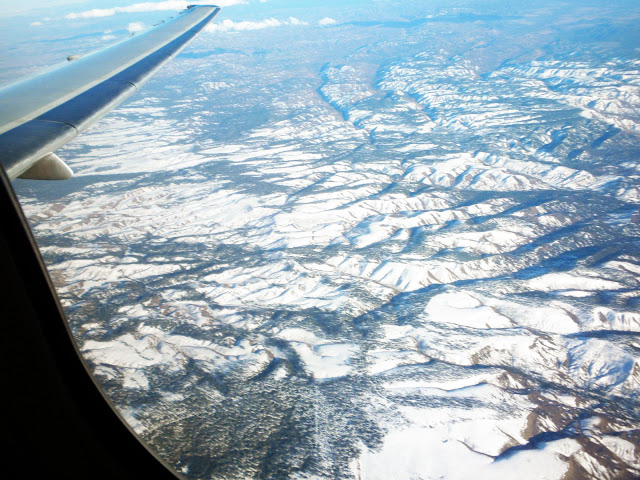 I was totally asleep when we landed and it freaked me out just a little bit to be woken up like that.  But, I'd rather I be woken up by landing, than be all paranoid and nervous as we land.  We arrived at our gate and I was soon off the plane.  I texted Melon Man to let him know we'd landed and he let me know back that he was waiting for me in the terminal instead of picking me up curbside!.  I was happy about that.  I like it when he comes in.

We went down and got my luggage and then headed to the parking garage.  I really don't like the parking garage for terminal 3.  It's kind of mixed up and if you don't park there often, you can easily lose your vehicle if you don't pay attention to EXACTLY where you parked.  And so...yes, we wandered and wandered looking for our truck.  Melon Man said he'd parked on level 3.  So, that's where we went.  Nope, no truck.  Not anywhere.  So, we went back in thinking maybe he parked it on the other side of the terminal.  Nope, he was sure that he came in by that big rug on the wall.  He remembered specific things so he knew he was on the right side.  Well, then, that meant only one of two things...either he parked on a different level or someone stole our truck.  So, we hoped for the first one and went to another level.  After some reasoning and deduction, sure enough, we found it.  It was on this level, not on level 3.  He had seen the three and hadn't thought anything about the BC portion. 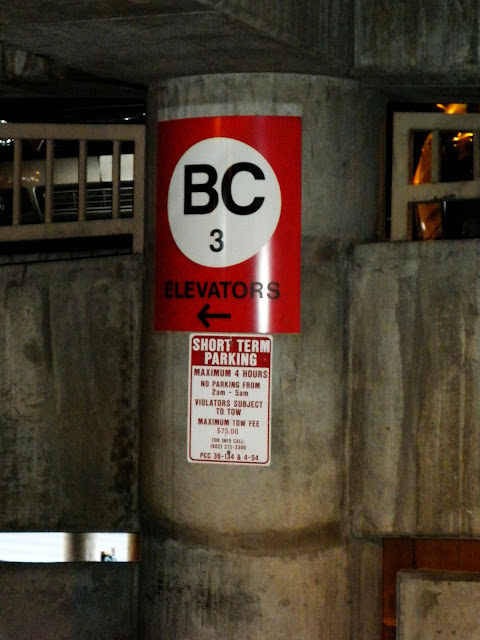 It happens. We just laughed and got in and headed home.  We stopped for dinner at "The Coral" first - we hadn't been there for about 2 months - and then we made it home.  Dog was so excited to see me!  He was sniffing me like crazy.  I had missed him a lot - along with Melon Man, of course.  We even let him sleep up on the bed with us.  It's SO good to be home....

Great pictures from the plane!