I Guess I Just Needed Sleep!

Today at church, a young man by the name of Gavin gave a very nice talk.  Of course, his mom had helped him write it, but it was very nice all the same and he did a great job delivering it.  There was a story he shared that completely caught my attention and really made me think....

In the summer of 1939, two friends and myself, all of us teachers in the Aaronic Priesthood, were hired at a packing shed in Mesa, Arizona. As we worked we talked and laughed a great deal; but, sad to say, the language was usually rough and the jokes unwholesome. There was a fourth young man on our crew, though, who did not join in the swearing and the jokes, and during a breakdown on the conveyor, I asked him why. His answer was like a hit between the eyes. He said, “I belong to the Pentecostal Church. We don’t believe it’s right to do those things.”

The rest of the morning was rather quiet, and at lunch time three ashamed Mormon boys sought a quiet place apart from the others. The general feeling was, “Here we are, holders of the priesthood of God, and it takes someone else to set a good example for us. What are we going to do about it?” We agreed then and there that if any one of us used a bad word, the other two would punch him on the arm.  There were three young teachers with sore arms for a while, but we did succeed in helping each other whip this bad habit.  (Richard T. Harris - Parowan, Utah) 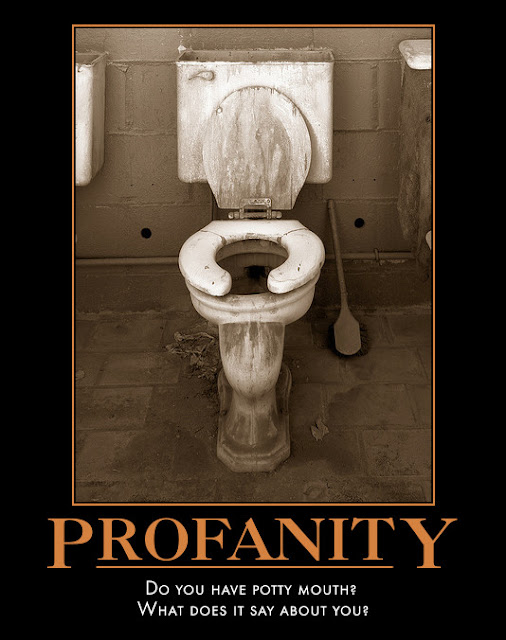 It made me think long and hard about how every time I do happen to use one of the "potty" words, what it says about me.  Do I want to be like others and use words that are unbecoming of myself?  Do I want to let others think less of me because of the words that come out of my mouth?  I know how I look at others around me when I hear them say those words - am I being a hypocrite then when I periodically say one?  YES.

I made a commitment right then and there that I would try harder to continue to avoid those words...at all times.  I don't say them very often, but when I do, I realize how bad they are and how bad they sound coming out of my mouth.  They all remind me of a dirty toilet.  Just nasty.  There's no reason to use them.  It's profanity no matter which one it is...and it's wrong.  So, if you're ever around me and I say one of them, you have the right to punch me in the arm too.

I guess I must have been really tired yesterday.  I slept for 15 hours straight.  Yes, 15.  I felt so much better when I got up today.  I felt refreshed and renewed.  I hadn't been getting much sleep as of late so it was really needed.  I don't like to sleep that long - ever, but I didn't feel well yesterday and I hadn't been sleeping much either so I guess it was okay.  Ahhhh....rest.

What a great story!