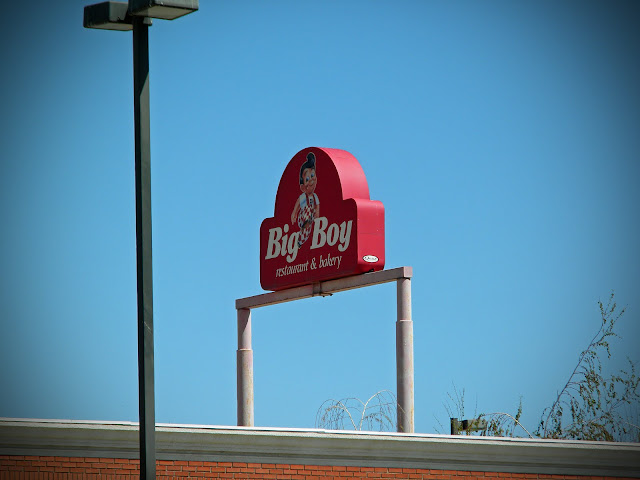 It was time to head home to Arizona today.  Auntie Sigie wanted to head back up the mountain to see Auntie Tia before we all got on the road and I wanted to head down to Rancho Cucumonga to go to Tai Pan Trading.  We were all going to go to breakfast first, but it didn't work out like that at all.  Oh well.  We were going to go to the Big Boy, but once we drove over there, we saw that it was out of business.  I hadn't been to a Big Boy in years - since I was a child, in fact.  Bummer!  So, we headed down the freeway and parted ways, planning to meet up with Lisa and her folks somewhere along the road later in the morning. 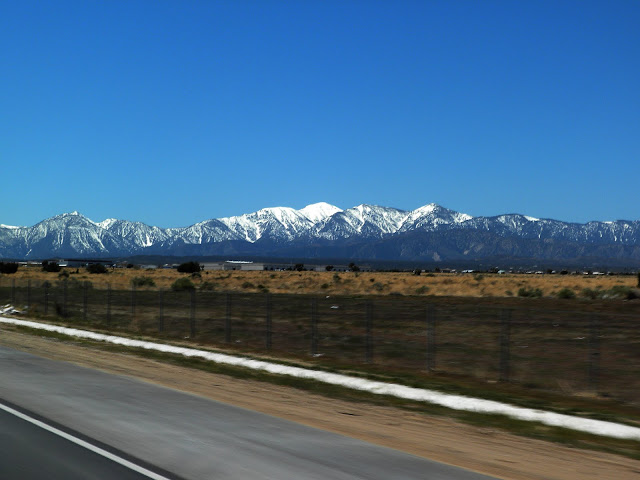 This is a picture of the mountains where Auntie Tia lives.  They still had snow on them and were quite breathtaking.  It was weird thinking that way up there toward the top was the San Andreas fault and my Auntie's house just a few hundred feet from it.  Most people driving down this stretch of I-15 would probably never know that there is a quaint little mountain village up there with tons of memories for so many people.  What great times we've had up in those mountains! 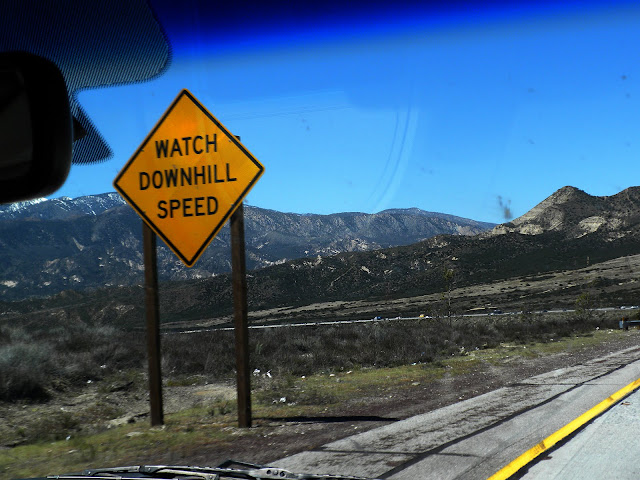 Lately, I have a hard time with the way Melon Man speeds down mountainous roads.  It was no different today and I just had to take a picture of this sign to remind him to SLOW DOWN! 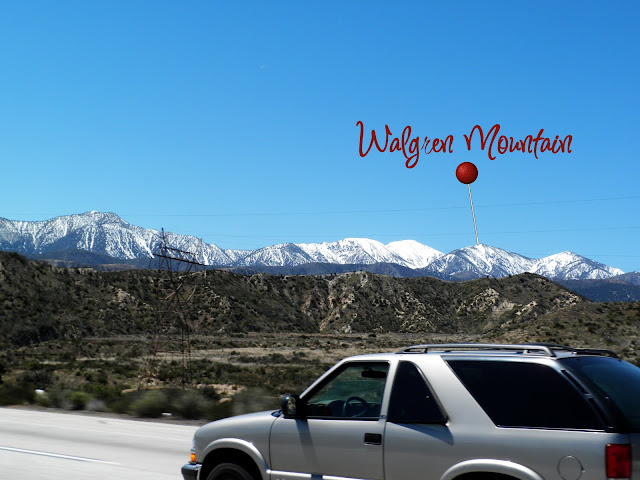 As we drove down Cajon Pass, I looked off to my right and could see what I have dubbed as Walgren Mountain.  From the amounts of snow, I "think" this is their mountain. 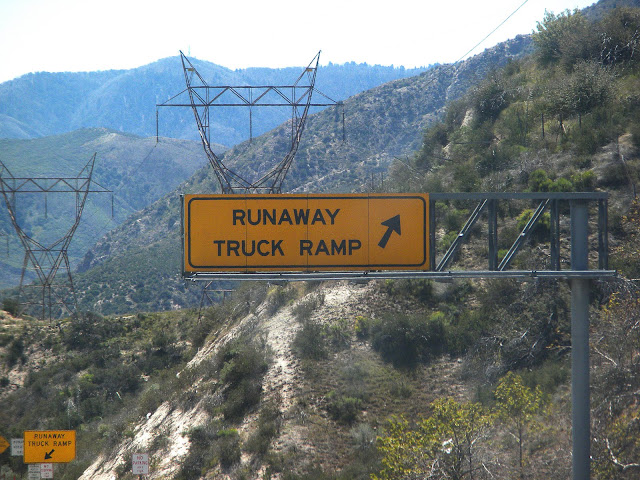 Soon, we were cruising down the hill at exhorbitant speeds and I was freaking out telling Melon Man to slow down or we were going to have to use this emergency runaway truck lane!  I've always been afraid that I'd have to someday use one of those.  I guess it came from growing up near Parley's Summit and seeing that runaway lane every time we went to the Uintah Mountains to go camping or fishing. 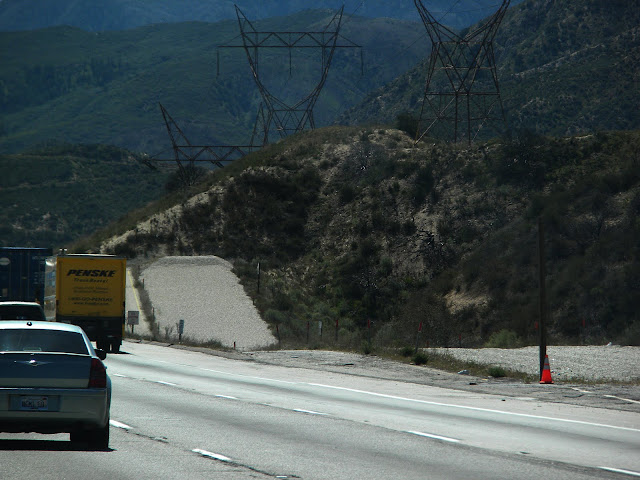 Okay, so once a big, ginormous, fully-loaded semi truck loses its brakes and comes careening (sp?) down a 6 or 8% grade road at 264 miles per hour and decides to pull into the runaway truck lane, do you mean to tell me that this little patch of gravel is going to stop it along with that little "lip" at the end?  And, what is on the other side of that "lip"?  If the truck doesn't stop, where does it go?  Does it fly off into la-la land?  Does it magically stop?  What happens?  What happens?  I need to know! 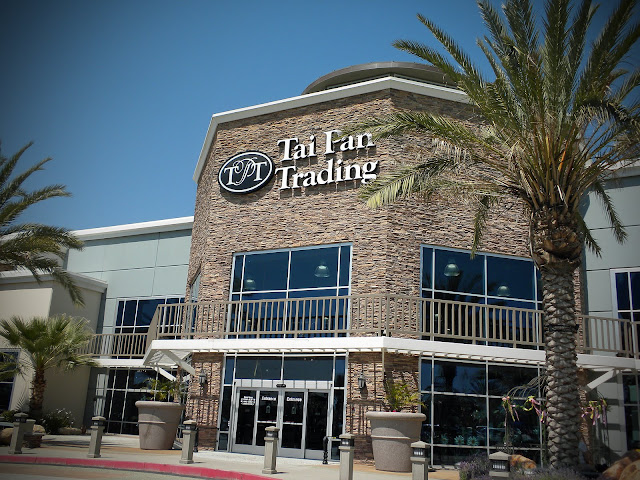 We finally arrived in RC at the TPT store and I was 'almost' in heaven.  I would have been in heaven if Melon Man hadn't been in a rush to get me through the store.  I wanted to look at stuff and he was bored from the moment we walked in.  So, I just kind of perused quickly, bought a couple of necklaces, and we left.  Sad...  I'd waited so long to go and they didn't have anything that I was actually looking for.  (I'm looking for some tall bombay type chests to use for nightstands - like the one I got at Real Deals a while back.)

So, we jumped back on the freeway, turned on the Garmin again, and started driving for home.  Man, am I glad we have our Garmin.  After our Mio got stolen right out of our truck while in the driveway, I decided to buy a Garmin instead because of the Bluetooth capabilities and lane-assist feature.  It was nice having it to guide us around those wild California freeways.  We called Lisa and asked where they were.  They were just leaving the mountain so we decided to take our time and stopped for some food and beverage in Calimesa.  Love those Beefy 5-Layer burritos from Taco Bell!  Yum-o-la!  And...they are cheap!

We were so close to the cemetery where Wendy is buried that we decided to go "see" her while we waited for them to arrive.  Her grave still did not have a headstone so we had to search and search until we found it by the marker. 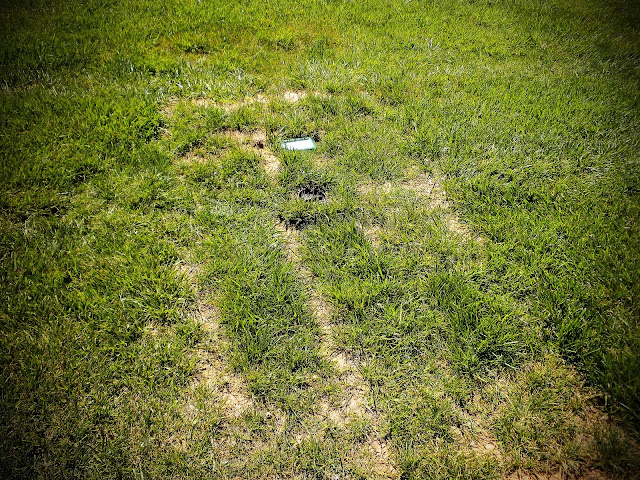 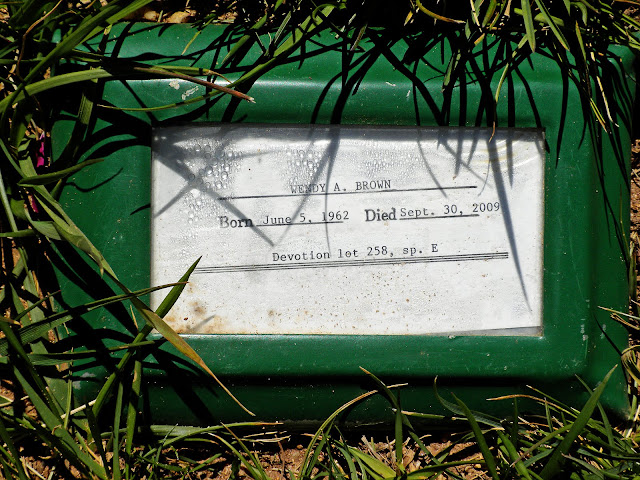 This little marker had her name and date of death on it.  I still cannot believe my sweet cousin has gone back to heaven.  She and my mom are probably just laughing at all of us down here.  They probably were right there to get Uncle Bob as he transitioned from this world to that one.
We left the cemetery and headed back to the exit to wait.  It wasn't more than 10 minutes and they pulled up and we were all on our way again.  However, no more than 15 minutes down the road, Lisa had to pull off to go to the bathroom.  Too bad this rest area was closed! 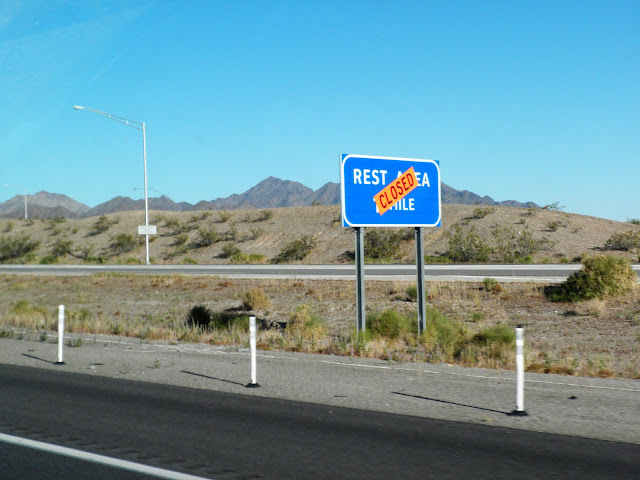 So, we kept heading down the road until we reached Indio where we stopped so she could take care of business.  Soon, we saw this plane flying across the freeway.  We weren't quite sure what was going on.  Was it having problems or was it just doing insecticide spraying? 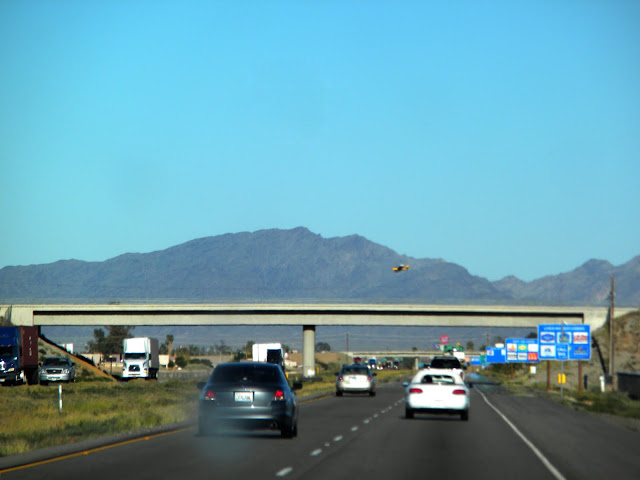 A close-up of the plane.  It reminded me of the part in the movie "Independence Day" where Randy Quaid's character is flying his insecticide plane and spraying the wrong field (because he was drunk). 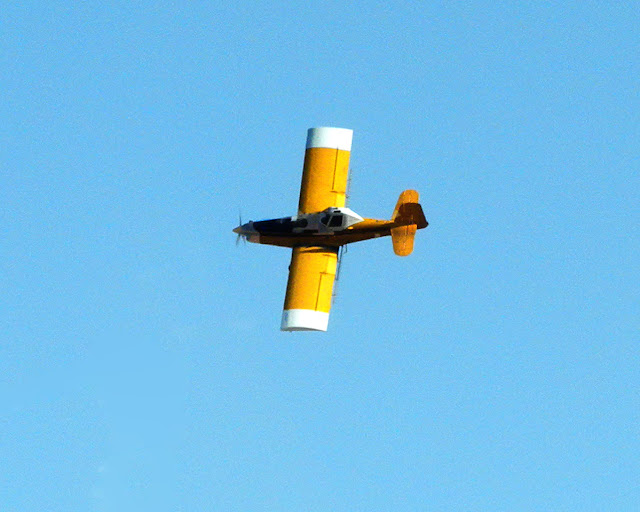 But, apparently, this guy knew what he was doing and he was doing a pretty good job.  It would have made me totally nervous to fly that low to the ground and over so many cars and trucks.  But, I'm sure he's done this hundreds, if not thousands, of times.
Soon, we were past the field and we were driving through a pretty boring section of the drive.  Melon Man and I put in some music and we were just singing away.  We wondered what Lisa and the folks were thinking watching us bop back and forth... 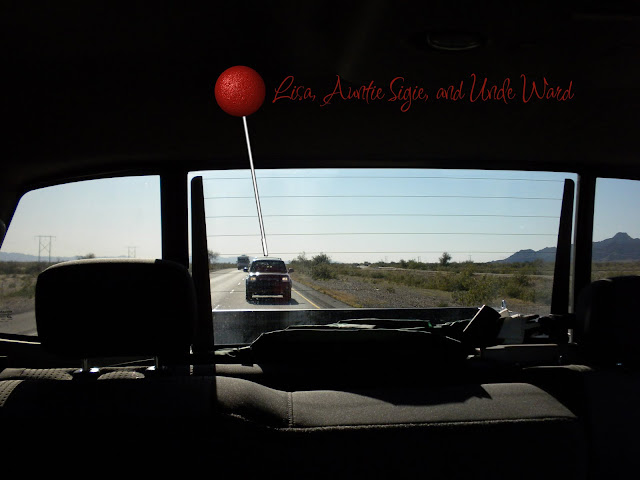 When we stopped along the way to get gas, we both cleaned our windshields.  They were covered with dead bugs.  But, it didn't take long and they were covered again.  Every so often, Melon Man would wash ours again with the wipers and it was quite funny...a bunch of the spray would go flying back to Lisa's SUV!
We saw more of the yellow desert flowers along the side of the road.  They were so very beautiful.  I wished I'd brought my fancy-pants camera so I could have zoomed in to capture the true beauty.  Oh wait....I actually did.  But, I never even took it out of the bag because it was so time-consuming when I only had a quick moment to capture the picture. 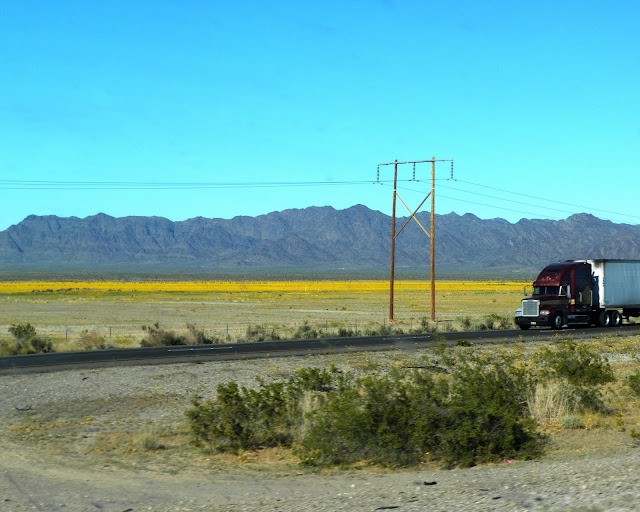 We also saw these orchards.  They were just out in the middle of nowhere.  Weird!  But beautiful. 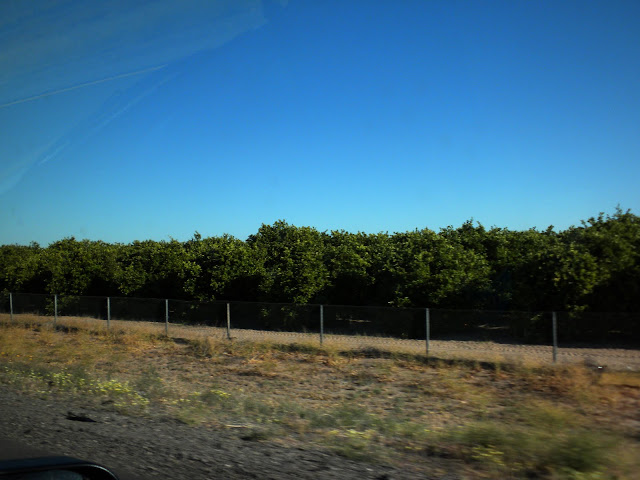 Soon, we were crossing back into Arizona.  Just a couple more hours and we'll be home.  What a short trip this was.  Super fast.  A fun time with everyone, but too short amount of time.  Hopefully, we can all get together again soon for a happy time! 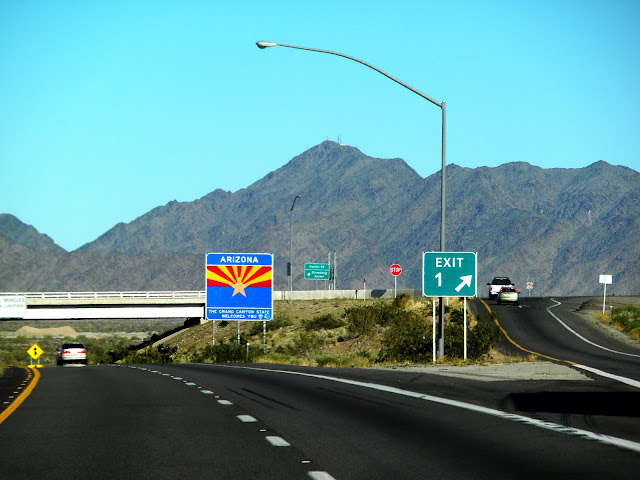 We stopped at the PetsHotel and picked up Dog.  He was so excited to see us!