I guess we must have really needed sleep.  We were both sleeping really, really hard.  I opened my eyes and it was so light and bright in the room.  It wasn't that early morning bright.  It was late in the morning bright.  Surely, it was about 8 in the morning.  I rolled over and looked at the clock.  It said 1:30.  What?  It was 1:30 in the afternoon?  No way!  It couldn't be!  We'd slept that late?  Dang!  We'd wasted the day away.  I hate that.  I yelped out to Melon Man that it was 1:30 and we needed to get up.  I got up and after taking a shower signed onto the computer.  What?  It was only 11:30!  Yay!  I could handle that. 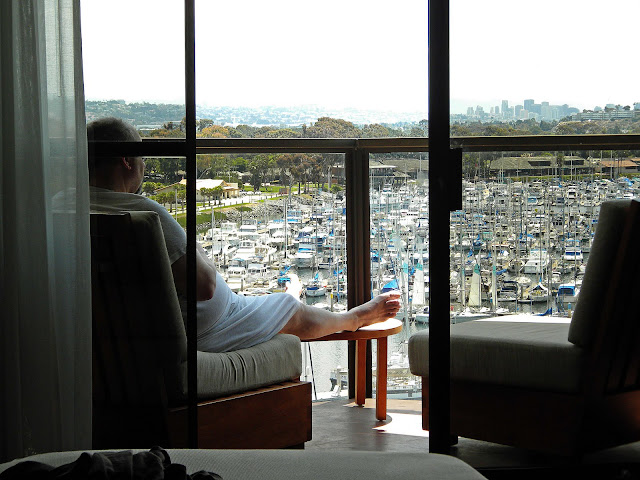 Melon Man spent a little time out on the balcony just looking over the marina and enjoying the cool ocean breeze.  I think he was enjoying watching the sea lions that were sunning themselves out on the fishing boat bait tanks.  They'd been barking all morning. 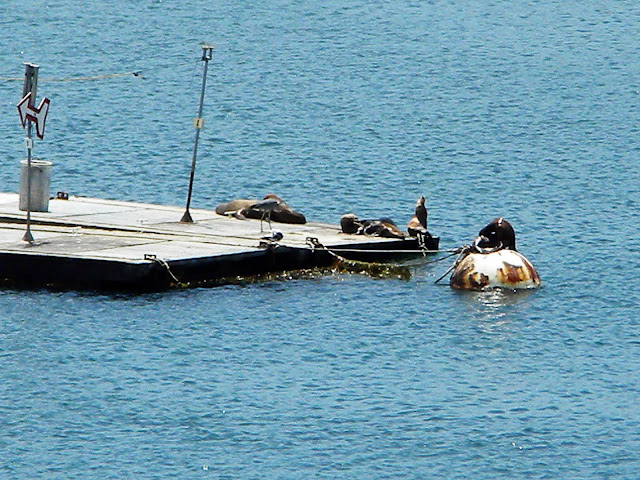 I blogged for a little while and he relaxed and then he came in and showered as well.  It was soon about 3 in the afternoon and we were quite famished since we hadn't had anything yet to eat so we headed out to our most favorite BBQ place in the whole world...Phil's BBQ.  Oh goodness.  Makes my mouth water just typing about it! 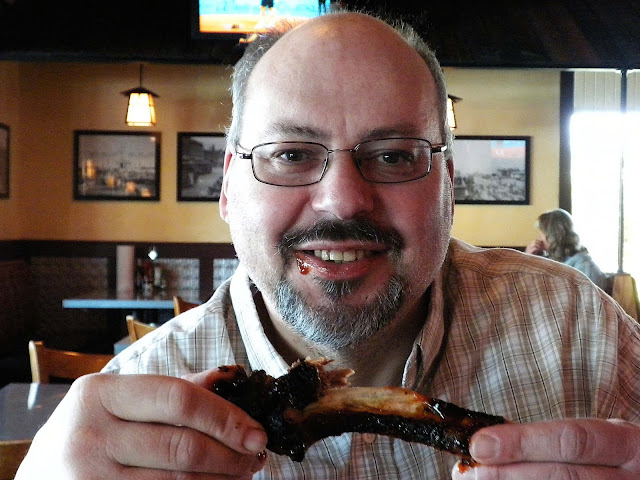 Melon Man was in heaven with his onion rings and his beef ribs.  He didn't even care that the sauce was dripping down his chin.  Look at that smile...makes my heart melt.  He just loves this place. 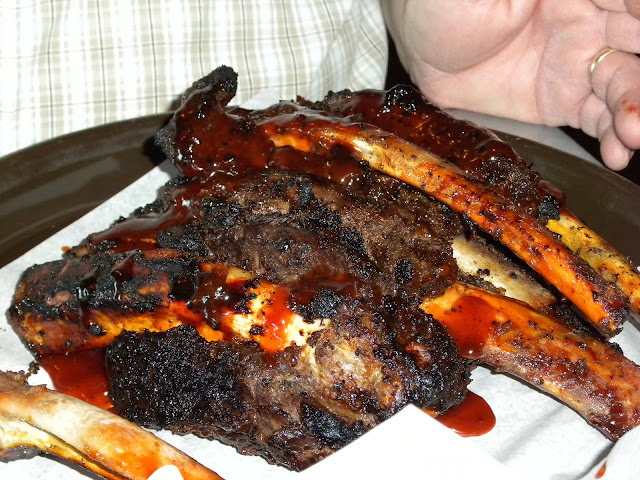 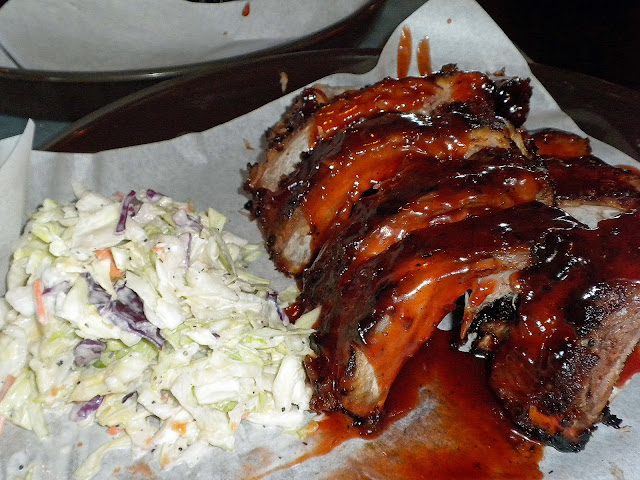 I ordered the baby back pork ribs with the coleslaw.  Usually, I'm a food purist and I don't mix food - Lisa knows this funky secret about me - but I accidentally got barbecue sauce into my coleslaw and oh my heck...YUM.  Not too much...just a tiny bit, but it was FAN-TAS-TI-CO!  We even bought some "Goomba Dust" (i.e. Phil's rib rub) and a couple bottles of their barbecue sauce to bring home.

We were so full when we left.  Melon Man had finished all of his huge ribs, I'd finished all of my baby back ribs, and the onion rings were just a memory.  We left the restaurant and decided to head down to the ocean somewhere.  It never fails...we always end up either on Pacific Beach or up in La Jolla overlooking the water.  Today was so beautiful.  The sun was shining so brightly.  We found a parking spot right in front of a bench.  And, the breeze was perfect.  We'd stopped at our local La Jolla Baskin Robbins and gotten our tradtional cups of ice cream, so we sat there on our bench and ate our ice cream.  We didn't talk much, we just sat and enjoyed the beauty of the ocean. 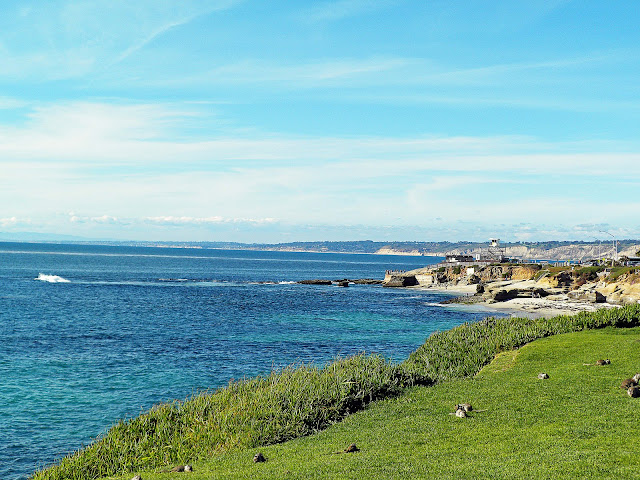 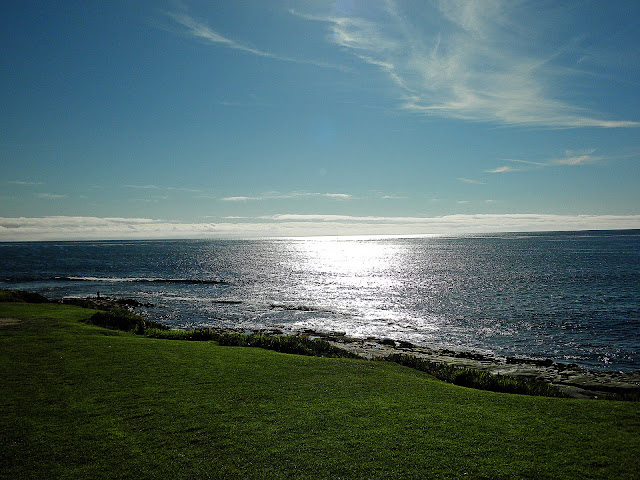 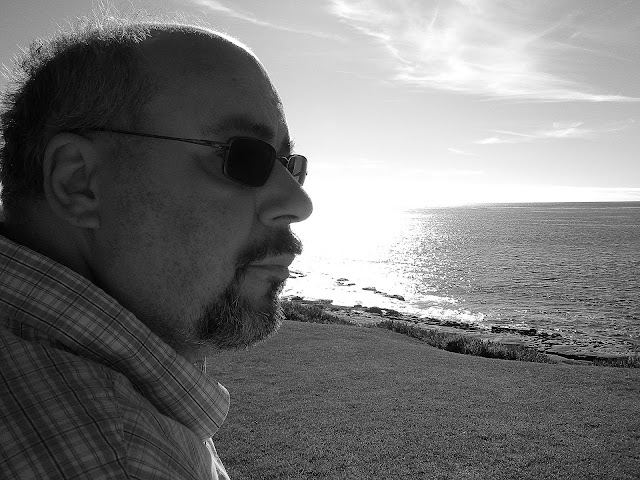 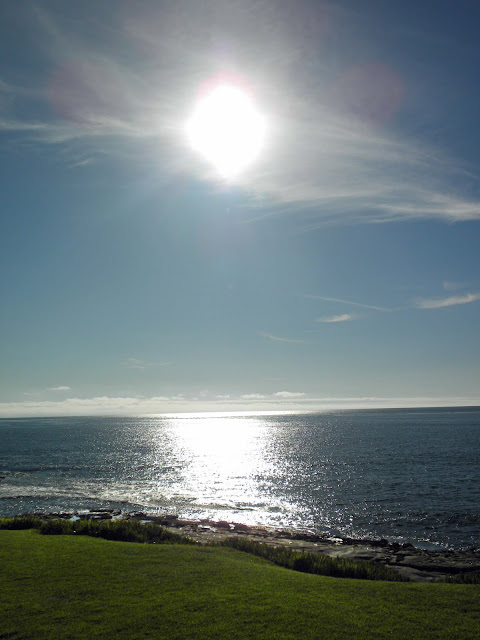 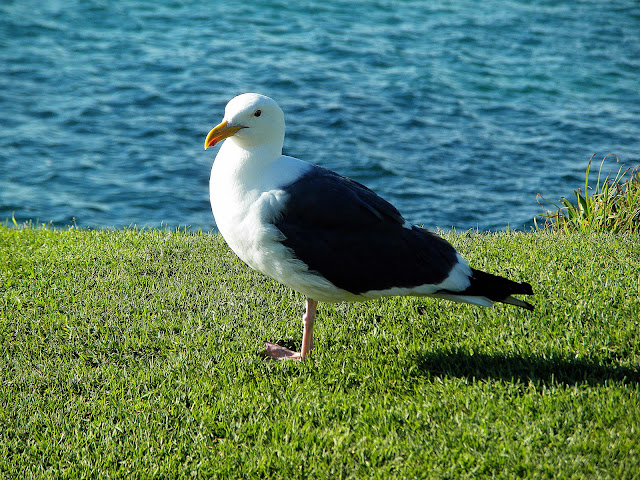 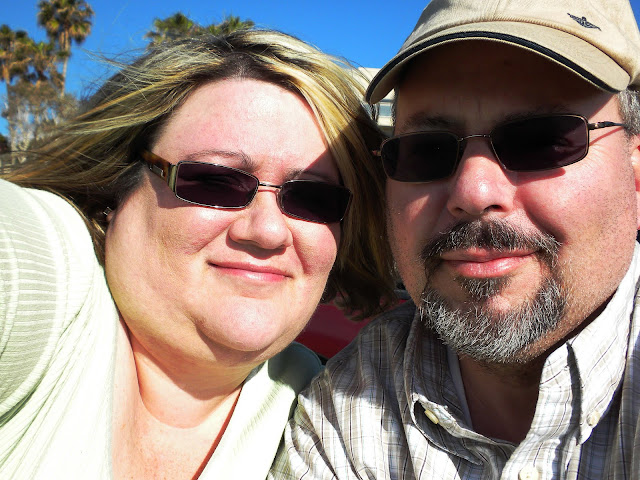 When we first arrived, I'd noticed these little blobs on the grass...what were they, I wondered.  I soon figured out that they were squirrels!  Tons of cute little squirrels.  They were eating the grass.  One of them decided he wanted a taste of my ice cream.  He really liked it.  It was cute watching him grab onto the little pink spoon and try to take it from me, but I wouldn't give it to him.  His claws were just a little too sharp looking for comfort and he had these sharp looking fangs too.  So, we just let him go back to eating grass with his little friends (and some mighty big ones too). 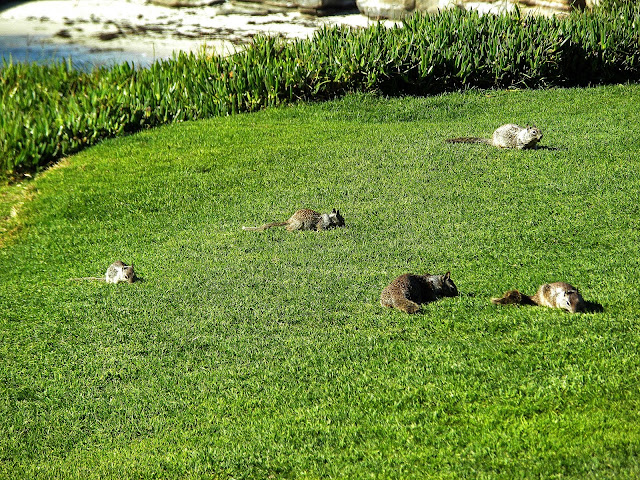 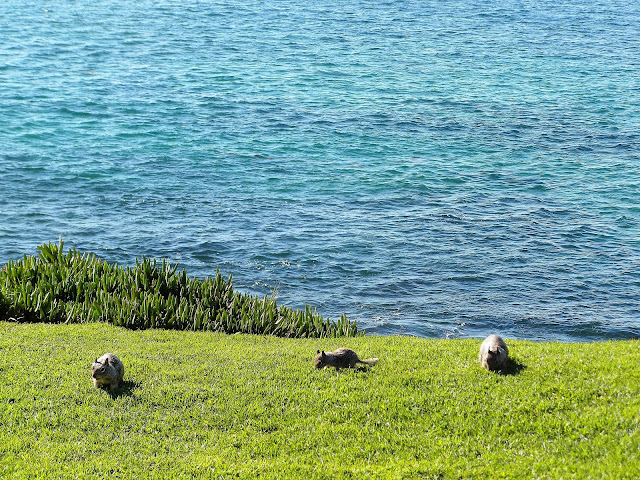 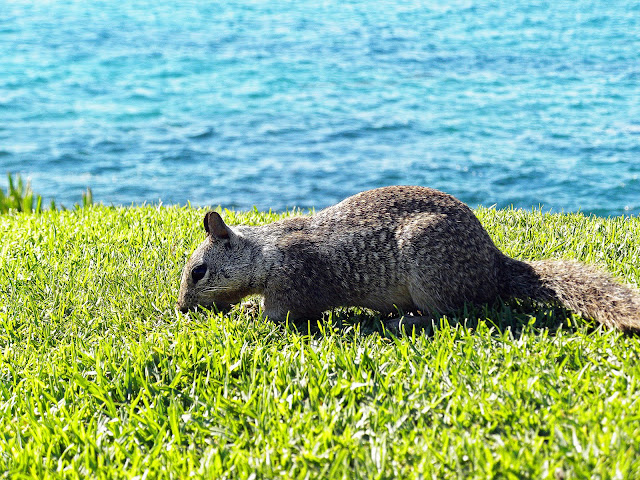 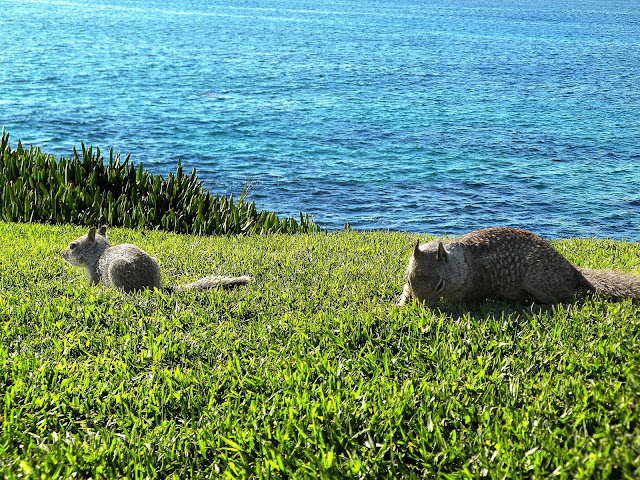 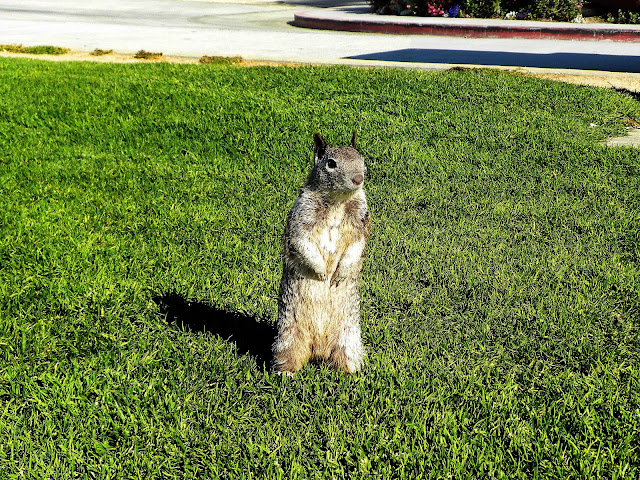 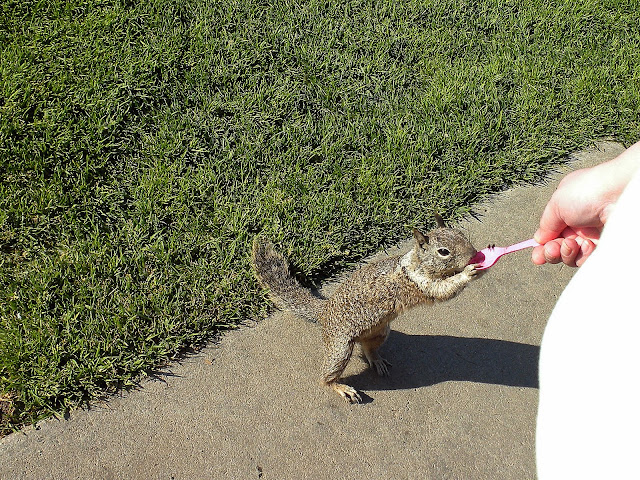 I got down on the ground and was trying to take some really cool pictures of the squirrels when all of a sudden, they all just ran away.  We were like, huh?  For about 3-5 minutes, they were all gone.  Then, slowly, they started to come back and began eating the grass again.  We couldn't figure it out.  Why had they run away?  It wasn't until later that night that we figured it out.  At that very moment, there had been an earthquake there in southern California where we were.  It wasn't big enough for us to feel, but we've all heard about how animals can sense earthquakes before they happen.  About 5 minutes later, they all came out again and started eating again.

I loved this picture of Melon Man just sitting there on the bench watching the world go by (with MY purse) and here is this squirrel right next to him.  It was almost as if they were pals just enjoying a day at the beach, except, they are both turned the opposite direction so it looks like they're actually fighting or ignoring each other at the moment.  Look at their hands on both of them...same position!  That's hilarious!  I didn't even notice that until just now when I posted the picture! 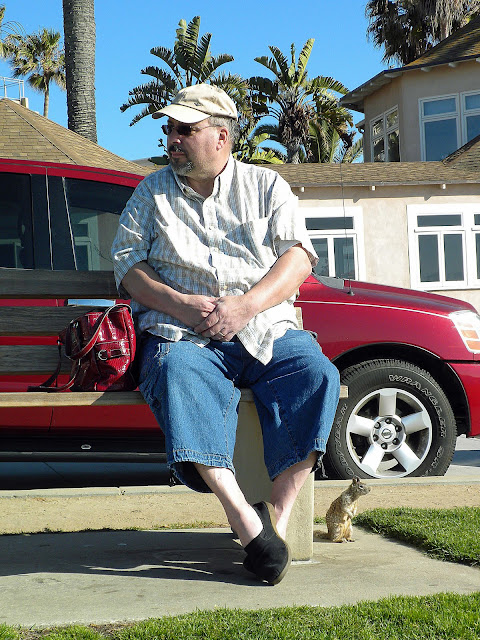 We finished watching the squirrels and then decided to head back to the hotel for the evening.  We just sat and relaxed for the night, knowing tomorrow is the day to head home.  The sunset was phenomenal but I didn't even get a picture until it was too late.  I did love these pictures that I took though... 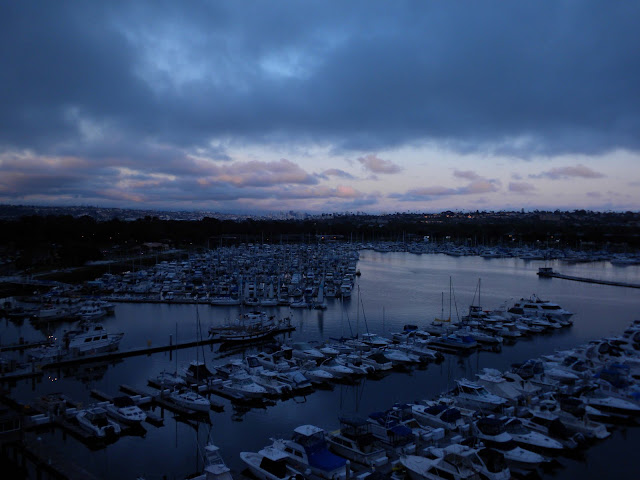 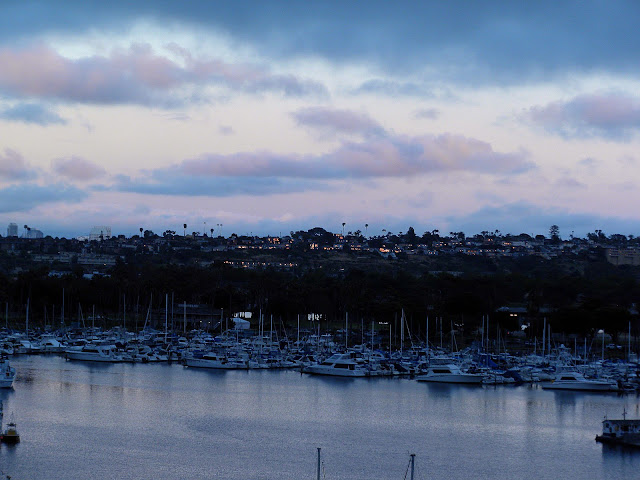 Around 9:45 p.m., we decided to head out for some food.  We decided on pizza at Filippi's again.  We drove over the bridge to Pacific Beach and were able to park almost right in front of the restaurant, which is usually impossible.  We walked up to the door and they'd closed early!  Usually they are open until 11 p.m. on Tuesday nights, but it must have been slow and they closed early.  Bummer!  So, we walked back to the truck with our heads hung low and our stomachs growling and drove back to the hotel.

Our short trip is almost over.  I wish we had more time to stay and just relax.  I so need just a couple more days....

Such pretty pictures. Those squirrels were something!