Well, since we missed getting pizza again last night, we decided to go there for breakfast (well, really lunch) instead of going to Hash House.  It was just easier and faster...and, we could bring some home with us.  It was yummy and soon we headed out for home.  Once again, I fell asleep pretty quickly.  I woke up finally and Melon Man was getting ready to pull off the side of the road.  I asked why he was getting off the freeway in the middle of nowhere and all I get is "I gotta pee."
Yep, that's right.  He couldn't hold it another 30 miles so we had to pull off.  There was no place that was somewhat private.  He just stood there on the side of the road and did it.  I couldn't help but take a picture!  (No viewable action or parts shown though!) 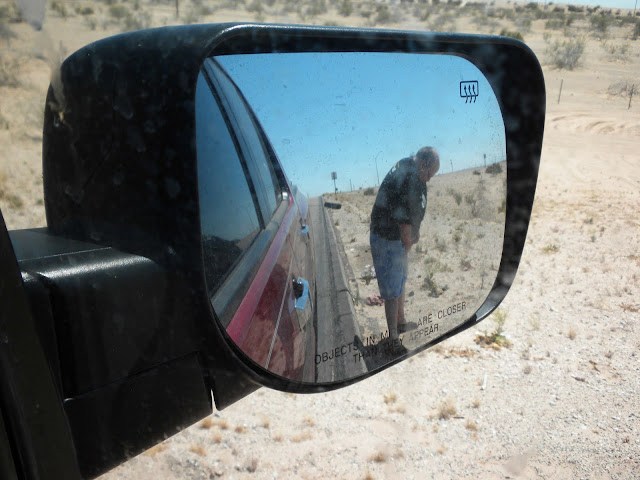 He was soon done and we were on our way again.  It wasn't long and we were in the heat again.  Oh how we miss the cool California breeze already!  I love our new GPS.  It's a Garmin Nuvi 1650. 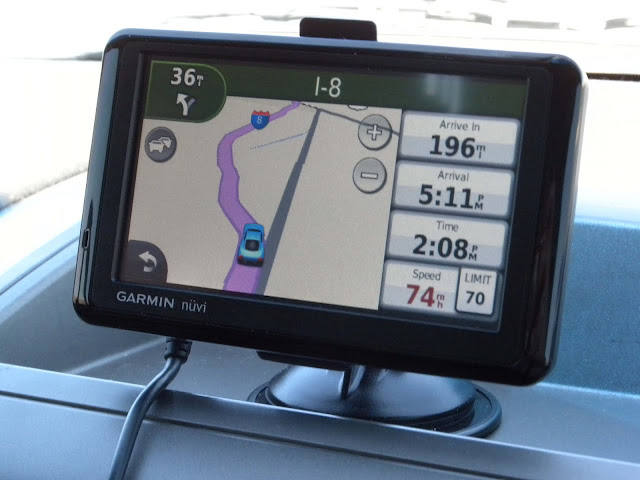 I loved that it showed us exactly how close we were to the US/Mexico border. Yeah, that's us in that blue car and the gray line is the border. Pretty dang close...yep...that big black wall is the border fence.  See just how close we were....according to Google Maps, about 1,000 feet away.  It's kind of surreal thinking that it's a whole other country and life on the other side of that fence.  (Sorry the picture is so blurry.) 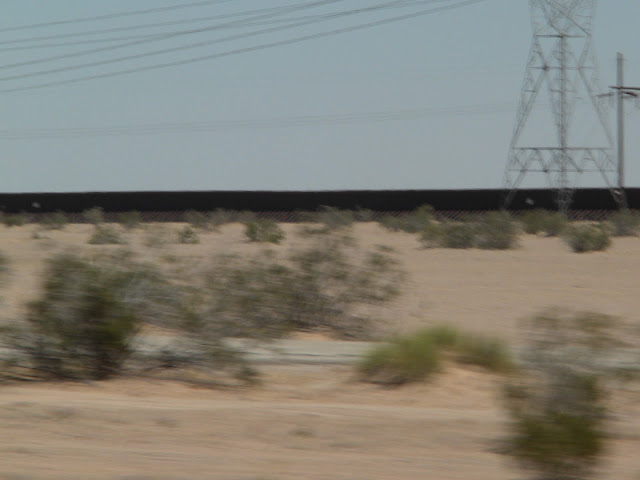 Arizona is getting so much flack right now for our new law that allows police officers to inquire about a person's citizenship if they are caught violating another law.  People don't understand the real issues here though.  I thought a lot about this while we were "speeding" past this fence - literally.  These are the real issues:
1.  Arizona is filled to the brim with people, mostly Mexicans, who do not have a LEGAL right to be here.
2.  Many of said people DO work hard to make a living doing jobs many Americans do not want to do (i.e. farming, cleaning, landscaping in the heat, etc.) BUT these are American jobs for American citizens or others who are here LEGALLY.
3.  Yes, many Mexicans come here to make a better life for themselves because living back home is hard.  But, they should get involved in their own government and make change there.
4.  We have a proper way of coming to this country - everyone should follow it - not just a few.
5.  If you want to be here, be a citizen.
6.  Because illegals have no medical insurance in this country, when they need to go to the emergency room, they get their care for free because they can't pay either.  When we go, don't have insurance, we get jacked with a high bill and sent to collections for not paying.
7.  This country speaks english, not spanish.  If you want to speak spanish, do it in Mexico or in your home that you've bought with LEGALLY earned money that you've paid taxes on.  In public, speak english.
8.  If you do the crime, you'll do the time.  Or, you'll go home to where you came from.
And with that said....ANYONE here who is suspected or accused of a crime - Mexican, Korean, African, German, American, whatever-an - we're going to ask for ID and proof of citizenship.  If you're here illegally, you'll be arrested.  Simple as that.  We're not going to just drive down the road and look for Mexicans to arrest because they're standing on a corner waiting for a truck to pull up and ask them to come throw rock for 3 hours in 112 degrees - heck, that's punishment enough.  But, if you kill someone, hurt someone, steal something, speed, drink while driving, or whatever other crime you may do - it doesn't matter what nationality you are...we'll find out and take appropriate action.  Because, mis amigos, comrades, mon amis, etc., this is America and we have enough of our own problems right now not to have to be worrying about feeding and employing people who can't be bothered to come here LEGALLY.
Okay, I'll step off of my soapbox now.  It just kind of irks me that people are so mad at us for wanting to protect our borders and our country.
So, we continued on our way and in a while we saw this field.  It was filled with onions!  It was so pretty - I wish we could have stopped to actually take a picture, but by the time I could have even made the suggestion, we were past it.  It was one small field out of many other big fields of produce out in the middle of nowhere. 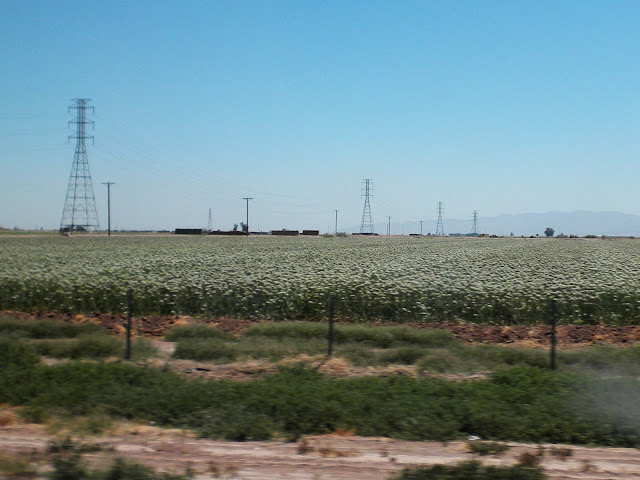 Pretty soon, before we knew it, we were home.  It had been a whirlwind trip but it was so nice to just get away for a couple of days...some place cool and relaxing...with no cares in the world other than where to eat and when to sleep.  Some days I wish every day could be like this!

Okay. I totally agree with your law and your soapbox. We come from an immigrant family! They showed us the proper way. They came to America and changed their native language, worked hard LEGALLY, and obeyed the law. They changed their citizenship not just for their benefit, but for future generations yet unborn! I am SO grateful for their example and insight.

Right there with ya, sista!