Happy Independence Day!  First, I have a short video to share that made my heart just pound in remembering the sacrifices of those who gave their lives for our country 234 years ago.  In this video, it is a group of Tea Partiers who are listening to a speaker give an answer about how some people want to remove the words "under God" from the Pledge of Allegiance.  The man finishes answering the question that was posed and then moves on to the final question of the night.  What happens next is amazing.  Besides watching "Lewis", who WILL captivate you, watch the people in the background as well.  It will fill your heart with pride at being an American. 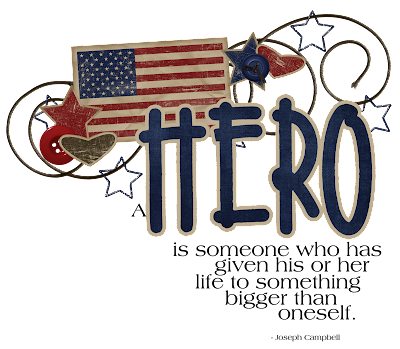 O! thus be it ever, when freemen shall stand
Between their loved home and the war’s desolation!
Blest with victory and peace, may the heav’n rescued land
Praise the Power that hath made and preserved us a nation.
Then conquer we must, when our cause it is just,
And this be our motto: “In God is our trust.”
And the star-spangled banner in triumph shall wave
O’er the land of the free and the home of the brave!
Those words are just as powerful today as they were then.  Our country is headed in a horrible direction.  It's amazing how when the going is good, people give credit to themselves, but when it's not going too great, they finally turn to God.  Well, it's time that our country stop trying to take God out of everything and give Him the credit He is due. 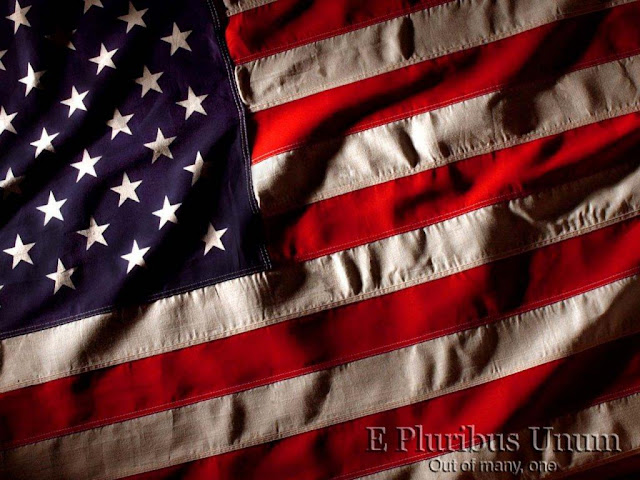 After church today, we came home and got ready for the family to arrive.  We were having a very quiet celebration today - very simple, very light.  We're all tired, getting older, etc., etc., so the big parties are starting to kind of dwindle down in our lives and we tend to enjoy the more intimate, small, just dinner, no big hoopla type of gatherings. 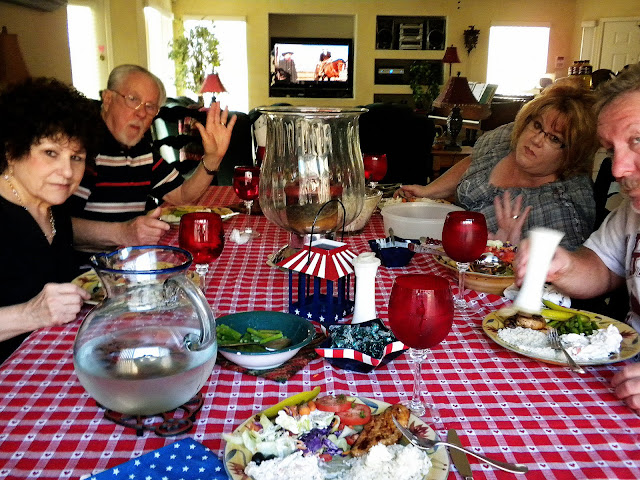 We marinated and then grilled some chicken on the BBQ, had Lisa's seafood salad, a tossed green salad, a veggie tray, and then chocolate eclair skrumpit cake for dessert.  It was as simple as that.  Nothing major.  But it was good and tasty. 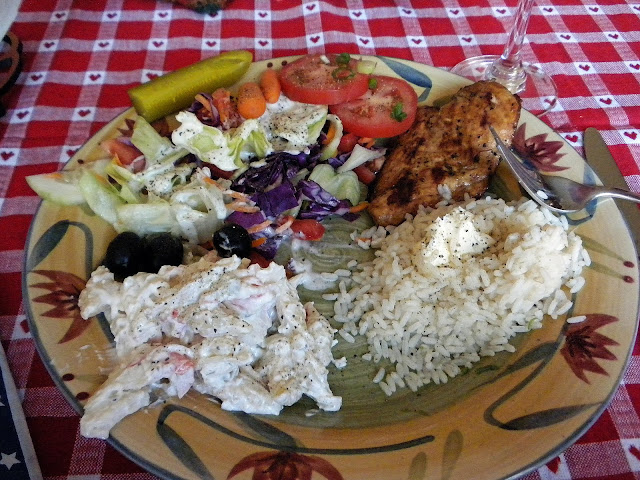 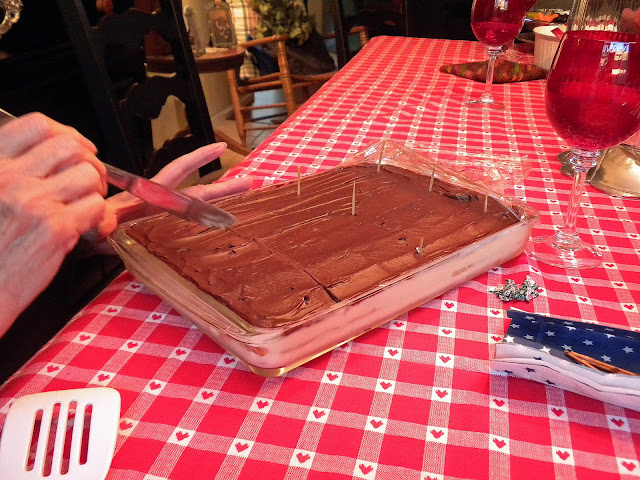 Can you believe it?  Auntie was licking the spatula.  No, just kidding!  She would NEVER do that!  It was all we could do to talk her into pretending for the picture! 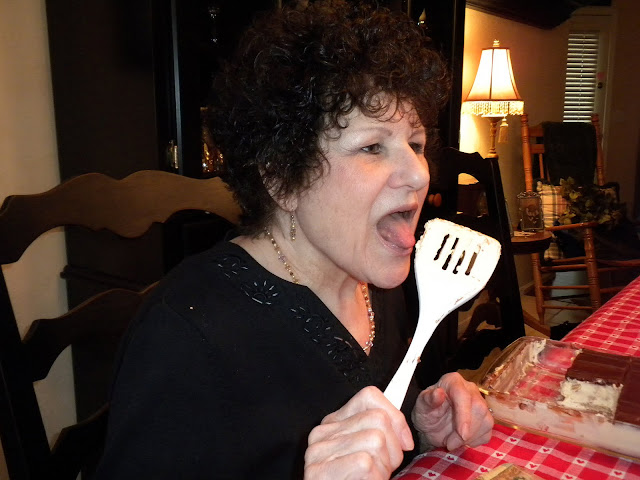 I haven't decorated for any holidays except Christmas for years, so I actually tried to do it up a little more today.  Doing so made me realize that I really don't have much in the way of patriotic decor. 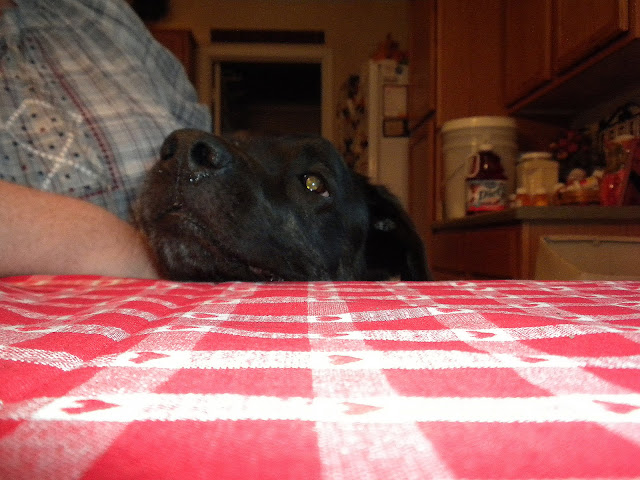 Dog tried to get in on some of the action, but we wouldn't give him anything.  Don't these eyes just make you want to just cuddle and hug on him?  He's so sweet! 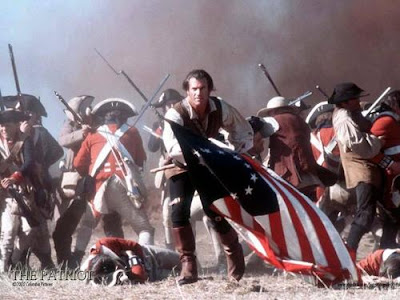 We wanted to watch The Patriot after dinner, which is probably one of the best American Revolution movies ever and has pretty much become an Independence Day tradition, but it wasn't on today for some reason and so it was John Wayne movies for all.  Mr. Spock and his parental units would have been shocked to hear that John Wayne was on the tv in my home.  I've actually begun to like some of his movies, believe it or not!

Around 8:30, we headed outside to the front yard to watch the fireworks over at the stadium.  Dog actually stood and watched some of them too after he got over the desire to run all over the neighborhood and visit with everyone.  He didn't get scared of them either, so that was good!  We've always had a really good view of them from the front yard.  I love that we don't have to fight the crowds to see them!

It ended up being a very nice day.  And...I still have tomorrow off since the holiday fell on a Sunday!

This is the marinade I used on the chicken.  It was pretty good, although I did grill the chicken too long, unfortunately (Melon Man is our griller and he was sleeping). 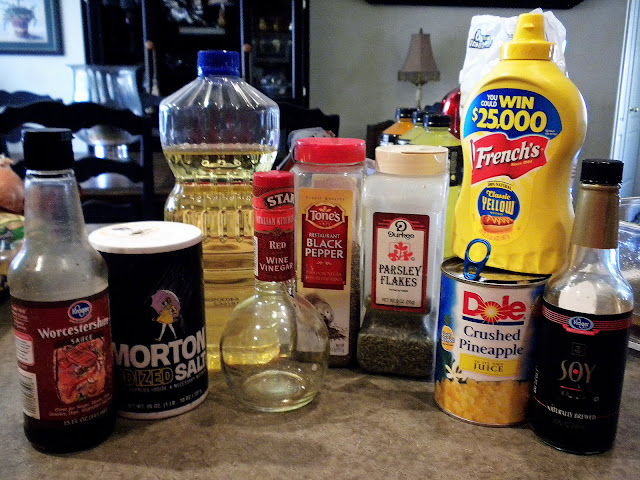 Stir all ingredients together in bowl.  Use to marinate chicken before cooking as desired.  The longer you marinate, the more flavor it will have.  Also, be sure to only put 1-1/2 TEASPOONS of parsley in.  I put 1-1/2 TABLEspoons by accident. 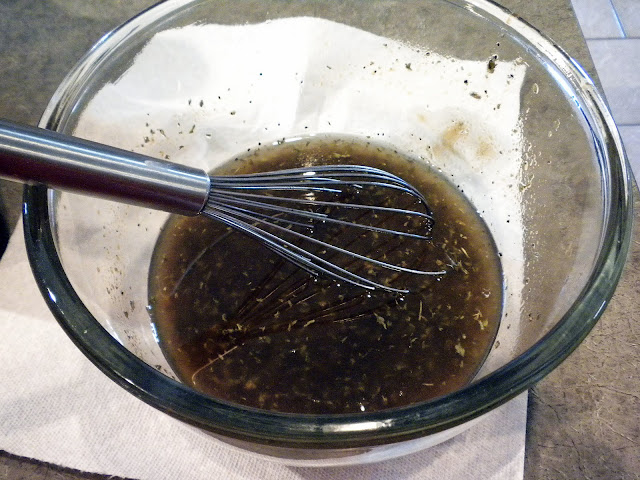 I wish I'd taken more pictures than these of the marinade, but I didn't.  Oh well.  It made enough that I grilled 11 small to medium chicken breasts, had a bunch to throw out in the bag, and then had a container for another day in the fridge.  So, halving the recipe would have been just fine.

One last thought and picture for the day.... 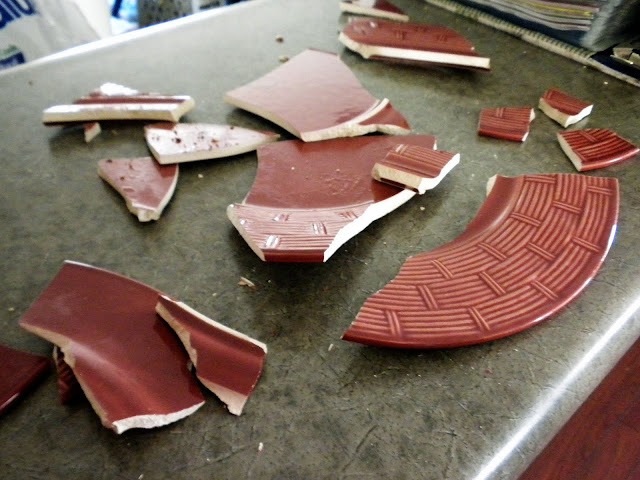 I won't go into all the details here, but let's just say that this WAS one of my favorite plates.  It's out of stock now so it's not easily replaceable.  I did find it on eBay for $20 plus $11.50 s/h, but that's just too much.  The whole experience taught me a good lesson and required me to say....

...and everytime we now have 8 people for dinner, I will be the one with the odd plate and it will force me to remember what happened so it doesn't happen again.

Poor plate! Yeah--I have some stories of broken things too....