What a Long, Short Week!

What is it about short weeks that make them so long?  This was a 4 day work week due to the Labor Day holiday, but it seemed like it took forever for the weekend to get here.

I had a bout of depression on Monday and Tuesday.  It was horrible.  I was just so sad.  I couldn't quite figure out why except that I'd missed a couple of days of my happy pills throughout the week and Tuesday was the first day without my boss and maybe I was just a little nervous about that - not because I NEED to be managed - BECAUSE I DON'T - but because I work in a team now that has direct access to all of the VPs and higher and since I'm still new enough to that arena, I guess I just wanted a little bit of "backup" in case something came up that I didn't know how to handle.  Okay, so I know I could have just called Mr. Former Boss and asked my questions, but I was trying to make a clean break and not rely on Mr. Former Boss.  I also know I am a resourceful person and would just work until I found the answers - with or without Mr. Former Boss, so why was I so "worried"?  In all reality, I really do think it just came down to the fact that I really liked my boss and to not be working one-on-one with him anymore was just sad.  He's taught me a lot and he's really cared about me as an employee and as a person.  It's hard to find bosses like that nowadays.  I hope my former employees have felt that I have been that way for them.

I worked on the 2011 Plan all week and it's been long and tiring.  I've worked a ton of hours - sometimes 15-16 hours a day.  I've held all kinds of meetings with the cost center managers regarding their budgetary needs for next year.  To top it all off, we had to start working on the September forecast this week too.  Essentially, that's like doing a whole extra Plan, but only having to do it for the current month and the remaining months.  So, more meetings with the cost center managers.  Don't get me wrong...I LOVE MY JOB.  It's just difficult sometimes when Plan and Forecast fall at the same time.  I had a meeting with the Directors and the VPs for the area I support and it went fairly well.  It was my first time "driving" this meeting at this level.  Of course there were some things I could improve on - like not getting into the details too much - just giving high level info instead and letting them ask about the detail stuff when they want to - but I'm still learning.

One night during the week, Melon Man called me at work around 8:50 p.m. and asked if I had his keys.  I told him no - why would I?  Well, I decided to look in my purse and sure enough, there they were!  We had gone somewhere the night before and I had driven home using his keys.  When we'd gotten home, I'd just dropped them in my purse as if they were mine.  He needed them so he could go to work.  So, I quickly locked my computer, locked my office, and practically sprinted to the truck.  I raced home and luckily hit every light green except one just as I got off the freeway.  That's excellent considering there are 25 stoplights coming home (and 27 going to work).  I made it just 2 minutes after he was to have left, so he was almost able to leave on time.  We quickly said hello and goodbye and he was off.

On Wednesday, around 4 pm, I'd finally had enough for the day.  My brain hurt.  So many numbers....so, I left for the day.  I'd been there since 6:30 in the morning and I was just beat.  I stopped off at the Fedex Office store and had a couple cute posters printed for the ward campout.  I had never really thought of doing it that way before...I'd always just don't it the old fashioned way with posterboard, lettering, etc.  I designed this over the weekend and took it in and had it printed on 11x17 paper and voila, lickety-split it was done!  Yeah, it was totally worth the $4 to have 2 of them made!  I mean, really, foam core boards are that much for 2 alone, without all the other time, effort, and stuff you put into them.  So, I'll be doing it that way from now on! 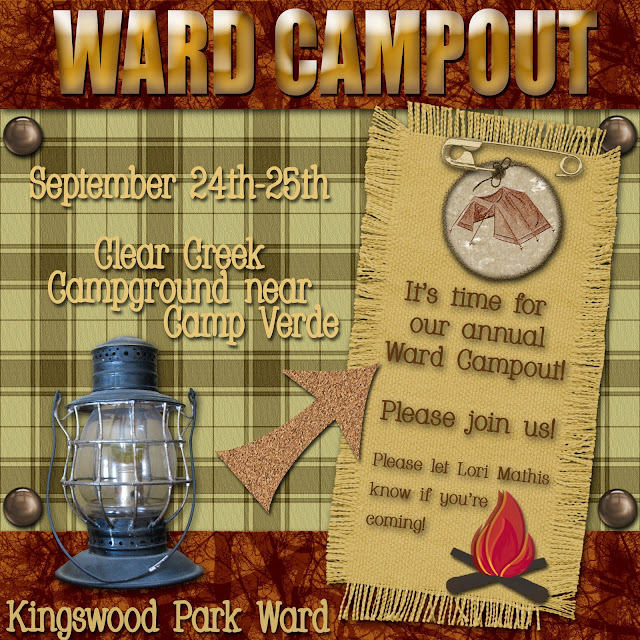 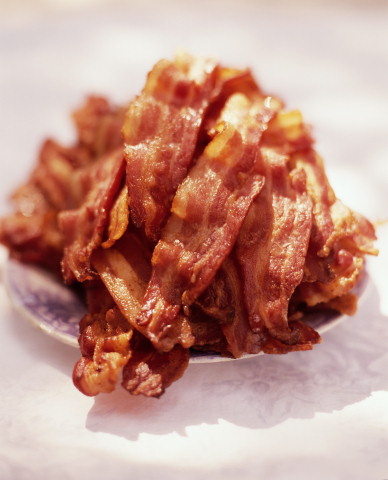 Even seeing this picture of bacon makes me want to gag.  So, why am I writing all of this about bacon?  Well, my Melon Man LOVES bacon - almost as much as my dad does.  Yes, both of them could eat an entire pound of bacon themselves.  And yes, both of them would sop up the grease in the pan with a piece of bread or a biscuit if you let them (can you hear their arteries gasping for breath?).  Well, on Melon Man's days off, he likes to make himself a big ol' hearty breakfast with a bunch of bacon and some eggs.  How is it that the smell of the bacon still lingers after 8-10 hours?  I can come home from work and still smell it - and I gag the second I walk into the house.  He has begun lighting a candle to try to help, but apparently the one we have right now is not strong enough to mask/eliminate the odor.  I'd rather he cook fish for a week and have to smell that than have to smell bacon all night while trying to sleep and then smelling it in my hair all day the next day at work.  Yuck!  But...alas, my Melon Man loves bacon and so I keep putting up with it.  I'll just have to find a really good candle to help with the odor....
Just a quick note that we've begun seeing a slight cool down in the weather here this week.  I've actually had the front door open in the mornings a couple of days this week.  They say it's supposed to warm up again though next week.  Bummer.  If only the water coming out of the faucet when I'm brushing my teeth would cool down...then I'd know for sure that "fall" is on its way....

Totally cute poster! You are so talented!!!

Sounds like you are running yourself ragged. Be careful! And yes, I hate the smell of bacon too. It gives me a headache. Blah!

What if Melon Man cooked it in a pan on the grill outside. It will still taste the same and eliminate the odor in the house.

Sorry! I could eat a pound of the nasty stuff myself.

Love the poster! You need to take some time out for yourself.

Need to ask you a couple of questions. Will e-mail soon.