Both of us had today off, so we went to the eye doctor.  It was Melon Man's first time seeing Dr. Lambert.  I just REALLY like her.  She tells it like it is.  Our exams didn't take very long, but it was the picking out of new frames that took forever - yes, over 2 hours!  We just happened to be the comic relief for the office crew.  I think we tried on just about every pair of frames there were.  I so HATE the frames I currently have and I wanted something far more fun, creative, stylish, and you know, just different!  These are the ones I liked, but Melon Man said they were too frumpy on me so I ended up getting a completely different pair. 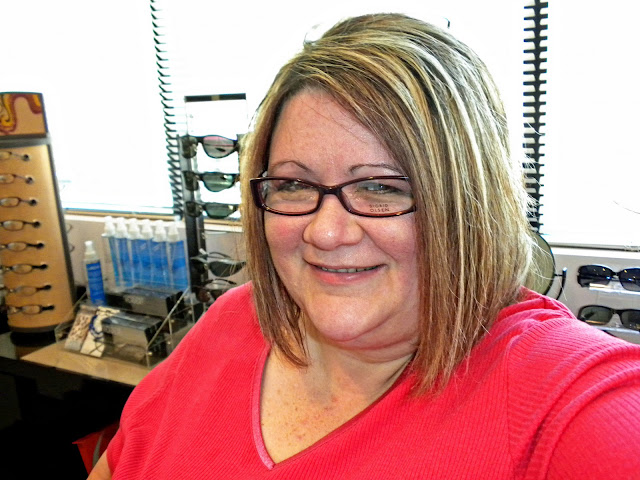 Now, for Melon Man, he literally DID try on just about every pair in the store.  But, these are the ones he was most willing to consider.  I said ABSOLUTELY NOT to the ones in the middle.  They looked like total turtle birth control glasses! 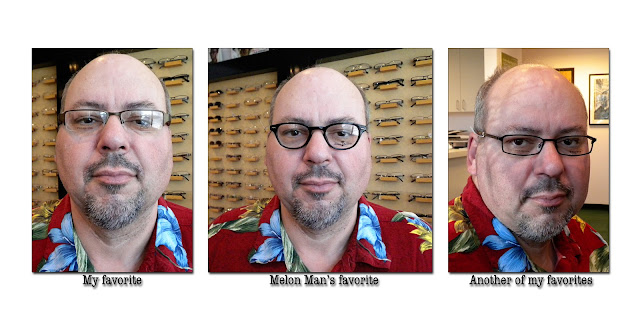 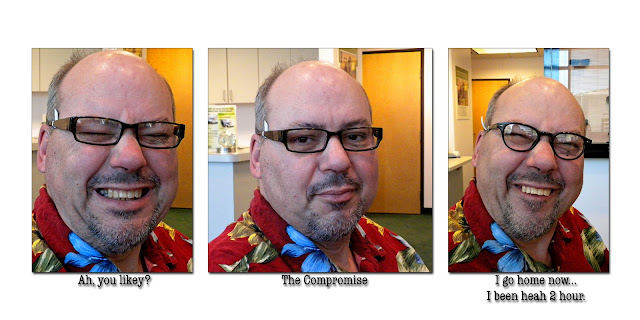 He finally settled on the ones in the center on the second set of pictures.  The rims are a bit bigger than I would have preferred for him, but it was a compromise.

After we were done with the comedy show at the optician's, we went to Chompie's for lunch.  Doesn't Melon Man look thrilled in this picture?  Actually, he was just staring at me - no specific thought or feeling, just a stare. 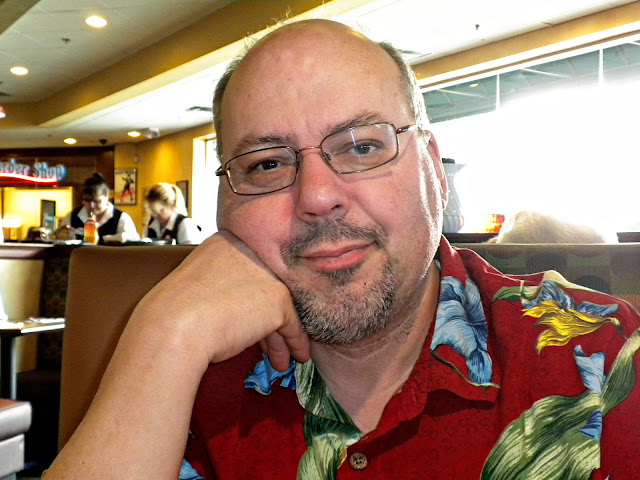 We hadn't ever sat in the section where we sat today.  It was definitely an interesting perspective!  One of the things I miss about the old location on Greenway and 32nd Street is the mural on the wall of the New York skyline.  But, it was dated and probably was ready for a change.  So, when the restaurant was moved to it's new location, they updated the mural on the wall to be something completely new, but up near the ceiling, they did this really cool version of the skyline, even highlighting the 'former' World Trade Center towers. 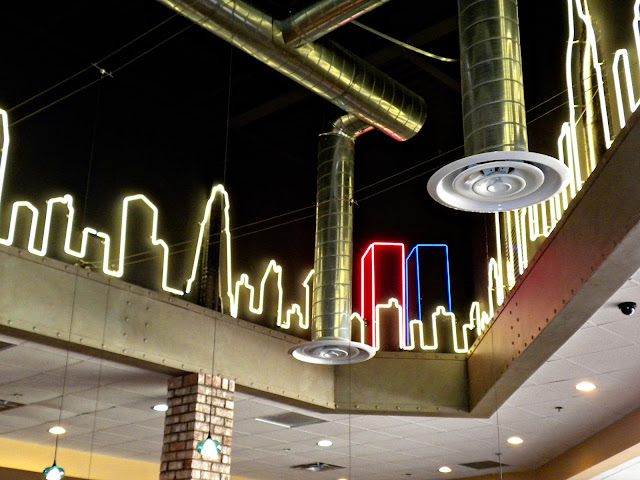 We started off with the onion strings.  Yummy.  Oh man, though, is it going to be a stinky time in the truck on the way home!  Melon Man and onions just do NOT mix! 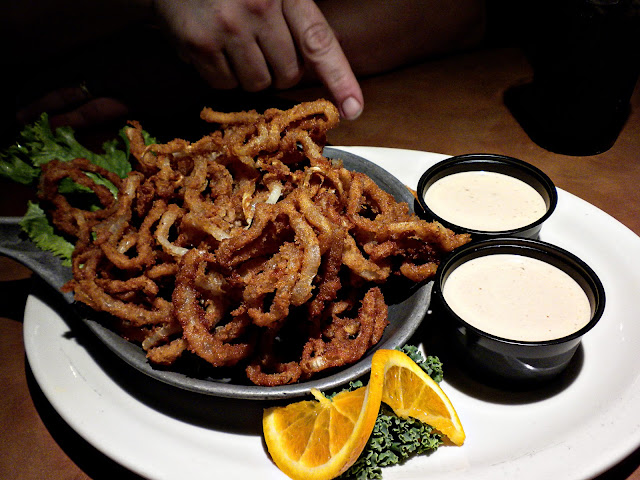 Melon Man had the Jewish sliders for lunch.  They are SO GOOD.  They were recently featured on Man vs. Food.  As much as the guy on the show tried, he just couldn't finish the 12 sliders and onion strings.  I challenged Melon Man to try it, but he said no.  Good thing...he barely finished the 3 he ordered! 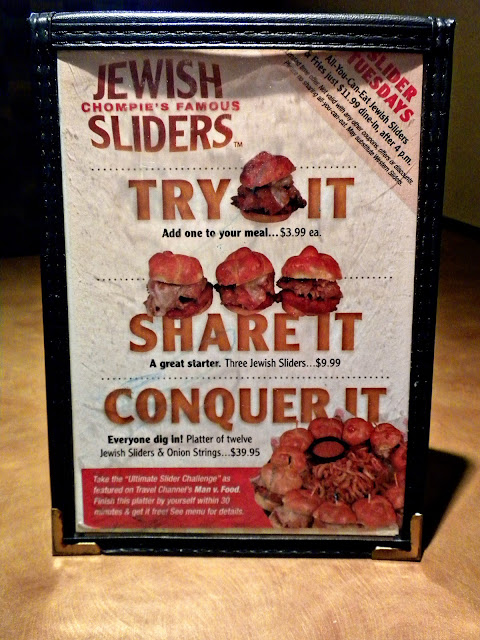 See how good they look?  Brisket on a challah roll, with a latke on top of that, with gravy to dip them in.  Oh...and more onion strings.  Y.U.M. 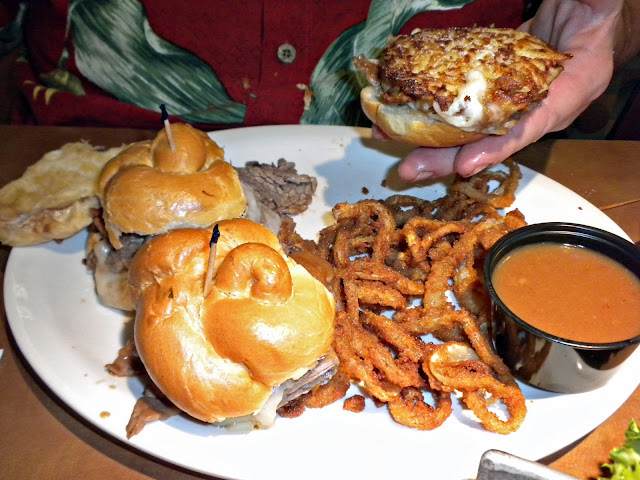 Me...I'm a purist.  I had my regular...hot pastrami on rye with havarti cheese and extra crispy fries.  Y.U.M.  Can't ever go wrong with that!  It was pure heaven. 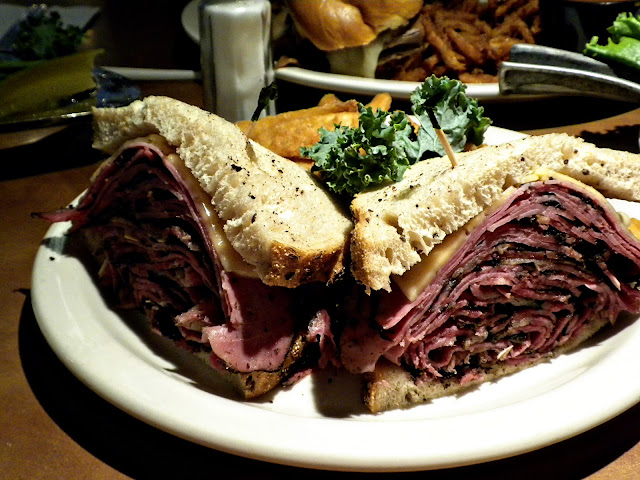 We headed home and lounged the rest of the night.  Who needed to eat dinner after that?  Not us!  What a fun day it was with my Melon Man!