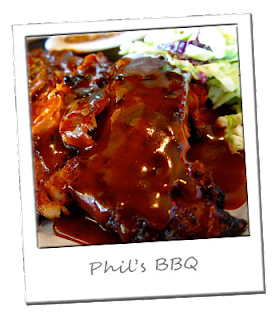 Mmmmmmm.....yum. Phil's barbecued beef ribs. Melon Man and I have seriously been craving Phil's BBQ for such a long time. So much so, that we altered our recent plans to go to Disneyland to include a quick one night stay in San Diego so we could enjoy their awesome ribs for dinner. However, just three days before we were supposed to go, I realized that Phil's is closed on Mondays! How dare they?!?! We ended up just eating at Filippi's instead - and it was yummy as always. But, it still wasn't Phil's. Oh well...next time.

So, a couple of days ago, Melon Man bought two huge packages of beef ribs and today, he barbecued them up today. Melon Man tried making some onion rings too, but they didn't turn out. I stopped at KFC and picked up some coleslaw. A little Phil's Goomba Dust and a big bottle of Phil's BBQ sauce and we had Phil's barbecued beef ribs. Delicious!!!