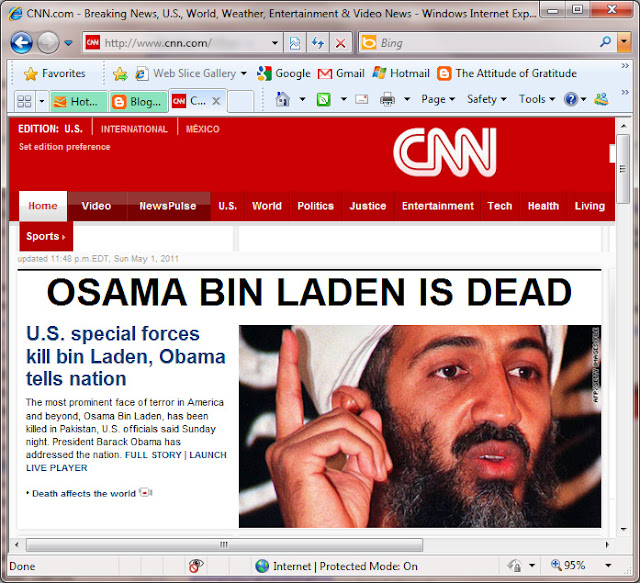 It's a just day.  We just received word that Osama Bin Laden is dead.  Finally.  After 10 years of hunting him down, he's finally gotten his due.  Apparently this has been in the works for a couple of weeks, but just happened a number of hours ago through a very calculated strike.  The U.S. is in possession of his body and they have confirmed that it is, indeed, him.

While this is good news, it is also concerning to me because a few hours ago the terror alert level was raised due to all of this.  I anticipate that we will see another terrorist attack in the next year or two just because of this.  While people around the world are celebrating right now, Bin Laden's people are likely actively plotting some form of retaliation.  And that scares me.  It scares me because I'm sure they've already been working on something "bigger and better" than 9/11.  It's only a matter of time until they put it into play.  This will give them the ammunition to do it sooner, I'm sure.  I hope not.

Hi Kristin! I loved your comment on the Springville blog. Thank you so much for visiting.

I will for sure stop by your old stomping ground and take a picture for you! That would be so fun. I'm pretty much in love with Springville, can you tell?!!