What a waste of time today was.  I missed out on real work time where I could have been accomplishing things that have to get done to be sitting in a class where the teacher is not observing that the students are completely lost and he needs to slow down.  A few people asked questions that tried to get him to go back a few chapters so we all could better understand what he was teaching, but he either didn't want to or he just wanted to finish and be done with us.  He was a horrible teacher.  We were all glad when the class was over.

We left work and went to dinner as a team then headed downtown to Navy Pier for an outing.  Since it was Wednesday, there were fireworks scheduled for Lake Michigan.  We boarded our boat and went out into the harbor boating around for a bit until it was time for the fireworks to start.  They were spectacular.  I had never been so close to fireworks before.  It was unlike anything I'd ever experienced of a similar nature!

I will say, however, that it's hard to take good pictures of fireworks as it is, but it's even harder when you're on a moving boat!  This is a picture of my co-worker here in Phoenix - Dustin.

And then David from Ohio

Me with Maria, also from Ohio

Most of our team - David, Super Fatty Girl, Maria, and Dustin.  Gabriela was taking the picture and I don't know where Scott was...maybe buying our drinks? 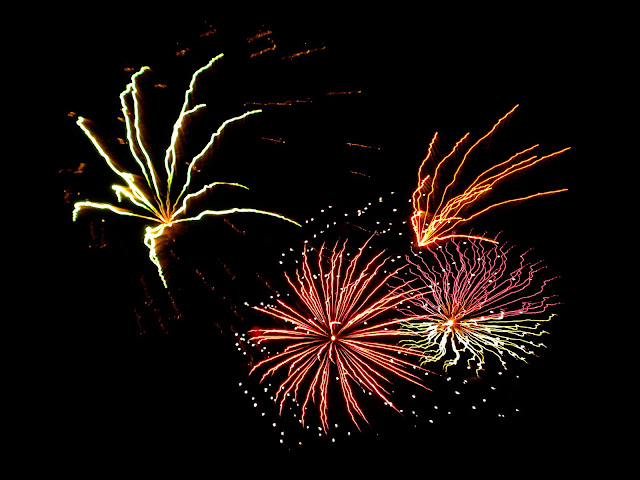