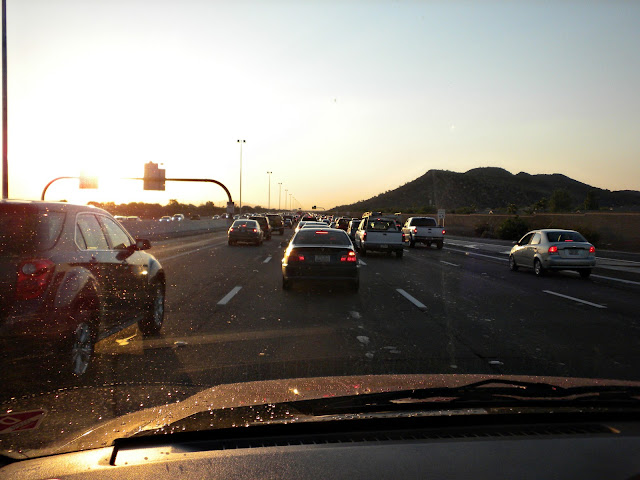 I had to leave around 4:30/5:00 today so I could make it to Mutual on time.  As I got on the freeway, this is what I had to deal with....bumper to bumper traffic (I took this picture a few feet from stopping bumper to bumper so I wouldn't actually hit the person in front of me while taking it.).  It's too bad I could not take the picture quick enough when I was on a higher spot in the road...you'd be able to see just how long this line of traffic is.  It was horrendous...at least 3-5 miles long.

I do not like b-2-b traffic.  I do not like rolling along a 65 miles per hour zone going 15 miles per hour.  I do not like seeing people hauling butt down the carpool lane who either 1) do not have a second passenger in their vehicle, or 2) do not have special plates that allow them to be in the carpool lane without a second passenger.  It irks me.  I guess that people don't care about breaking the law.  Sure...that empty lane over there on the left next to the block wall is empty, but that doesn't give them the right to drive in it and avoid having to sit in the traffic with the rest of us.

So...this is one reason I like working late...no traffic to deal with!