A Day at the Temple with the Young Women

I have not been to the temple to do baptisms for the dead since I was a youth.  I have been looking forward to today for weeks - since I found out our youth baptisms day was coming up.  Satan did his usual tricks of trying to get me to stay home.  He tried to cause a tiff between Melon Man and me.  He even used discouragement to make me feel bad that only 2 of the 7 young women wanted to ride with us.  But...he did not win.

We met at the old stake center and picked up the girls.  We had the opportunity to take Kelsie and Nicole with us.  They are two fairly new Beehive girls...one completely talkative, the other completely quiet.  Fifty miles each way can seem like a really long drive when you have to drag conversation out of girls, but luckily that didn't happen too much.

We made good time and were able to get there before the other ward from our stake, so that meant our ward got to go first, which was REALLY good since we only had 7 girls there and the other ward had about 20!  Sister Jarman and Sister Kapanak were the other leaders that went today and then Melon Man and Brother Wayas were the priesthood leaders that were there with us.

I made sure to take a picture of Kelsie since it was her first time to the temple.  She is very shy and I think she was a little nervous, but I was so happy she came.  I plan on getting this picture framed for her to help her remember this special day. 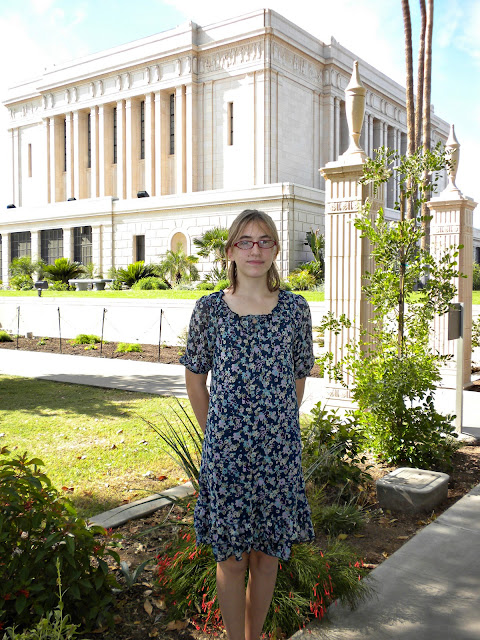 I went into the dressing room to change into my temple dress and one of the temple matrons showed me what my job would be that day.  She had to leave for a second to get an answer to a question and she didn't come back so I went to find out what was going on.  Instead of finding her, one of the men helpers in the baptistry chapel engaged me in conversation that went something like this....

Um...no not really, but okay.  So, I got "roped" into playing the organ in the baptistry chapel.  At first, I wasn't very happy about it because 1) I was caught off guard, 2) I hadn't played in months, 3) I had never played an organ for others, 4) I was nervous to play in front of all the baptistry people and all of the girls and leaders, 5) I was nervous, in general, and 6) I was completely petrified to play the organ in the temple.

I picked a song from the eligible song list - I didn't know they only can play specific hymns from the hymnbook in the temple - and sat down to practice.  Soon, the girls started coming in and sitting down, so I ended up just staying up there playing hymns as the prelude music for the service.

Yes, I made mistakes.  Yes, I was still nervous.  And yes, I did not know how to play the organ.  But, it all worked out.  Why?  Because I was in the Lord's house doing what the Lord had asked of me.  I was there with 2 of my 5 Laurels.  I so missed the other 3 (Samantha, Danika, and Becky) and wished they could have been there with us!  I was there with my sweet husband.  And, I was there serving in the house of the Lord by sharing a talent he had given me (that needs more effort in improving it).  As I was playing one of the songs, I felt a comfort in my heart that I would do fine, but more so, I had a thought come to my mind that I will never forget.  I felt the Spirit tell me that I had been given an opportunity to do something that most people will never get to say they have done - play the organ in the temple.  I thought about that deeply as I continued to play.  Really...how many people can actually say they've played the temple organ?  Not a ton, I'm sure.  I sat there playing and periodically I looked down at our girls sitting on the first two rows.  They had a special light about them.  I was so happy to be there with them in the Lord's house this day.  It made me sad that others of our girls were not able to be there with us for whatever reasons there may have been.  I want so much for all of our girls to draw closer to our Heavenly Father while they are at this age.  It will help them as they go forward in their lives as adults someday.  I wish I had been closer and more faithful when I was their age.  Maybe I wouldn't have gone through some of the things I did.

As part of the service before the baptisms began, the temple president and his wife came and spoke to the girls.  We learned some interesting things.  First, we learned that they make time to talk to EVERY youth group that comes to the temple.  The service is usually scheduled to start at specific times, but they essentially start when the temple president is able to get there from whatever other things he may be involved in at that time.  But, it was awesome to learn that they make that effort with EVERY youth group.  Second, we learned that a few years ago, President Monson decided that all names provided by the temple for baptism are only permitted to be worked by the youth - that they are held especially for them.  Families can bring their own names and do those baptisms, but generally provided names can only be done by the youth - all over the world it is this way.  How awesome!

After we were finished, we paused outside for a couple of pictures of the girls.  They took a pretty one, then they decided to do a crazy picture as well...silly young girls!  From left to right are Savannah, Katelyn, Haylei, Ashley, Madison, Nicole, and Kelsie. 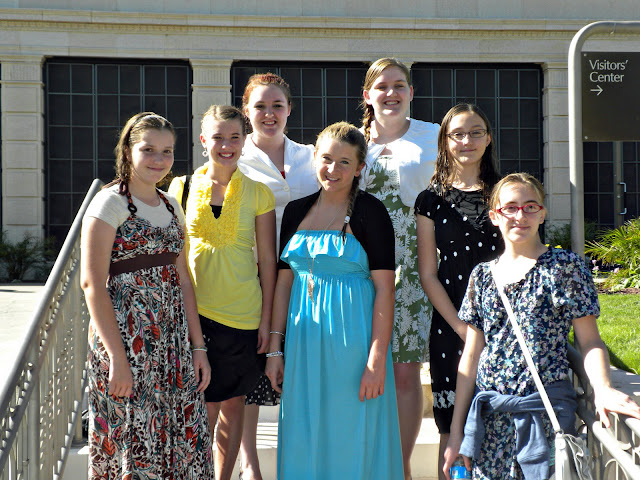 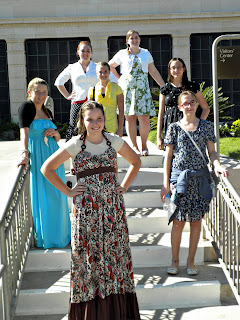 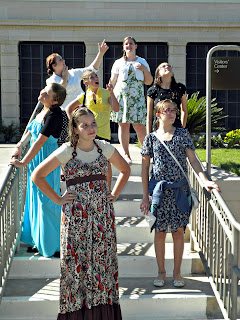 Afterward, we went to Nielson's Frozen Custard for lunch.  It was expensive, you didn't get much for what you paid, and it wasn't all that good, but it was a good time together anyway.  We headed home and dropped Kelsie and Nicole off at their homes, then we went home so I could work on the program and my lesson for tomorrow.

As I was working on the program and my lesson, I decided to log on to the Personal Progress website and see what the girls were going through to get their Personal Progress awards.  As leaders, we are also able to participate in the program, so I decided to start on the Faith value, experience #1.  I had to read a number of scriptures about faith, which I completed.  Then, I had to journal about that experience, which I completed.  Now, I still have to read two conference talks on faith, journal about those, and build a habit of saying morning prayers (I'm bad at that, but have the evening ones down) while also journaling about it.  At first, I didn't think I would want to do the Personal Progress program as a leader, but I feel now that it will help me draw closer to our girls as well as to my Heavenly Father.  I look forward to working through each of the value experiences!

We later went to Firebirds for dinner and had yummy steaks.  It was a great day!

What a special experience you had!

I remember doing baptisms for the dead when I was that age. We were able to experience it at the Los Angeles Temple. Although I was petrified of the water there was a calming experience while there.

You had a special calling that day!