Well...it's begun!  I started working on our new Scrapboffice this weekend - after another trip to Ikea on Saturday.  Friday night I started thinking about the countertops and realized that I'd miscalculated something and gotten too short of a piece of countertop.  Crap.  I thought I was going to have to take back a short piece and just get a longer one, but then after some recalculations, I realized I needed a whole additional piece.  Drat.  Oh well.  I also realized that by missing that piece, I now needed one additional lower drawer cabinet.  So, after a quick breakfast at the Coral, off we went again to Ikea.

We knew right where to go this time so in we went, grabbed the goods, paid, loaded, and were on our way home.  Melon Man helped by moving a lot of the stuff from the Scrapbook Room into the office, got the farmhouse table legs off the table so we could get it out of the room (we gave it to Derek and Bria), and then went to bed.  I don't blame him - if I were a husband/guy too, I would have done the same thing.  Don't get in the way when a woman is doing something like this.  Just nod, say yes, and help by hauling/moving stuff.  Keeps her happy, keeps him happy, and all is well with the world.

So, at that point, I went into the room and took everything off the "monster."  Remember this picture?  That's the monster - all 208 pounds of it - when EMPTY. 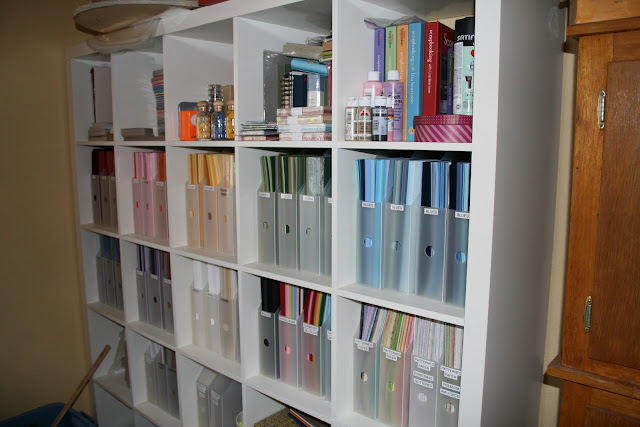 After I took everything off of it, I moved it to the other side of the room into its new home - all by myself.  It was truly HEAVY.  But, I did it.  Then, I began the daunting task of putting everything back on it!  Yeah, not fun.  Sure, I know how to do rainbow order again for the cardstock, but everything else?  Yeah, didn't remember how it was originally, didn't like how it was originally, and wanted to make it better.  So, I spent time reorganizing it...fully knowing that once all the drawers are in the room, this surely could change again!

Here are pictures of how the room went down today...
Next up...relocating the tilt bins from the current wall to the wall just to the right of the monster - yes, I plan on moving them just about 2 to 3 feet from where they are currently.  I know...lame-o.  But, that's just the way it has to be to make everything work out right.