This morning we had a bit more of a plan of things we wanted needed to do.  Good hubby, Melon Man, hauled me around San Diego county doing testing for work.  We probably drove a total of 60 miles or so going from this place to that so I could test a few machines.  Although it wasn't the ideal thing to do while we were on Bay-cation, it was nice to get out of our normal San Diego routine and go see some other places.  As we were heading back through La Jolla, we got to come down the 5 freeway right past the San Diego temple.  It would have been so cool to see it at night, all lit up, but it was still strikingly beautiful during the day too.  We knew it was coming up soon, but there is still nothing as heart-gasping as when you crest that one little hill and then all of a sudden, there it is!  Since we were driving and I wasn't quite ready with the camera, I found a beautiful picture taken by Steve Thomas to include here.
After we were done with testing, we went to Ocean Beach and went to Hodad's for lunch.  I'd heard about Hodad's previously and how the burgers are so awesome that people will stand in line for 2 hours for them.  When we went to San Diego 2 years ago, we never got there to eat.  We did drive by it and there was a line, but neither of us felt like standing in line so we didn't stop.  Plus, there was no parking nearby.  Today, however, was different.  We found a parking spot on the opposite side of the street and down just about 100 feet ... and ... there were only a couple people in line.  We could handle that!  So, we parked, crossed the street, and by the time we got there, there was no line!  We were seated after about a minute or two.  The place is a tiny hole in the wall, with wall-to-wall people, and there are license plates all over the walls, along with surf boards and other cool beach stuff. 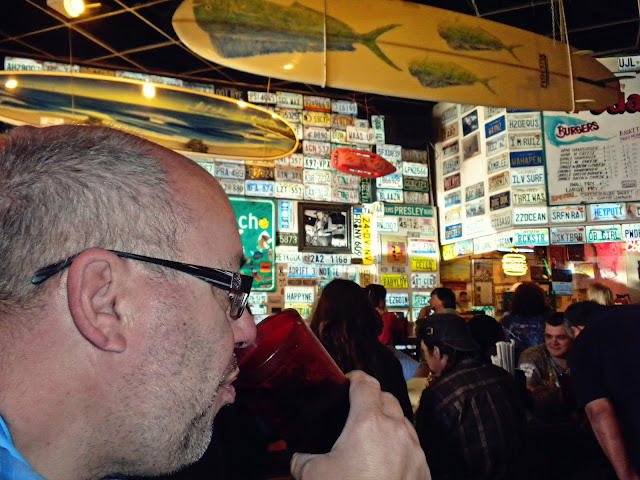 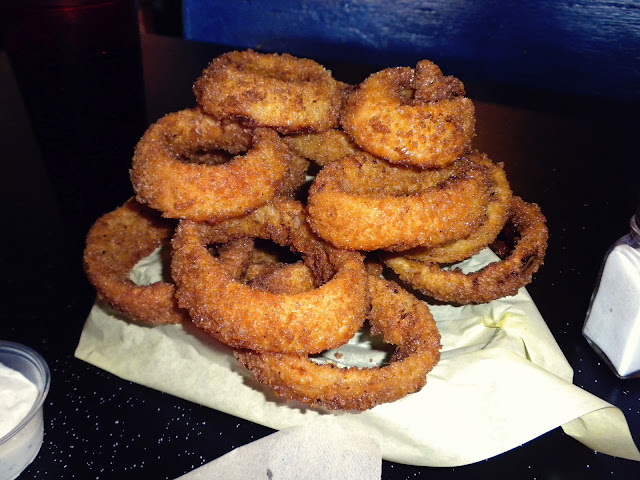 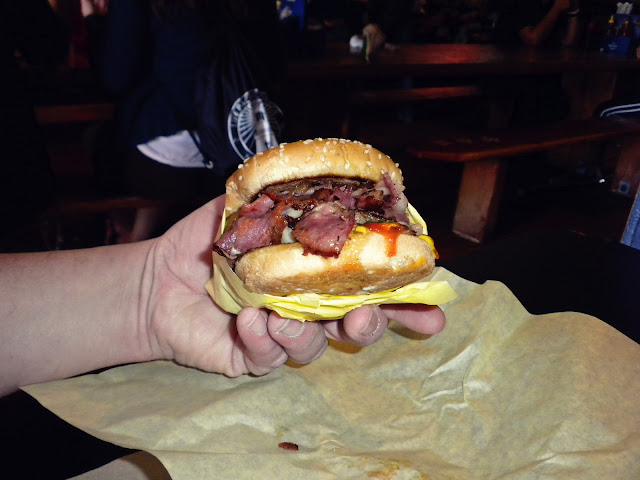 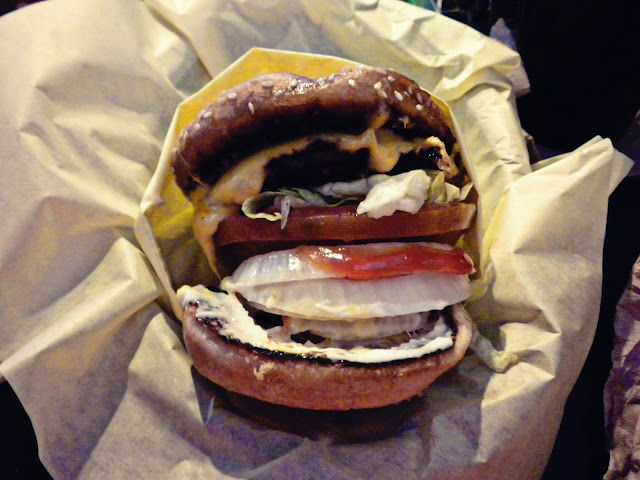 The center table is shaped like a giant surf board with benches down both sides, while one of the booths is the front part of a 1966 VW Microbus. The menu is very simple - singles, doubles, and triples, along with a few other things like Guido burgers - burgers with pastrami and such.  We ordered a plate of onion rings and Melon Man got the Guido burger, while I just got a single burger - which I was glad I did, because it was a mouthful!  They are really well known for the bacon on their burgers, but since I don't care for bacon most of the time, I passed on that.  The burger was fantastic.  It was unlike any other burger I've ever had.  It tasted like it was cooked over open flame, which I think it was, but, the bun, looked and tasted like it had been grilled with butter or something because it was crispy on the inside - in a moist way, not like a dry toasting.  The onion slices were thick and good.  Dang...my mouth is drooling just thinking about it!  This is one place we will definitely be coming back to the next time we are in SD!

After lunch, we headed back to the hotel.  Melon Man napped and I worked (long story, not worth sharing).  Let's just say...I wasn't thrilled I had to and then I was even more upset when I lost everything I'd just spent 2 hours writing - from memory, no less - because the connection timed out.  By then, it was time to wake up Melon Man so we could get ready to head downtown for our belated Anniversary dinner celebration at Ruth's Chris Steakhouse overlooking the water.

We got there pretty quick and were about 15 minutes early.  When I had made the reservation, I specifically requested a quiet spot on the patio.  I don't think they thought we would really want to sit out there since it was windy and overly cool, but I really did want privacy and quiet.  So, they made it happen for us.  The only problem was though that it got REALLY cool and I was shivering, even with the outdoor heater right above me.  If it hadn't been windy, I probably would have been okay.

Our food was really good - oh, except that Melon Man got my steak and I got his.  I like mine medium rare and he likes his medium.  Oh well.  Melon Man had a shrimp cocktail with 4 of the largest shrimp I've ever seen (even though they don't look that big in the picture) and I had a tomato, onion, blue cheese "salad". 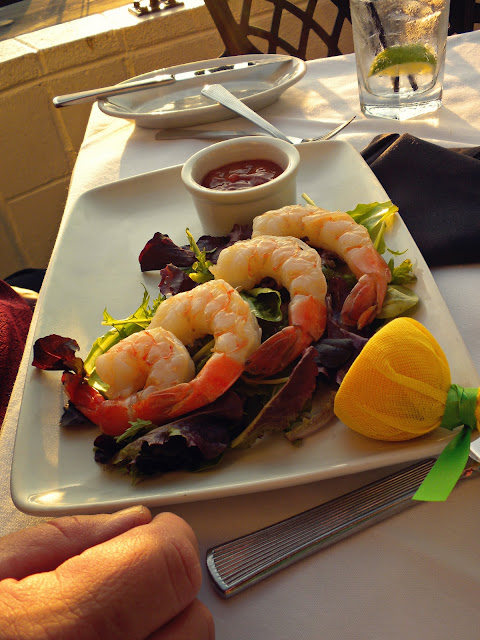 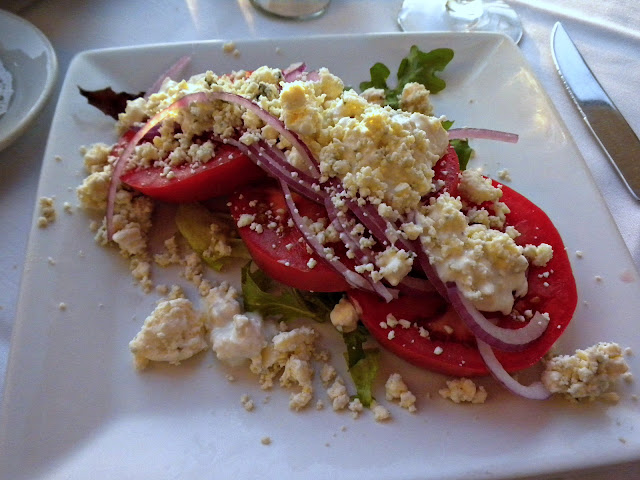 Then, we both had steaks, some broccoli, and au gratin potatoes. 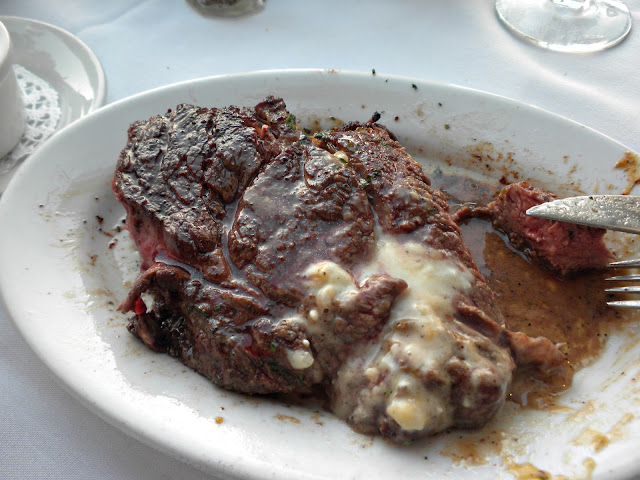 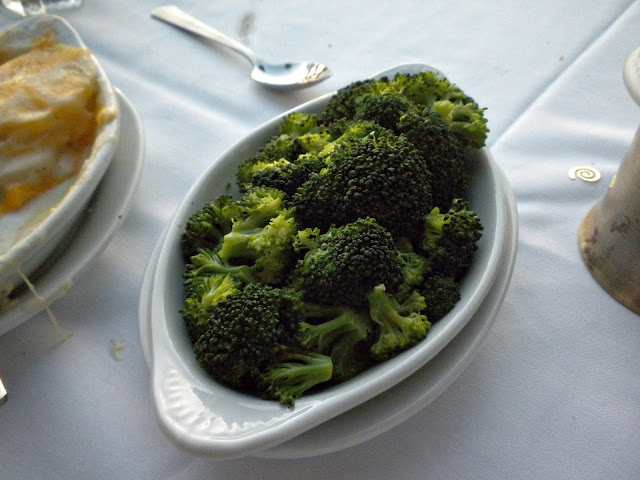 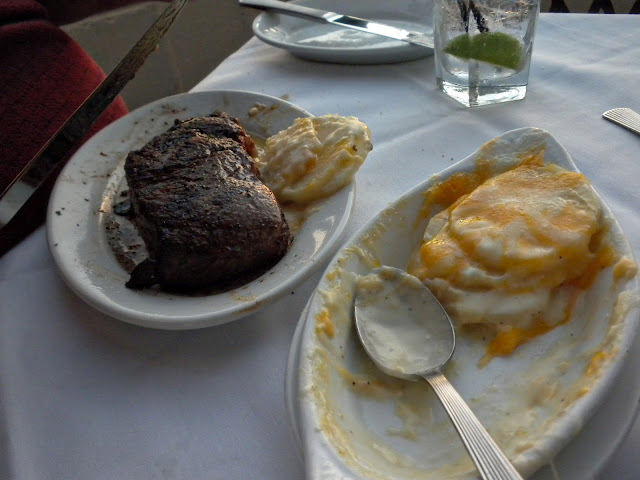 Then, they brought us a piece of chocolate cake with Happy Anniversary written on the plate. 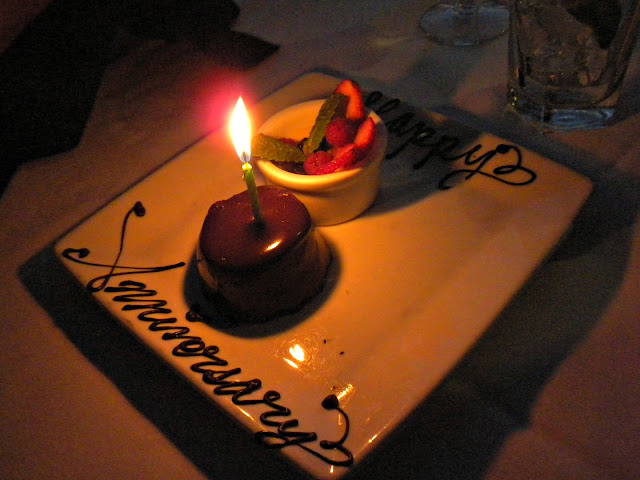 We watched the sun set for as long as we could before it disappeared behind Point Loma.  We had a nice time talking and just being with each other. 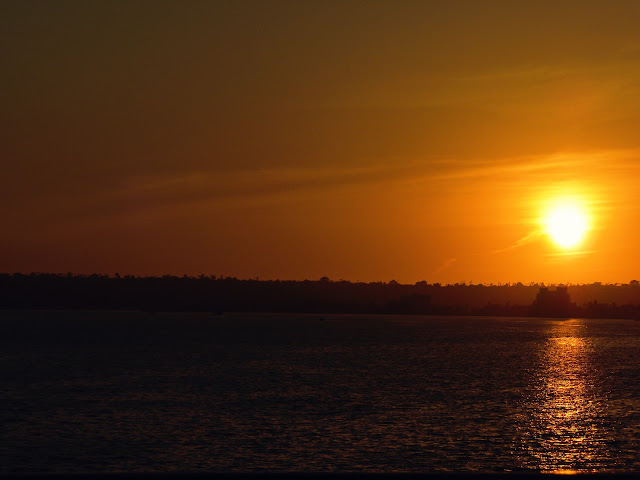 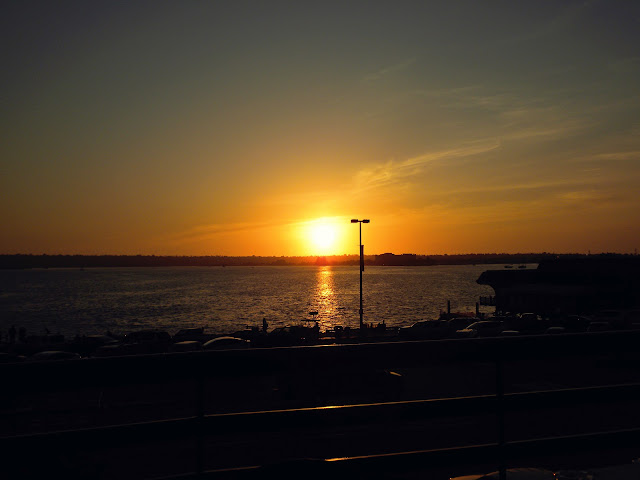 Once we got back to the hotel, I re-did the work that I'd lost and then we snuggled and went to sleep.  Our time in la-la land is almost over...  :(