Left yesterday for a quick trip out to Los Angeles for work.  I decided to drive this time.  It was nice to have some alone time and just think and what not.  I left yesterday morning at 5 a.m.  About 6 a.m., the sun started peeking in through my back window... 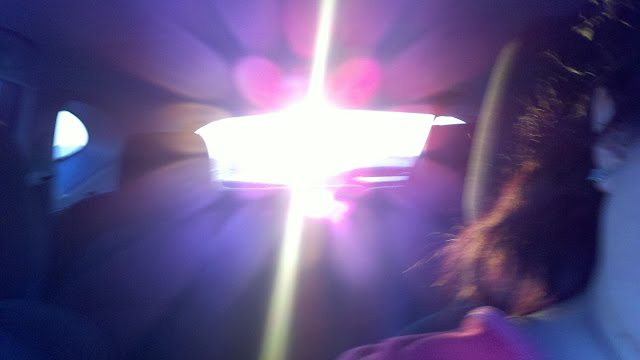 I have no idea how the camera only caught the purple, but it's kind of neat.  I tried taking a few more.  Do you know how hard it is to get the picture just right when you're going 75 miles per hour and you're the only one in the car and you're trying to take a picture of something behind you and get it just right?  Yeah, it's hard. 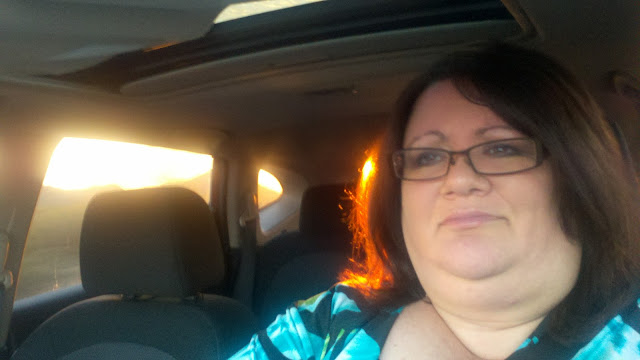 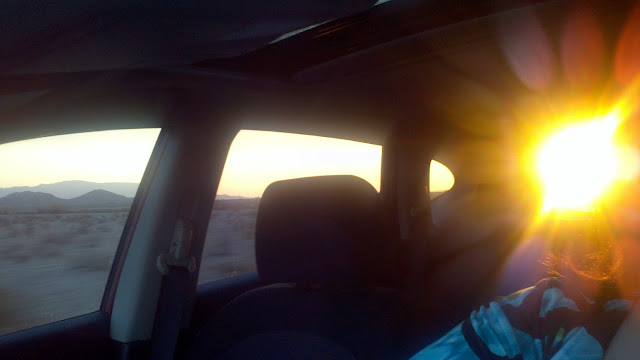 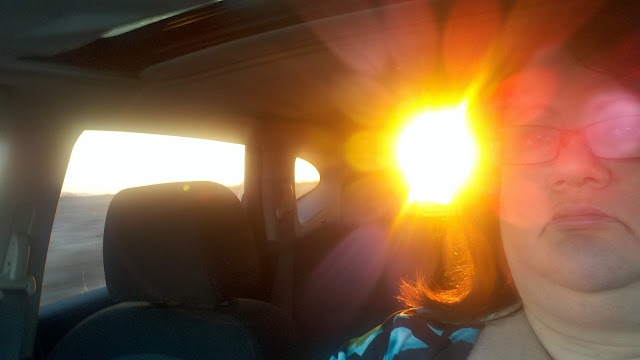 I think this picture below was as I was coming into Quartzsite. 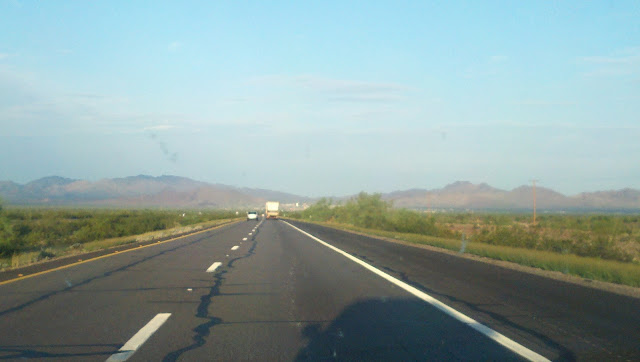 Yeah, must have been, because this next picture is after I left Quartzsite.  It was about 7 a.m. and I was supposed to be on a conference call for work (yay for Bluetooth!).  I tried...but it was going on just as I was going through this little mountainous area and I kept dropping the call.  So, finally, I just gave up. 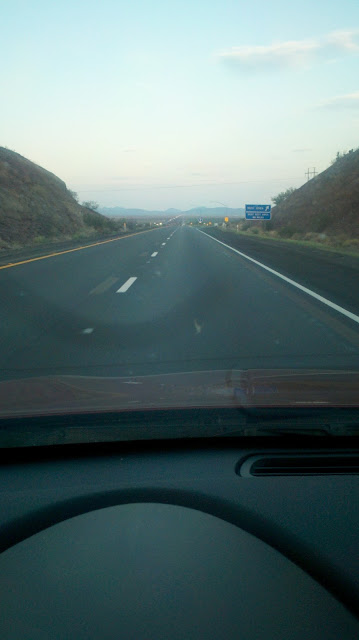 This is as I was coming into Indio. 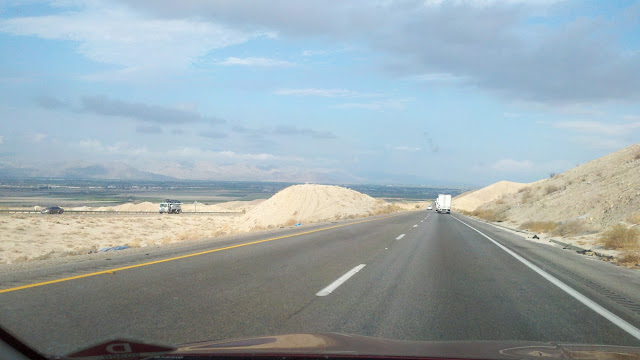 Then, of course, as I was coming into Palm Springs and saw the windmills.  Can't drive through the windmills and not take a picture...or two...or more. 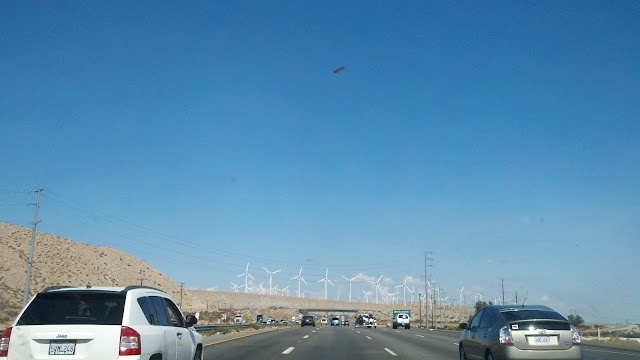 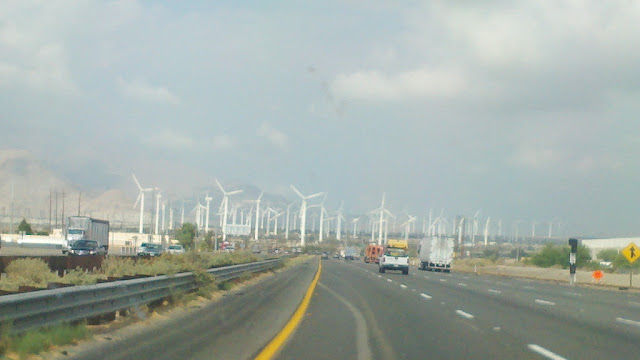 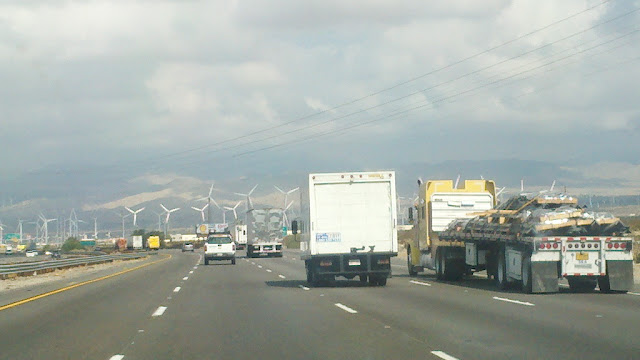 Then, I finally started coming into "town."  The traffic started getting more congested.  I had only had about 3 hours of sleep the night before so I was kind of nervous about the drive and possibly falling asleep.  I thought for sure that once I hit "L.A." traffic, my adrenaline would rush some and I wouldn't have a problem.  Yeah...not so much.  See, the traffic has to be nerve-wracking to make your adrenaline increase.  Going 10 miles an hour doesn't cut it.  I started falling asleep sitting there.  Not good.  But, I finally woke up enough that I got through it. 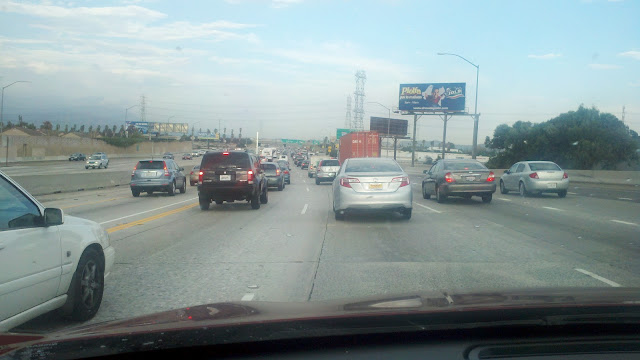 Soon, I was in downtown Los Angeles.  It was gross.  Dirty.  Gang stuff everywhere.  The freeways are run down - bad.  I finally got to my exit and made my way to the 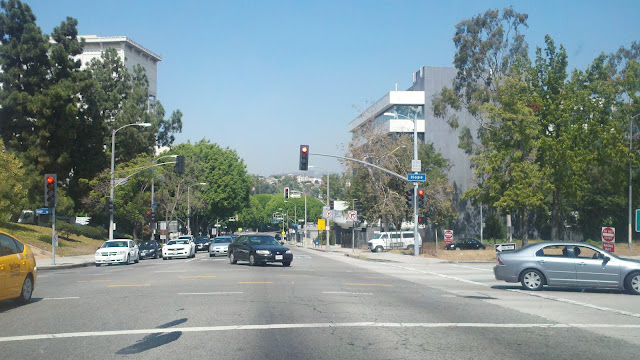 So this picture above...when I got home and downloaded this pics, I couldn't, for the life of me, figure out why I took this picture.  Unfortunately, because I'd forgotten my camera, I had to use my crappy cell phone and of course, it doesn't take very good pics, so it was hard to tell from the picture what I was trying to capture.  But, just as I was about to hit delete to erase the picture, it came to me.  If you click on the picture, hopefully it will blow it up to full size in a new window.  But, if not, here's why I took the picture: 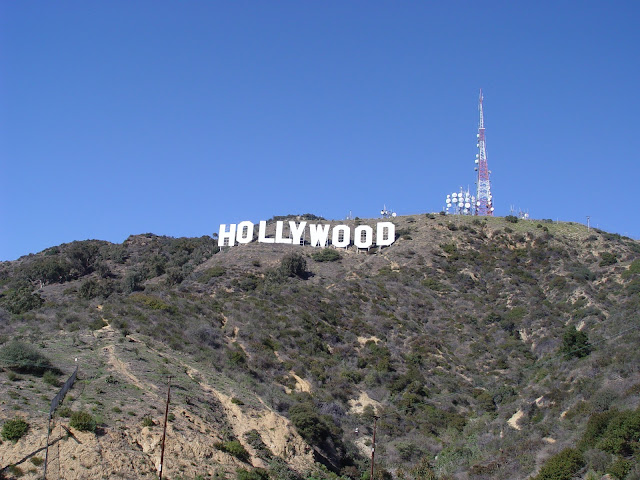 Yep, just under the street light, behind the stop light (in my picture), you can see the Hollywood sign.  That is only the second time ever in my life that I've seen it, so I had to take a picture!  It was really far away, and I almost missed even seeing it, but I'm glad I didn't.

I motored on down to the next light or two and went to the Vital Records building, where I drove around and around for 20+ minutes looking for a parking spot.  When I still could not find one, I gave up and paid the eight bucks to park in the parking structure.  Yeah, should have just done that to begin with, but oh well. I was in and out in 15 minutes and now have 2 certified copies of my birth certificate.  Passport time!

After that, I went and got some lunch and then went to my client's office.  We had a nice meeting and then we were out of there.  We headed 17 miles to the east and it took one hour and 25 minutes.  Yes, you read that right...one hour and 25 minutes!  Seriously!  I could not handle that every day!  I complain sometimes because I have to drive 22 miles and it can take 50 minutes.  That's only about 2 minutes per mile.  This was 5 minutes per mile.  That is 12 miles per hour average speed.  RIDICULOUS!

I finally got to my hotel in Baldwin Park and had to call Dad and ask him where we lived when Jennifer was born.  He said Westchester.  I asked him why on earth we had to drive all the way to Baldwin Park to a hospital.  Really, back 40 years ago, I'm sure the traffic wasn't like it is now and it probably didn't take them an hour and a half to get there, but it sure does now!

My peers that also came to the meeting from Pennsylvania and Chicago also were there and we all got checked in and then headed to a Mexican restaurant for dinner.  Since we had come out to L.A. to visit a Korean client, I really had wanted to go for Korean food, but Bob and Andrew had already done that for lunch for Mexican for dinner, it was.  I had this chicken pot for dinner.  It was alright.  Not great, but okay. 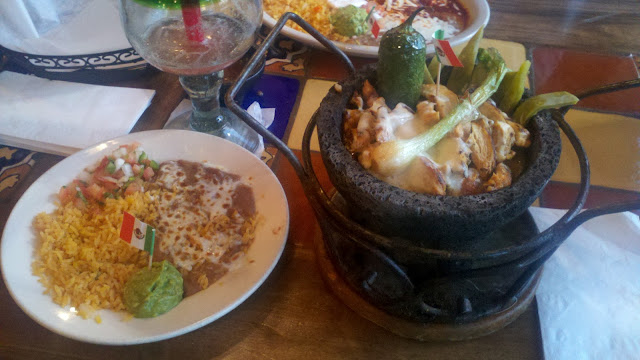 We listened to the Mariachi band for a while, but it finally got too loud and late so we all decided to head back to the hotel.

In the morning, I headed out and did some secret shopping for work along the way.  As I was driving home, I soon came upon this area of town and just had to take a picture of the exit sign.  Again, due to crappy cell phone camera, you can't really tell what it says because I was still too far away.  But, it says "Bloomington" which is my friend, Shelli's, hometown.  I was going to send the picture to her and let her know I was thinking of her, but I didn't have her new phone number programmed into my phone - just the old one still.  Guess I need to update that! 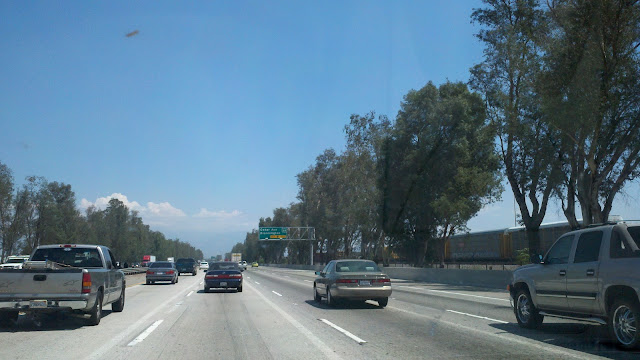 What would normally have taken me about 5.5 hours to get home, ended up taking me 8 hours because of the secret shopping.  I got home just as Melon Man was getting up for work.  Good timing, I guess, although I wish I would have gotten home sooner.  Just glad to be home safe and sound.