Today we went to the Mesa, Arizona temple with the Vests for their sealing. We got there about half an hour early and as I was going to the dressing room to store my shoes, I saw Candace in one of the side rooms. I softly called to her to say hi and all of a sudden she's like, "There she is!"  I wondered why I was being identified and soon I was whisked into the room to be her escort.  (Melon Man was in the chapel with two other families from the ward who were there to support them and they all started to wonder where I was when I didn't come back!)

I was really happy to be her escort.  We have gotten to know each other quite a bit over the last year and a half and we had a fun time together at Girls Camp.  Secretly, for weeks as I've known they were close to being able to go, I have hoped she would ask me.  But as the day drew near, she hadn't asked, and I was okay with that.  I figured there was someone else that was closer to her that would fill that position.  But, once I got by her side, I found out she hadn't asked me because she didn't know she needed one!  Since I had never been an escort before, I wasn't quite sure what my role was, but the temple workers told me what to do and I was all over it.  It was such a special experience helping her.  It was especially touching during the ceremony when their daughter Ashley was brought in to be sealed to them.  She is one of my Laurels and is a good girl.  It was so wonderful seeing her all dressed in white and to see them sealed for eternity as a family.

Afterward, we took them to Serrano's for lunch.  The food wasn't as good as when Lisa and I went a while back, which was disappointing.  But, it was lovely spending time with them after such a wonderful experience.

What a great way to spend the Saturday after Thanksgiving rather than fighting the crowds and such! 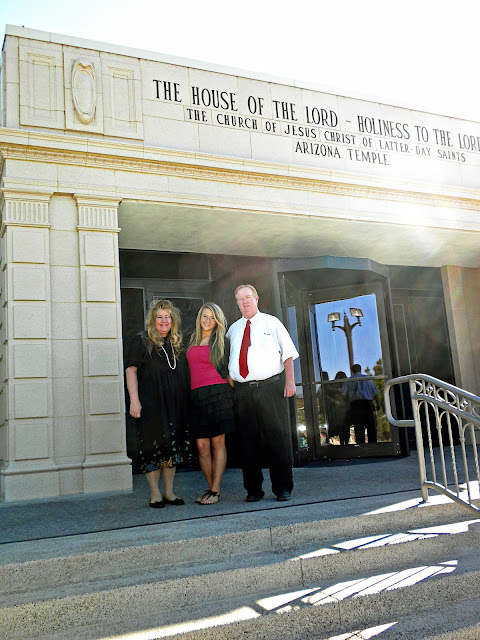