Today started off with Melon Man coming home from work about an hour early - which I was glad for so he could get some rest.  Yesterday, while we were having breakfast, he announced that he was going to go to Lisa's for Thanksgiving.  That made me happy.  I knew what a sacrifice it would be for him because he was supposed to work until 7 a.m. today, then be back at work at 6 p.m.  It has made me pretty upset and sad that once again, he wouldn't be able to join us for a holiday because of the big and powerful Wallyland trying to make more of the almighty dollar and people's greed to get things before others.  So, for him to be willing to only sleep about 5 hours and then work all night again, just so he could be with all of us for dinner really touched my heart.

While he slept this morning, I made my brussel sprouts (my vegetarian contribution to the meal - recipe to follow in a separate post) and cucumber salad.  I made my Cranberry Pecan Pineapple Apple Salad last night, so it was all ready to go.  We ended up heading out around 12:45/1:00 and things did not start off very smoothly.  Melon Man left a few minutes ahead of me since he needed to stop and get gas.  I looked for him at both gas stations near our house and didn't see him at either one.  I figured I had just been super slow leaving since as I was leaving, I saw a strange truck parked across and down the street aimed toward our house and there was a guy just sitting in it talking on a phone which made me very nervous.  I waited until I saw him actually go into a house and then I left.  I decided to call the family at Jen's and wish them all Happy Turkey Day.  As I was talking with Dad, Melon Man called me and a not-so-fun discussion ensued about why the new credit card we'd just received wasn't working.  My heart sank.  Seriously?  What now?  He told me he was at his third gas station and it wouldn't work at any of them.  It hit me...our credit card company uses a pro-active fraud monitoring tool that looks for suspicious activity and blocks the card until it can confirm the charges with the cardmember.  I told him I would call and find out if that was what was happening - while I was driving.  So, that's what I did - and that's exactly what had happened.  Here we'd just had fraud on our card earlier in the week, then we had a new account set up, new cards overnighted to us, then I had made a large purchase on the card early this morning, and now he was trying to buy gas at an automated gas terminal.  All very suspicious and patternistic of a stolen replacement card.  So, I got things cleared up with the credit card and all was well in the world of Melon Man and Gout Girl again.

We both arrived at Lisa's and visited with her and Craig for a bit.  Dave arrived a bit later, then her mom and dad.  We ate at 3:30 p.m. and the dinner was lovely.  She had graciously made some adjustments to her meal so I could eat more than just brussel sprouts and potatoes and I was very grateful.  I DID "indulge" in a VERY small piece of turkey - the first meat I've had in almost 3 months - and it was divine.  It was moist and tender and oh, so flavorful.  She brined the turkey just like Linda did last year, then roasted it in her Nesco roaster and it was fantastic.  I actually debated all morning as to whether or not I would give in and have a piece.  I'd been so good for 3 months - I didn't want to "lose control" and fall off the vegetarian bandwagon. Even up until the moment I was putting food on my plate, I was still debating if I would eat it or not.  I finally decided that I would partake of a very small amount of turkey as this was a special occasion, I was not eating any other proteins that I shouldn't/couldn't, I wasn't doing this for ethical treatment of animals reasons, and the doctor had said I COULD have up to 3 ounces of poultry a day, if I felt like it.  So, I did.  I think I probably had between 2 and 3 ounces.  It wasn't a lot.  Just enough to make me appreciate it, enjoy it, and reward myself for having been so good.  I really did want more, but I stuck to my guns.

We sat and visited, Skyped with Linda since she was back east with her kids, I did some vinyl on tiles for Lisa for her bosses' Christmas presents, some friends from Lisa's ward showed up so we all visited, and then I headed home about 9 p.m. or so.  These are a few pictures from the day that Lisa took:


It was a really lovely, relaxing day.  It was so nice to be able to be with family and friends (even if it wasn't able to be our own immediate families) and to give thanks for all that we have been given.  I'm grateful that I was able to have Melon Man with me today.  I'm grateful for so many things, especially lately, that it's just really hard to pick a couple to name, so I'm going to just leave it at ... I'm just very grateful.

One last thing I'm grateful for...the progress being made on our new temple... 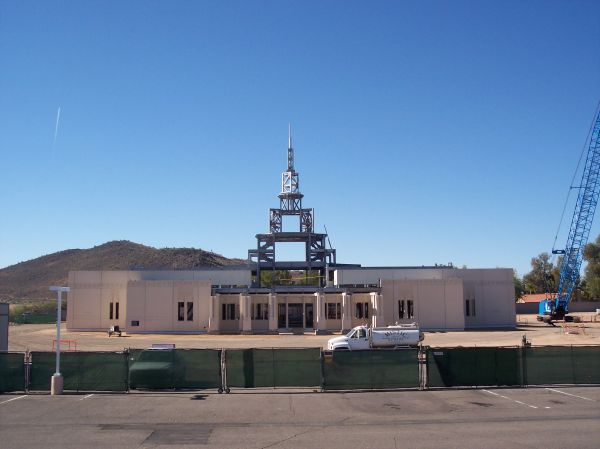 I bet that by the middle of December, the entire outside will be done!  Then, it will be the inside and the landscaping to be finished.  Oh, I can barely wait!!  No more long drives to Mesa...although, I am super happy that I get to make that drive this weekend to go to the sealing for a very dear friend of mine!