I've been thinking about doing this for a while now, but just like scrapbooking, I thought it was kind of lame for a while. But now I see the good that can come from blogging - the ability to keep in touch with others, the ability to get my feelings out there whether it helps someone else or just myself, and the ability to share those things that I am grateful for.

Just this past weekend, an apostle of the Lord, President Henry B. Eyring, spoke of how since he was a young father, he kept a journal everyday of how he had seen the hand of God blessing his family. He wrote down a few lines everyday no matter how tired he was or how early he had to rise the next morning. As he would think about what to write each day, he would ponder this question:

Have I seen the hand of God reaching out to touch us, or our children, or our family today? 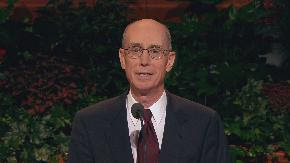 I was so touched by this man's 1) commitment - he has never missed one day since he started probably more than 40 years ago, 2) sincerity - he truly cared about his family and what influence God and the Savior have in their lives, and 3) spirituality - I can tell he is close to our Heavenly Father.

As I've thought about this blogging idea a lot lately, and then hearing President Eyring's talk, I thought to myself that maybe this is one way for me to see the positive and good in my life through the touch of God's hand in my life, but to also be able to keep a journal in this modern era of technology, and to be able to share the good of God with others.

So, here goes. I can't promise that I'll do it everyday, but I certainly want to try. At first it may be hard as I've never blogged before and I'm still learning to work this program, but I'll put my best effort out there.

Thanks to Angie for sending me her new blog - I think it was the final way of Heavenly Father saying - Okay, here's the tool, just do it.

So, the most incredible things have been happening in our life lately. Recently, we decided to buy a travel trailer. We were so excited when we left the dealership! We couldn't wait to pick it up a few days later. Everything had gone well. We were happy with our purchase. We knew we hadn't bought something too extravagant. And, we knew we could afford it. The next morning though, the phone rang at 6:30 a.m. on a Saturday morning. It was Clint. He told me to call and cancel the trailer. I was devastated. He had been off the day before so he hadn't heard the "great" news his work shared with him when he went in the next day - his company was merging with another hospital. He most likely would not have a job in a year.

Although I was deeply saddened by the prospect of not getting the trailer after all, I saw that God had helped us by allowing us the opportunity to cancel the trailer without penalty. Sure, there were other ways we could have continued to pay for it or bought it outright, but the Holy Ghost kept bearing witness to me that those other ways were not following the prompting to not get into this debt. Although we could have pulled equity out of our house to pay for it, that would have only increased our house payment in the end and we didn't want to do that. So, we followed the prompting and cancelled the trailer. We feel good about following the promptings we received and know that we will be blessed for doing so. Sure, we're still wanting the trailer, but it never was a necessity and once God shows us what he has in store for us, we'll get it if it's the right thing to do. For now though...our little tent trailer will have to suffice...and that's good enough for us.

Very nice Kristin! I have a blog too. I started it about a month ago as a way to journal because I'm so bad at it otherwise and for a way to keep my family connected now that we are all over the place. In one day, you've done what it's taken me a month to learn! You'll be a pro at this in no time. I may call you for help!
Clicked on Angie's site and you have to be invited to read it so I couldn't get on. Now we need to get Lisa to do this!

Hope all is well.