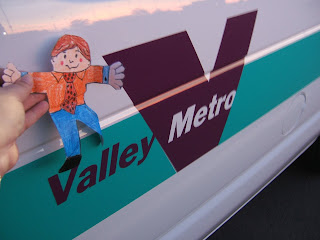 I even decided to bring Flat Stanley along for his first ride in the vanpool and to spend the day with me at work! As you can see, he was very happy to be helping save some money on gas and to be riding in the van. He made sure to wear his seatbelt and everything! 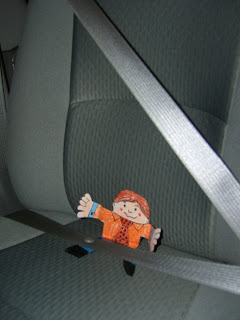 As we got started down the road, I was enjoying driving and the morning was still lovely although the heat is really starting to come in. As we approached the intersection that scares me to death - 91st Ave and Bell Rd - I watched the crosswalk light change from walk to blinking hand. Oh no. This is what I fear so much. Did I have enough time and room to stop this big vehicle or would someone crash into us? Did I have enough time to proceed through the intersection without the light turning red?

I quickly evaluated everything - distance, passenger safety, van safety, timing, speed, everything! It made the most sense to proceed through the intersection rather than risk someone slamming into the back end and possibly hurting a lot of people. I looked up at the light as I went under it and it was still yellow. Oh good. But, then, all of a sudden, I saw the cameras flashing. Dang! Was it me that just got a ticket or was it the car beside or after me? I quickly looked in all my mirrors and around me. I didn't see anyone behind me (not that I could very well anyway - that was part of my decision in the first place). I only saw a car to the left of me. I realized that I had sped up to get through the intersection before the light changed. Did I speed up too much that I now was going to get a speeding ticket instead of a red light running ticket? I don't know. I HATE THIS INTERSECTION! I think I said that yesterday too. I seriously didn't even want to have to drive home today! Well, it will be a while before I find out if I got a ticket...it has to go to the van company first, then to work, then to me. I truly feel that I made the best decision at that instant. I hope that if I do get a ticket, that the judge will understand and I will not have to pay it. I really took all things into consideration in that split second or two.

On another note, Flat Stanley had a nice time at my work. He spent the whole day either in meetings or visiting with Tina or working on spreadsheets on the computer. He had a nice talk with the duck too. He was really happy to get home though because this morning's ride was a little scary with the possibility of a $241 ticket plus he was really tired from getting up at 3:45 in the morning! 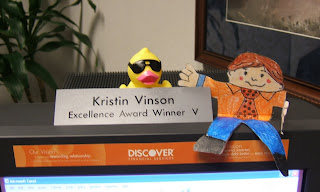 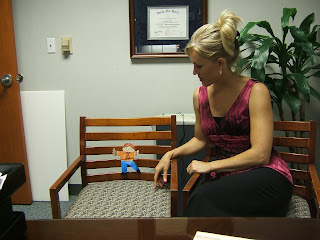