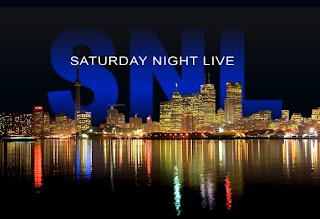 So, "the" Sarah Palin is going to be on Saturday Night Live this weekend...yay!! I can't wait to see how she either 1) makes fun of Tina Fey making fun of her or 2) how she just makes fun of Tina Fey, or 3) how she makes fun of herself. Should be hilarious! I'm sure I'll be sound asleep by then though so I'll just have to DVR it. I haven't watched SNL for years because it's gotten 1) lame and 2) raunchy. But this certainly promises to be funny so I'll have to check it out. 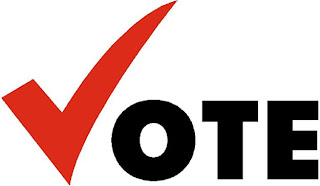 Got my absentee/early ballot in the mail today. Just realized in my Senior Staff meeting on Monday that I will not be here on election day to vote (I'll be in Chicago), so I went online and requested my official ballot. I will have C drop it off for me when he goes to vote that day. I just don't trust that my very important (although probably worthless) ballot will make it there.

I am so afraid that Barack Obama (what a crappy name for a US President!) will be elected. I fear for our country's SAFETY if he becomes president. I have this very disheartening feeling that he is the devil in sheep's clothing. If you look at his past, he has been involved with characters of ill repute. Who's to say that once he gets in the White House that he won't bring in some of his "friends" and they will "unlock" our country to those who want to hurt us? Take a look at this email that I received:

This is well worth reading. You can confirm the authenticity by googling the references. To all my friends, this is long, but very important, please take the time to read it.

This election has me very worried! So many things to consider. About a year ago I would have voted for Obama. I have changed my mind three times since then. I watch all the news channels, jumping from one to another. I must say this drives my husband crazy. But, I feel if you view MSNBC, CNN, and Fox News, you might get some middle ground to work with.

About six months ago, I started thinking "where did the money come from for Obama?" I have four daughters who went to college, and we were middle class, and money was tight. We (including my girls) worked hard and there were lots of student loans.

I started looking into Obama's life. Around 1979 Obama started college at Occidental in California. He is very open about his two years at Occidental, he tried all kinds of drugs and was wasting his time but, even though he had a brilliant mind, did not apply himself to his studies. "Barry" (that was the name he used all his life) during this time had two roommates, Muhammad Hasan Chandoo and Wahid Hamid, both from Pakistan.

During the summer of 1981, after his second year in college, he made a "round the world" trip, stopping to see his mother in Indonesia, next Hyderabad in India, three weeks in Karachi, Pakistan where he stayed with his roommate's family, then off to Africa to visit his father's family. My question: Where did he get the money for this trip? Nether I, nor any one of my children would have had money for a trip like this when they were in college.

When he came back he started school at Columbia University in New York. It is at this time he wants everyone to call him Barack - not Barry. Do you know what the tuition is at Columbia? It's not cheap to say the least! Where did he get money for tuition? Student Loans? Maybe.

After Columbia, he went to Chicago to work as a Community Organizer for $12,000 a year. Why Chicago? Why not New York? He was already living in New York. By "chance" he met Antoino "Tony" Rezko, born in Aleppo Syria, and a real estate developer in Chicago. Rezko has been convicted of fraud and bribery this year. Rezko, was named "Entrepreneur of the Decade" by the Arab-American Business and Professional Association.

After Law School, he went back to Chicago. Rezko offered him a job, which he turned down. But, he did take a job with Davis, Miner, Barnhill & Galland. Guess what? They represented "Rezar" which is Rezko's firm.

Rezko was one of Obama's first major financial contributors when he ran for office in Chicago. In 2003, Rezko threw an early fundraiser for Obama which Chicago Tribune reporter David Mendelland claims was instrumental in providing Obama with "seed money" for his U.S. Senate race.

In 2005, Obama purchased a new home in Kenwoood District of Chicago for $1.65 million (less than asking price). With ALL those student loans (?), where did he get the money for the property? On the same day, Rezko's wife, Rita, purchased the adjoining empty lot for full price. The London Times reported that Nadhmi Auchi, an Iraqi-born billionaire, loaned Rezko $3.5 million three weeks before Obama's new home was purchased. Obama met Nadhmi Auchi many times with Rezko.

Now, we have Obama running for President. Valerie Jarrett, was Michele Obama's boss. She is now Obama's chief advisor and he does not make any major decisions without talking to her first. Where was Jarrett born? Ready for this? Shiraz, Iran! Do we see a pattern here? Or am I going crazy?

On May 10, 2008, The Times reported Robert Malley, advisor to Obama was "sacked" after the press found out he was having regular contacts with "Hamas", which controls Gaza and is connected with Iran. This past week, buried in the back part of the papers, Iraqi newspapers reported that during Obama's visit to Iraq, he asked their leaders to do nothing about the war until after he is elected, and he will "Take care of things."

Oh, and by the way, remember the college roommates that were born in Pakistan? They are in charge of all those "small" internet campaign contributions for Obama. Where is that money coming from? The poor and middle class in this country? Or, could it be from the Middle East?

And the final bit of news.

On September 7, 2008, The Washington Times posted a verbal slip that was made on "This Week" with George Stephanapoulos. Obama on talking about his religion said, "My Muslim faith." When questioned, he "made a mistake." Some mistake!

All of the above information I got on line. If you would like to check it - Wikipedia, encyclopedia, Barack Obama; Tony Rezko; Valerie Jarrett: Daily Times - Obama visited Pakistan in 1981; The Washington Times - September 7, 2008; The Times May 10, 2008.

Now the BIG question - If I found out all this information on my own, why haven't all of our "intelligent" members of the press been reporting this?"

So, this information makes me scared to death that this man has been groomed for some time to garner the admiration and support of Americans everywhere and then be voted into office of the most powerful position on Earth. I pray it certainly does NOT happen! Go vote McCain! (I'm not keen on him either, but I feel better about him than Obama.)

Yep, I'm scared too. I'm glad you posted this.