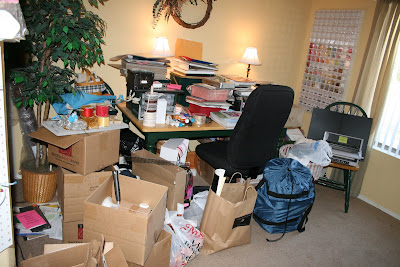 This has got to be one of the biggest chores ever...and I HAVE to conquer it today because Jennifer and her family are coming for Thanksgiving in a couple of weeks and she and Shane will be sleeping in here.

This is the (S)crap(book) room as it appeared two weeks ago just after we'd taken the old kitchen table and chairs that we were trying to sell, out of it. I worked on it a little that day and made a tiny bit of progress. In 5.5 hours, I was able to go through a bunch of the bags of purchases and sort those out, separate a bit of the "craft" stuff into its own crate, and put away ALL of my beads that were in a plastic bags still from the San Diego shopping trips or wherever. Believe me...it was A LOT! That's why it took so long! I had recently purchased a bunch of those embroidery floss holders for my bigger, less fragile beads, so I spent the time organizing all of the beads by color, style, size, whatever, taking them all off the strands and putting them in the containers. It was so nice to get that done! I hung up almost all of my tubes of beads on my pegboard but was short on hooks so C and I went and got some more and last Saturday I finished that portion. So, today, I have to begin working on the rest of the room, which still looks a lot like this picture!

I've been meaning to send a few people some shots of my SB room for a while (Scott - that's you), but haven't because literally, it's looked like this for well over a year. Nothing spurs you on to getting something done until someone says they're coming for a visit, does it?!?! Well, here are a few other pictures - messy as they may be - but I wanted to be able to show the progress.... 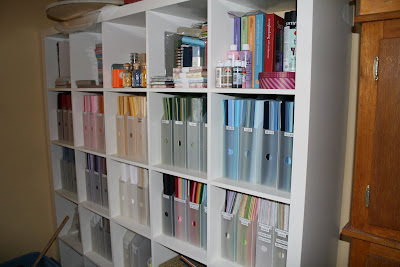 This is the "Monster" as we call it. It is HUGE! It is 6 feet high by 6 feet wide. I got it at Ikea and it is the Expedit bookshelf. You can find it here. It holds all of my 12x12 cardstock, some albums, etc. It's pretty organized already, but needs a little work. Next to it on the right is a little hutch that C brought into our marriage. It holds all my 8.5x11 cardstock in the bottom section and a bunch of other stuff in the upper part. It's pretty organized too and what isn't....well, it's behind doors for now. 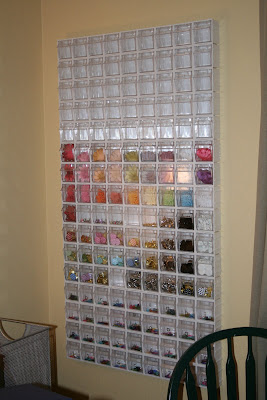 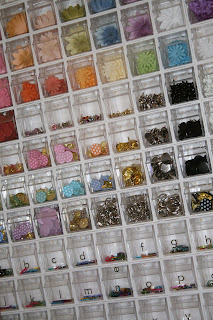 This is my tilt bin collection hanging on the wall. I got these from QVC - item F4504. Here is a link to them. They are really neat. They are individual bins and they interlock so you can arrange them however you want. This is 4 sets of 36 bins. In the bottom four rows, each bin holds one letter of the alphabet. I put all of my letters in these bins so when I am looking for letters for a title or such, it's easy to find the right one rather than having to go through the entire alphabet. Above the letters are all of my brads and above that, all of my flowers. 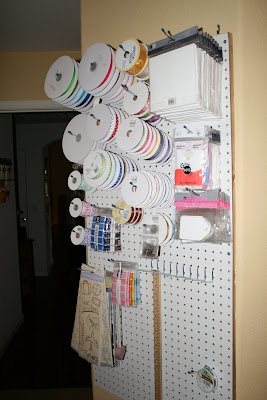 This is my pegboard that holds all of my mega-rolls of ribbon - grosgrain, polka dot, plaid, ric rac, etc. There's other stuff on it too, like packages of white envelopes, chipboard tags, etc. This is also where I hang all my tubes of beads, but when I took this picture, they weren't put back in place from our last San Diego trip (I usually take them with me so I have something to do when we're just hanging out in the hotel or at camp).

Well, now that half of the day is gone and C has left for work, it's off to the room I go. No more blogging for me today!

It looks fantastic! Good job. I bet you are tired. However it always feels good when you get alot of things done. Good for you.

I LOVE it. Thanks for showing the pictures. Be sure and post pics of when it's all done, 'k?