On the Road, Again.

Up early...way early...about 5 a.m. Showered and finished packing. Dad spent the night and he and C loaded up the truck. It was freezing outside. And...windy as all get out. We got the tarp over the load and the bungy thingy over it and off we went.

We pulled out around 6:30 a.m., I think. We had to stop by Macey's on the way out of town because they charged us twice for the sugar and since that was $19, that was a little too much to just say, oh well, about. Plus, they failed to charge us for two buckets that we bought so I needed to be honest about those too and pay for them. I could have easily started shopping again once I got in there, but C probably would have driven off and left me if I had. He was sure we weren't going to have enough room for everything as it was since we didn't know exactly what we were to be picking up in just a little bit. I took care of my little business at Macey's and we were on our way to the freeway. Note to self...next time, just go straight across 78th South from Macey's to I-15 instead of taking the Bangerter all the way around to the 15. I think it took far longer going that way. Oh well. Lesson learned.

We jumped on I-15 and we were on our way. We made it to Santaquin only 5 minutes later than we said we would. We found the gas station right away where we were to meet Mary Beth's sister. Her husband was there instead which was good because between he and C, they had everything loaded into the back seat area of our truck pretty quickly - which was great, because it was SUPER cold this morning. The wind was whipping everywhere. Our tires seemed really low too. I don't know if it was because we were so loaded or if they were just really cold or if they'd lost air, but since they were brand new tires, I was a little concerned. C put some air in them and all seemed well. We headed on our way again. We got to Nephi and we were hungry so we stopped for some breakfast at Burger King. We also had to make some adjustments to the tarp and bungie because the tarp was kind of whipping around too much and it looked as if snow or rain loomed in the distance and we didn't want things getting wet. We were just about frozen by the time we walked into the restaurant.

We quickly ordered, pottied, and headed back onto the road. Before we knew it, it was time to head over the mountain again. The road was actually better this time and we made it through fine. But, once we got to Hwy 89, everything changed. The wind was SO bad that C had to hold onto the steering wheel really tight the rest of the drive. It was nerve-racking...for him and for me. I've never before gone for 10 hours with hardly talking to the only other person in the car. I was just nervous...and tired. I slept a few times, but mostly I was just nervous. C is a good driver, but this wind was just BAD. The entire rest of the trip home was like this.

We called Auntie Sigie and Uncle Ward as we came into Phoenix and let them know we were going to come by and drop off their stuff and pick up the little dogs. In order to give them their stuff though, we had to unload all of the stuff inside the truck as well as undo the tarp and bungy and everything. It was okay though...it was better than having to unload and reload and drive all the way back over the next day so it all worked out just fine. Funny thing....the whole trip, I never took a picture of the truck loaded without the tarp until after we'd taken a ton of stuff out! So, I guess this will have to do! 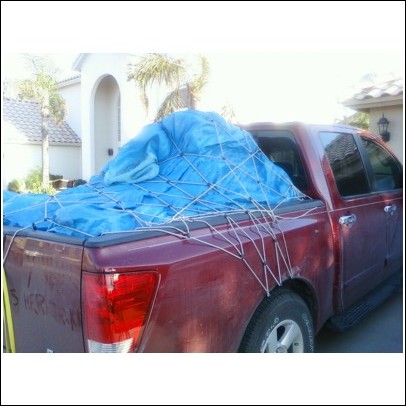 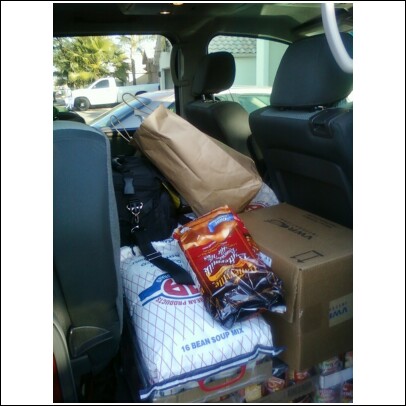 We finally got home and unloaded the truck - well C unloaded most of it. Thank goodness for dollies! He wheeled it in to our dining area in the great room and that's where it will now sit until we find some place to put it in our ever-decreasing-in-size house! 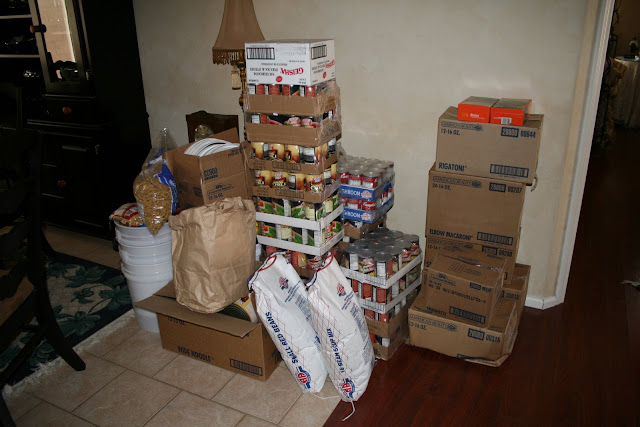 I'm so glad to be home. That was the longest ride ever. But, what a great trip. So much accomplished, so much good done, so many fun memories!

That is funny that you could still see the writing on the back of your truck. What, no blogging about that?