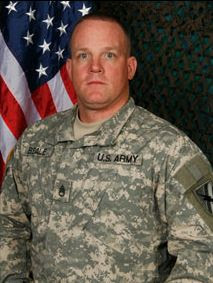 A friend sent this to me today and I opened it at work to watch it. I had to turn it off after just 30 seconds because it was so touching that I was crying. I finished watching it just now and wanted to post it for those who read my blog to see.

Staff Sargeant First Class John C. Beale was killed in the line of duty in Afghanistan this past month. His body was returned to Falcon Field in Peachtree City , Georgia , just south of Atlanta , on June 11, 2009. The Henry County Police Department escorted the procession to the funeral home in McDonough, Georgia.

A simple notice in local papers indicated the road route to be taken and the approximate time.

Nowadays one can be led to believe that America no longer respects honor and no longer honors sacrifice outside the military. Be it known that there are many places in this land where people still recognize the courage and impact of total self-sacrifice. Georgia remains one of those graceful places. The video below is a short travelogue of that day's remarkable and painful journey.

I, personally, was utterly touched by all of the flags that people held along the path, the salutes from other soldiers, past and present, policemen, firemen, and men and women alike. I was dumbfounded at the sheer number of people who stood by the side of the road to honor this man. But the most touching thing I saw in the entire video was a sign that someone was holding that said, "Freedom Isn't Free". How true. For 8 years now, we have fought a war in Afghanistan and another in Iraq. And, although many people believe we need to bring our soldiers home, they are still over there protecting us, even though so many people in our country think it's a waste. Well, it may be costing us money and there may be a lot of reasons why we should just come home, but I am eternally GRATEFUL to those men and women who are willing to give their life for me. Sgt. Beale, THANK YOU, and I wish I could have been there on the side of the road that day showing my support for YOU.

Thanks for this post. It is nice to see their is still a place where patriotism and respect for our soldiers is shown. We all need to be reminded of all that these soldiers do for us and keep them and there families in our prayers.

This was very nice. I really liked it. They are over there fighting and dying, so we can get up everyday and without giving it a thought, live our lives. We take it soooo for granted.