I woke up early this morning and was so GRATEFUL I got another day off!  I called Dad and Taylor to wish both of them Happy Birthday.  Then, did stuff around the house.  I apparently spent way too much time playing on the computer though as I had to rush as the last minute to get ready for the big wedding this evening!

I booked it down to Chandler and made it with about 10 minutes to spare.  I was worried I would be late as I had planned for it to take almost 1.75 hours to get there based on where it was, where I live, what time of day it would be, and the fact that I had no idea where I was going - oh, and that I wanted to be in my seat BEFORE it started without having to run the whole way and be sweating to death since the ceremony was going to be outside (in the 100+ degrees heat of the day).  With that said, I should have left by 4:15 pm.  As it was though, I didn't leave until 4:50!  I was fretting the whole way.  But, the traffic was quite light and I got there at 5:50.

The place is quite lovely and looks just like the pictures on the website.  I thought it was gorgeous on the inside.  There are a few fountains outside and the sunset was just perfect.  We were seated in the shade so the heat wasn't too bad and surprisingly, I wasn't sweating to death like Tina's fiancé was.

This whole wedding thing has really given me an opportunity to see my boss in a new light.  During the ceremony, he had very tender emotions just at the surface and you could see he was fighting back the tears through the movements his face was making.  But, that's okay.  I wouldn't have thought any differently of him had he shed those tears.

This wedding was the bringing together of two families - three children from the bride and two children from the groom.  They did something really quite interesting - they had each child take turns pouring colored sand into a vase.  Then, both parents poured colored sand in together at the same time on top of the others.  The lady performing the ceremony talked about how they would never be able to separate just one color of sand again.  Interesting...

She also said in her speech something that caught my attention - she said to Scott and Deby - don't expect perfection.  I chuckled to myself and said under my breath, "because you won't get it."  Now, I did not mean it that THEY wouldn't get it from each other - I meant it that none of us get it.  There is no perfect person on this earth.  Christ was the only perfect person.  Sure, there are a few people who come close sometimes, but generally, none of us are perfect.  Sometimes people just expect their spouses to be perfect and the truth is, they aren't...nor are we.  The point here is that when our spouse (or anyone) does something that hurts our feelings or irritates us, we need to forgive them.  I was such a wretch last night on my way home and even moreso when I got home.  Melon Man had done a couple of things that upset me and, in turn, I wasn't kind to him.  I'm so sorry for that.

So, here are a few of the pictures I took.  Not great, but good enough to share on my little blogosphere as a remembrance of the occasion... 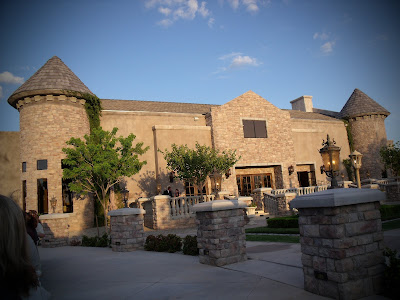 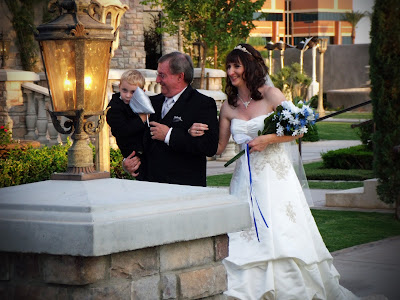 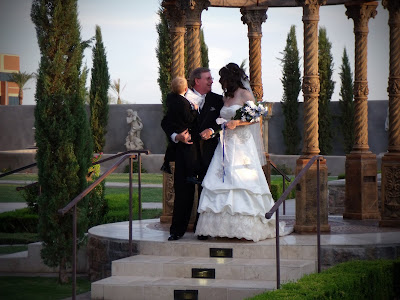 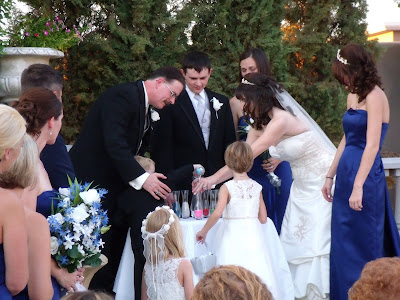 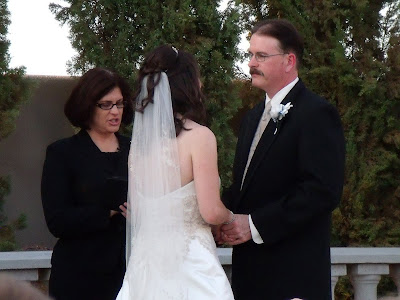 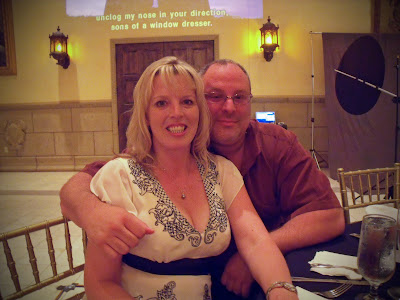 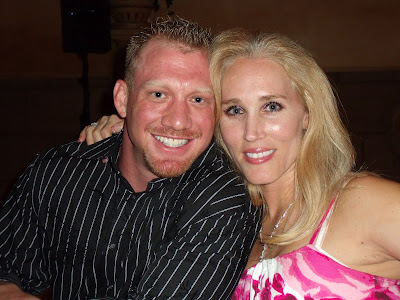 These last two pictures are of my co-worker, Cindy and her husband Jerry, and our Admin Assistant, Tina and her fiancé, Cody.

After the dinner of prime rib, coconut chicken, asparagus, and potatoes, there was the traditional first dance, daddy/daughter dance, etc.  I finally made my way to congratulate the couple and headed home...after all, I did have an hour long drive ahead of me and some of us had to work the next day!