All in a Day's Work

Today was the first day back to work after the new year began and it started off quite normal - busy, but normal.  I worked for hours building forecast files out of plan files.  However, at one point, I was on the phone and I could see one of the Directors from another business unit outside my office window.  She looked a little flustered - which I've never seen from her.  She was looking for my boss, but he had unexpectedly stepped out.  Based on what was to come, she SHOULD have stepped into my office and interrupted me, but she didn't.  She hurriedly walked away.  I got off the phone and asked what was going on.  None of the girls around knew.  Then another person came around and told me that the fire alarms would be going off in a few minutes and it was NOT a drill.  I asked what was going on and was told there had been a bomb threat.  (I can't really go into more detail about how we were notified, etc. due to the ongoing investigation as to who the person was that did this.)

Great.  What an interruption to my day this was going to be.  I had a TON to do today.  But, emergency girl kicked into gear and as soon as the alarm went off, I started making sure our folks were getting out of the building, because see, not only am I budget girl, but I'm also volunteerism girl, maintenance girl, holiday dinner girl, AND emergency girl.  I am the "Floor Captain" for our business unit and I am the last person out of our area when we evacuate.  As soon as the floor was evacuated, I headed off for Security to report in. 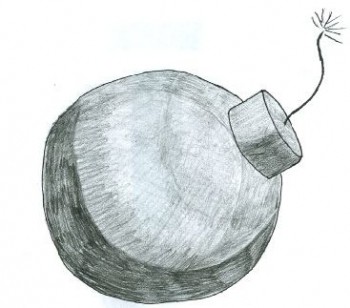 I was the first Floor Captain to arrive.  Soon, the others came.  Some knew what was going on, others hadn't yet heard.  There were 3 police vehicles out front already and about about 10 cops standing there talking to our head of Security.  Soon there was a group of managers headed back into the building.  Apparently, the police would not search the building and we were told we had to do an initial search.  Years ago, as a manager, I was trained to do a search such as this, but I don't know that any of these newer managers had been trained.  I headed back to my business group's area and began doing a sweeping search.  You don't touch anything.  You don't move or open anything.  You just look from eye-level to the ground for anything unusual or out of place.

I came across something very quickly.  It was some sort of a box that was covered with a blanket or piece of fabric or such.  I immediately flagged down the two guards that were also searching and they came over.  They thought it was suspicious as well.  One of them headed back to Security (rather than radioing down to them) and about 7 minutes later came back with two police officers and the head of Security.  They inspected the box and everyone was fairly cautious.  We tried to contact the person whose desk it was under, but there was no answer at her assembly point outside.  We tried over and over.  No answer.  (Apparently, the Assembly Point Captain had erroneously stepped outside of their evacuation responsibilities and the backup person had not stepped in in their place so there was no radio outside with which to communicate to them...big error.)  In the meantime, we also located a fanny pack in a janitorial closet with a wire sticking out of it.  The police determined it was okay.  But, we still had the issue of this box.  Even the police didn't want to touch it.  All of a sudden, we hear over the radio, "All clear.  Let the employees back in."  All of us dealing with this box were like, "WHAT THE HECK?!?!?!"  We felt, though, by some information on the box, that it was PROBABLY okay and nothing to worry about, but until we heard from someone who knew what was in the box, that we would be pretty protective of the area surrounding it.  Before a ton of employees made it back in the building, we were finally able to confirm that it was okay.  Whew!

I headed back to my office and realized one very interesting thing...we've always been told that if the fire alarm goes off, be sure to take your purse with you since if something really does happen, you likely won't be able to get back in to get it for a long while.  Well.....guess who didn't take their purse with them at all?  Yep, me.  How ironic was that?  Oh well, at least all of our employees were safe.  No bomb went off.  It was all in a day's work - but was certainly an "exciting" way to start off the new year!

Scary. There was a bomb threat at the center my mom works at a couple of weeks ago. Glad everything turned out fine!