I'm Glad That's Over With & A Fly on the Wall

Today was the day we had to give our presentations.  I decided to go first and just get mine out of the way.  I knew what I was talking about - it was just the premise that I was doing it under that was making me uncomfortable.  Because of that, I was nervous.  My leg was shaking.  I spoke too fast - fast enough that at one point I realized I was out of breath and just had to stop and slow down.  I had written a really good intro though so that really helped me feel better about the whole thing.  I ignored that they were video-taping our presentations and just went on and did it.  I was glad when it was over and I could just sit back and watch the others.

After the class was over, we said our goodbyes to each other and some headed for the airport, others upstairs to the 3rd floor to work.  Before heading up, I stopped off in the restroom first, and as I was washing my hands, I looked into the mirror in horror.  NOBODY had said one word about how AWFUL my hair looked!  See, this morning as I was leaving to head over to work, it was quite foggy and there was a fine mist in the air.  I thought for sure that I'd added enough product to my hair that the fog, the 98% humidity, and the sweat from me sweating out of every pore would protect it from frizzing.  I was so wrong.

Remember the episode of Friends where they all go to Jamaica and Monica's hair goes from perfectly straight to major frizz?  Yep, imagine me, with all this frizz, but with shorter chin-length hair.  Not a pretty sight! 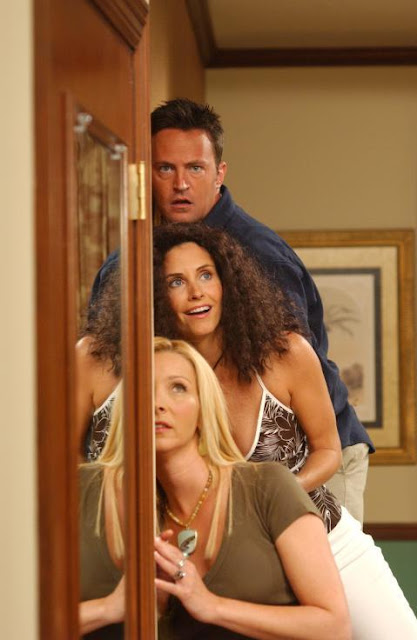 So, I tried to fix it, the best I could and I just said well, there's nothing I can do about it right now and went back to the room.  I asked one of the girls why they didn't say anything.  She told me "we wondered about it...we thought maybe you did it like that."  I was mortified but we all laughed about it when I reminded them of Monica's hair in that episode.

So, off to work I went.  I worked until about 6 and then left to head up to Catherine's to get my clothes I'd put on hold.  I stopped off at Cheesecake Factory again and decided to get some take-out because it was just too busy to have to wait for a table and then sit there among everyone else all by myself (which I normally don't mind, but not when it's super busy like that).  I probably should have just stayed and eaten though because it took almost 45 minutes to get my food.  I did get cheesecake this time.

I got back to the hotel and it was raining.  I had my purse, backpack with my laptop, two shopping bags, and two bags from the restaurant (they separated the cold stuff from the hot stuff) to carry in...in the rain...from far away.  Nope, not gonna do it.  I valeted it this time.  Yeah, it was $15, plus tip, but you know...it was SO worth it.

I headed upstairs to eat my dinner, watch American Idol, blog, and go to bed.  The cheesecake was good, but not the exactly taste I was going for. Same thing with the meal this time too.  I guess I was just going for something different this time.  Should have stuck with the stuff I know I like.  I should have gone with my instincts. Eat and learn.

Oh...yeah...the fly on the wall thing...while I was in the restroom today, I looked over and what did I see?  Yep, a fly on the wall!  I just had to take a picture.  How many times do we hear that phrase and wish we could be a fly on the wall?  Well, I hope this one got a thrill.... 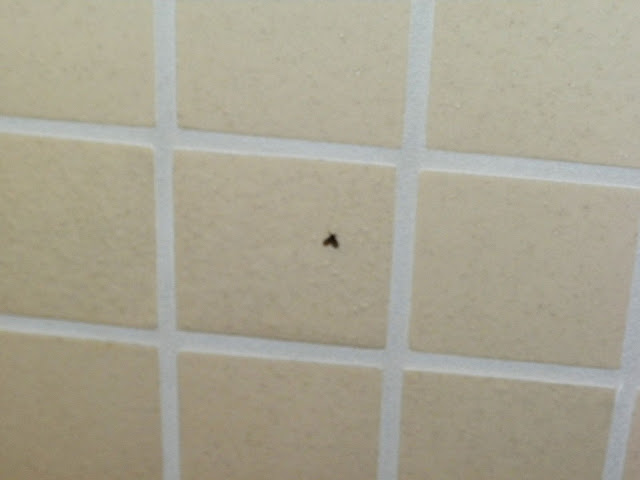 At least it could pass as a hairstyle, however frizzy. Mine would have been completely straight as if I had just stepped out of the shower and let it air dry!