Melon Man recently took Dog to the vet for his shots.  When he came home, I was looking at his paperwork and he's down to 88 pounds.  I knew he was looking a little skinny!  He'd been throwing up a bit lately and not eating much so I had wondered if something was wrong.  Maybe he had a little bit of doggie flu.  I don't know.  I just knew that I didn't like seeing him so thin!  Plus, every time I put a bowl of doggie food down for him, he wouldn't eat it.  I was at a loss.

Recently I was talking to someone that has a dog similar to Dog.  She told me her dog goes through the same thing periodically.  She told me to cook up some brown rice and some vegetables and then mix it in with his food.  So, I did.  I actually tasted it before adding the dog food and it was GOOD!  I've never liked brown rice, but maybe it was this brand or maybe my tastes have changed, but it was yummy. 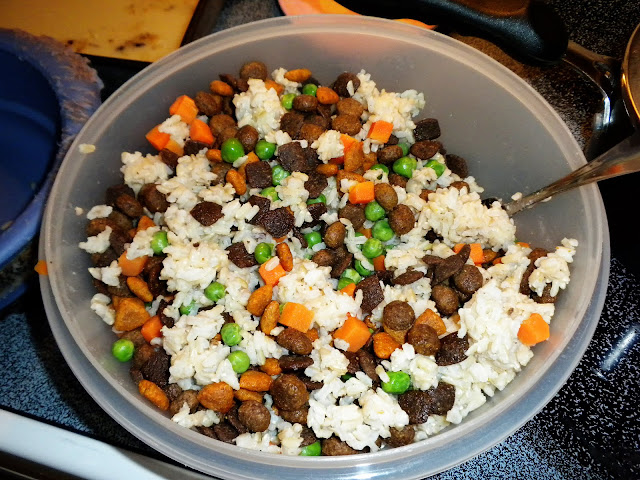 I added Dog's normal food to it and then gave him a good sized bowl of it.  He gobbled it down right away.  I gave a bowl of it to the little dogs too and they enjoyed it.  So now, I had Melon Man buy two more bags of brown rice and every so often, I plan to make up some doggie rice casserole to help Dog get back to a healthy 95 pounds or so.

I am sure he loved it! Maxine would in a heart beat. It looks good! Yum!