THIS is Why I DON'T Bake

Today, after church, I came home and worked on trying to catch up on blogging.  Maybe I should have worked on practicing the Primary songs on the piano.  I was asked at the last minute to fill in and I stunk at playing those songs!

I swear, I think I have ADD.  I can not focus on anything lately for the life of me.

I tried blogging today.  Yeah, I got April 4th, April 9th, and April 10th finally added, but I am still missing a whole week's worth of other entries.  Some are started, some aren't.  I could just not do them, but they are REALLY important entries to me so I need to do them.  I uploaded some videos to YouTube so I could link to them on my entries and that took forever.  So, while I let those upload, I was on the phone with Jennifer about 12 times helping her with her camp stuff.  We worked together and came up with some really cute stuff.  I'm really proud of her and the efforts she's putting into everything.  She is really made for that calling.  She is the Assistant Stake Camp Director this year.  I guess they saw how great she did with her part of the food assignments last year and knew she would be perfect for this new position.

After I finished designing most of the stuff, I decided to head into the kitchen and try my hand at making homemade wheat bread.  Not because I really wanted to, but because we are out of bread and Melon Man didn't buy any.  When we don't have bread, he eats out for lunch and that is far more costly than sandwiches.  Yeah, I'm cool with him eating out once in a while, but sometimes it is just more than we need to spend.  Since he forgot to buy bread on Saturday, I decided I would try using our food storage and make some whole wheat bread.

I had recently found a recipe for "Easy Whole Wheat Bread" on a food storage site and thought I would try it out.  So...I dug out my "Kitchen Mill" electric wheat grinder.  I dug out an open can of wheat from the pantry.  I dug out my vital wheat gluten from the food storage corner in our bedroom.  I dug out my dough enhancer from the baking section in my kitchen spices and such cupboard.  I melted down some honey that had crystalized.  And, I got out all the other ingredients I needed and put them in my "mise-en-place".

Mise-en-place (pronounced mees-en-plahs) is a fancy French chef term defined by the Culinary Institute of America as "everything in place", as in set up. It is used in professional kitchens to refer to organizing and arranging the ingredients that a cook will require for the menu items that he or she expects to prepare.  Recipes are reviewed to check for necessary ingredients and equipment. Ingredients are measured out, washed, chopped, and placed in individual bowls. Equipment, such as spatulas and blenders, are prepared for use, and ovens are preheated. Preparing the mise en place ahead of time allows the chef to cook without having to stop and assemble items.

Now...if I had PROPERLY prepared my mise-en-place, maybe I wouldn't have had the problems I did.  I decided that I really didn't want to make FIVE loaves of bread as the recipe made, so I decided to halve the recipe.  Yeah...all good and fine when you actually prepare a mise-en-place.  You actually measure everything out and set it out together so if you make a mistake, you can fix it ahead of time.  Well, let just say, that I definitely should have done that.  I thought just getting all my ingredients out into one place would be enough.  NOT!  As I was mixing in the last of the whole wheat flour I had freshly ground, I wondered why in the heck the dough was not pulling away from the sides of my professional size Kitchen-Aid in beautiful Stainless Steel.  All of a sudden, it hit me!  I'd added the full amount of water - all 5 cups! And, I ended up adding the full amount of salt. So, I ended up quickly dumping that dough into a huge bowl and hurrying to make up the rest of dry ingredients for the other half of the batch and then mixing it altogether.  That meant that I had to now grind another 6 cups of wheat flour!  After about 3 cups, flour starting flying out of the little filter on the side!  It was going everywhere!  I was so frustrated with myself!  Why on earth can I not bake?  I have always been a horrible baker.  I used to do pretty well at cooking, but even that has suffered now over the past few years.  I guess if you don't do it very often, you lose the skill.  Even Melon Man's cooking skills have decreased over the last two years since he doesn't use them everyday anymore.  Here I'd wanted to show my man that I could step up and make some mighty fine wheat bread for him and, of course, he would love it.  Yeah, right.  I was so afraid for it to come out of the oven.  I just knew for sure it was going to either not rise or it would be gross or something.

Now, this is the second reason I don't bake (the prior paragraph being the first reason): 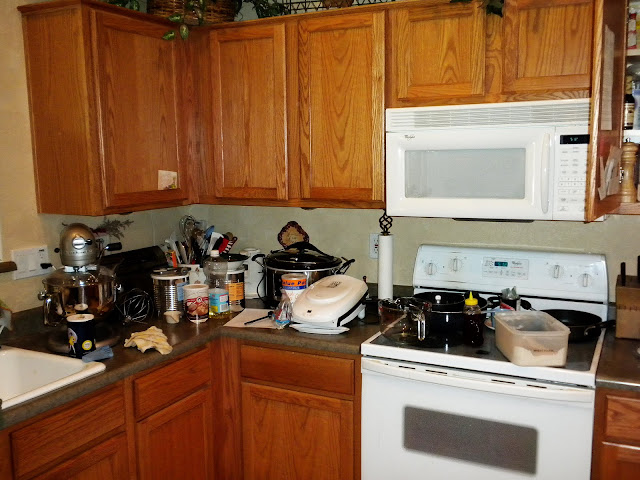 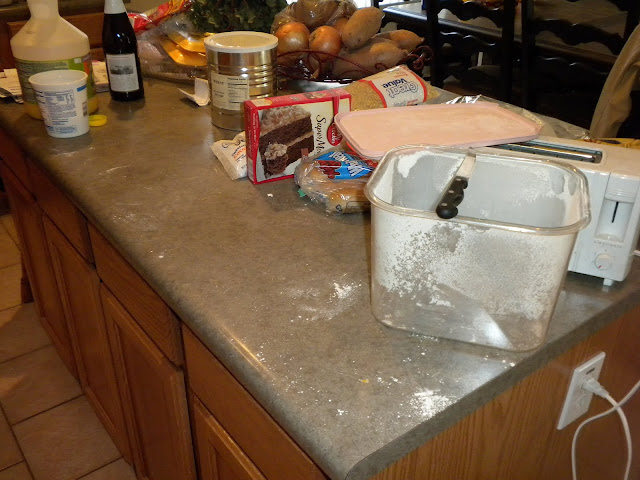 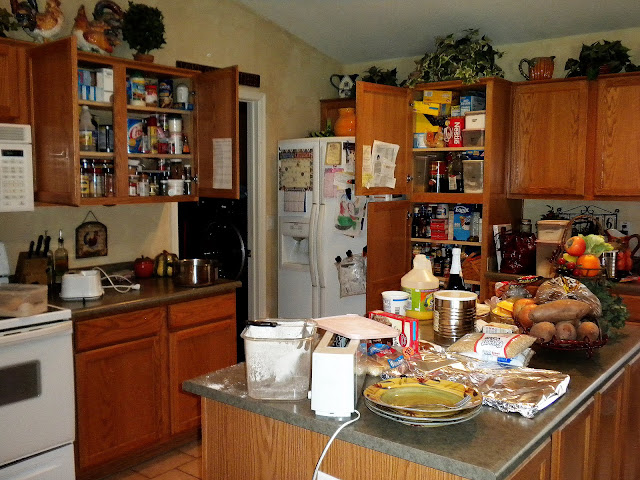 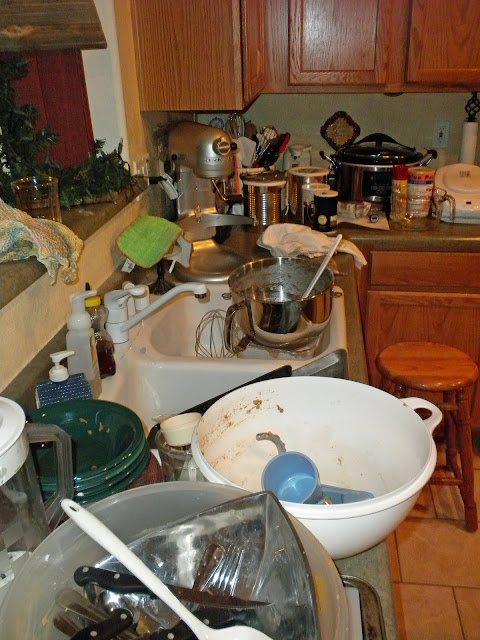 Yep, stuff everywhere.  Flour everywhere.  Every cupboard open.  Dishes galore (yes, some of them are from the last couple days).  I am just so NOT good at this stuff!  Calgon, take me away!

So, while the bread was baking, I came in again to blog and ended up calling Jennifer on the phone again, then surfing just a little, then photo-editing, then the timer went off and it was time to take the bread out.  Oh my, it smelled so good.  It wasn't too pretty looking loaf-wise, which I've now learned what to do to make it look better, but it just smelled good.  I took it out of the bread pans and put it on some racks to cool and then came back in to the computer.  Jennifer called and we did some more editing and such on her camp stuff.  As we're talking, I hear Melon Man in the kitchen and what is he doing?  Slicing hunks of bread off a loaf!  After Jen and I hung up, I went in the kitchen and 1/3 of the loaf is gone!  Silly man.  So, I ask him...how is it?  I REALLY wanted to hear, "it's really good."  But, I got an "ok."  Not even a "not bad."  Hmph.  So, I sliced me off a slice or two...okay, three...they were small...and put some butter on them.  I thought they were pretty good.  Not great, but pretty good.  I think I'm going to call Sister Saunders and get her recipe.  She provides the bread for the sacrament each week and today it was especially delicious.  Maybe I'll do better (comment-wise) with her recipe.

After all was said and done, this is what the bread turned out like...yeah, like I said, not pretty, but pretty good to eat. 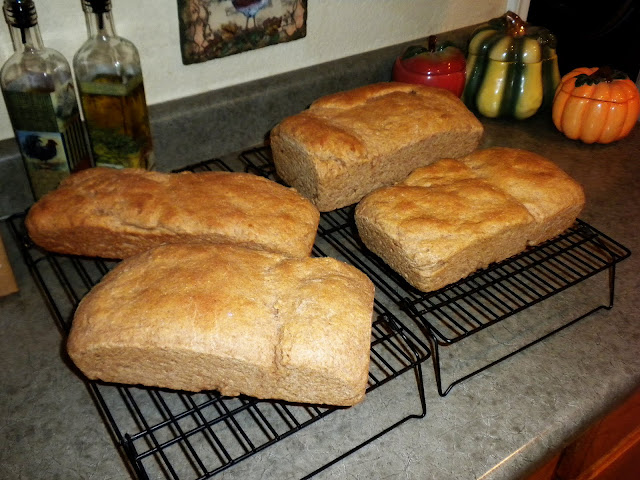 I bet it will make lovely toast or salami samiches as Melon Man says.  Baby...buy me some bologna and sliced cheese tomorrow, ok?  Yum.  I can just taste it now.  I've added the recipe below if anyone's interested.

Mix first 3 ingredients together in mixer with a dough hook. Add water all at once and mix on speed 1 for ONE minute. Cover and let rest for 10 minutes (mixture will start to rise).

Turn mixer on to speed 1 and add flour ½ cup at a time until dough starts to pull away from sides and bottom. Turn mixer up to speed 2 and mix for 10 minutes. Dough should be soft and slightly sticky. Form into 5 loaves, place into greased pans. Let rise til double (about ½ hour). Bake at 350 degrees for 25 minutes.  Makes 5 loaves.

Thanks for making me cry at 9 a.m.! It isn't very often that I hear that someone is proud of me and you don't even know how much it means to hear those words coming from you. You are such a wonderful sister and I cannot begin to express my gratitude for all the help, time and service you have rendered in my behalf and on behalf of my calling. No wonder you didn't get your blogging finished, I was sucking up all you time and energy! Thank You! Thank You! Thank you! From the bottom of my heart.

I think your bread looks great. I do agree though, you have to be consistent with your cooking skills or they begin to dwindle. Knowing how much you helped me, I am thinking you were pretty ambitious to have been making bread. And just an Okay, what is that about? If he ate 1/3 of the loaf it must have been pretty tasty!

I'm noticing a pattern with Clint. I think his 'ok' really means AWESOME, otherwise he wouldn't gobble it up! Breadmaking I've decided is an art. It takes lots of practice then becomes easy. I can do yeast rolls no problem, but I just don't do bread that often and it could always be better. I think your loaves look awesome for 100% whole wheat!

You are so funny! I am a clean as you go person in my kitchen. It seems I am the only one in my house. There is nothing as overwhelming as a messy kitchen! You crack me up with yours!

In my opinion, with all you had going on you did GREAT!