The reason for me to go to Chicago this week was to attend a course on negotiating called Getting to Yes.  I guess I'm just not all that great at negotiating and so I was hoping to learn a lot.  Unfortunately, I didn't find as much value in the class as I'd hoped.  Darn.  We all had a fun time pretending we were William Shatner though from the Priceline commercials!

After class was over, I ran up to Catherine's clothing store up in Vernon Hills.  I'd ordered a top and undertank from my local store at home and had them sent to the Vernon Hills store so they'd arrive while I was there in town.  They had arrived that day so I went to pick them up.  However, I found so many other cute things on clearance that I spent 2 hours trying everything on.  The humidity was so bad - even in the store - that my hair was a sopping wet mess.  Then, they told me there were 14 new boxes arriving on Wednesday.  I asked them to pull one of everything out in my size and hold it for me to try on on Thursday! 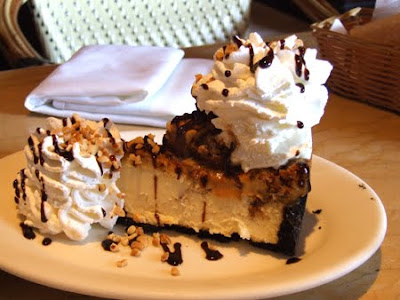 Next, I headed to the Westin and picked up two co-workers for dinner and we headed to The Cheesecake Factory.  We had a really lovely time talking and laughing.  Ginger had a salad that looked delicious and the lime-cilantro dressing was phenomenal.  I wanted to buy a bottle of it to bring back, but then I remembered that I wouldn't be able to carry it on the plane and putting it into my checked luggage wouldn't be a good idea either!  I had the garlic farfalle pasta with chicken and it was quite delicious.  The peas were a little overdone, but it was still yummy.  We were all pretty full but somehow we all decided we were desirous of some cheesecake.  Honestly, I couldn't eat another bite...but I ate a little of the whipped cream and then took the remainder back to the hotel.

Once I got back to my room, I promptly plopped down on the sofa and zonked out.  I was SO tired!  I woke up around 10 and ate my cheesecake.  Then, I checked email, blogs, etc. and then headed for bed.  Tomorrow is a new day full of regular work!

Shopping in other cities is always so much moe fun than in your own. Did you find some cute stuff in the new stuff they pulled?