Today is our Easter dinner.  A while ago, Lisa and I had been discussing what to do about Easter.  Since Both she and I work, it's always harder to host a big family dinner on Sundays because it's a lot of work right before the weekend is over and we have to go back to work the next day.  So, over the years, we've done 4th of July, Memorial Day, Labor Day, etc. usually on Saturday versus Sunday or Monday depending on the actual date of the holiday.  It works for us.  It works for our families.  But...there are just some holidays that we haven't done it with because that particular holiday just seems to NEED to remain on Sunday - one such holiday being Easter.  Well, this year, we evaluated everything - the guest list, work schedules, church schedules, church responsibilities, etc. - and decided that we would try doing our big family & friends Easter dinner on Saturday instead.  This way, we wouldn't have to rush home from church to get to a dinner, we wouldn't have to miss Melon Man again because he'd have to sleep, and, we could all go to our own church services tomorrow, come home, and have Easter dinner leftovers.  So, that's what we're doing...having Easter dinner today rather than tomorrow.

Linda Lu and I both were asked to bring the potatoes.  Of course, we're both bringing cheesy potatoes...it's tradition!  We'll have a little cheesy potato cook off!  My mom used to make these and they were called Sour Cream Potatoes.  Then, when I married Mr. Spock, his mom would make them and they were called Yummy Potatoes.  I've been making them for years and they are truly yummy.  Once I went to a funeral and they had them there too, so now we call them Funeral Potatoes too. 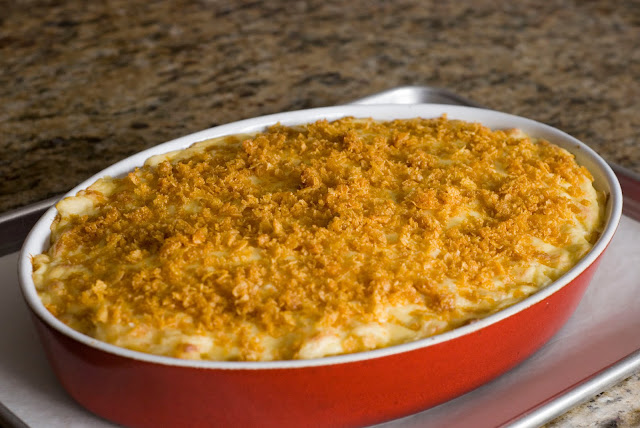 Today as I was making them, I never even thought to take pictures of how to make them!  (So I borrowed this one from the Simply So Good blog.  The one thing though that I think really makes the difference between my version and other versions is that I use fresh potatoes, not frozen hashbrowns.  This recipe makes a 10x14x3.5 lasagna pan full.  For just a normal family, halve the recipe.

Boil the potatoes in salted water.  You want to flavor the water that they potatoes will cook in because it will infuse the potatoes with the flavor rather than having to add salt to the sauce, potentially oversalting it.  Cook the potatoes until they are almost soft but just still slightly a tiny bit al dente.

Remove the potatoes from the pot and let them cool on a towel.  Once the potatoes are cool, peel the skins and grate them into a large bowl.

In a large pot, melt the margarine and saute the onions until transparent.  Add about 1 teaspoon salt and 1/2 teaspoon pepper.  Stir well.  Empty cans of soup into pot with onions.  Stir well.  Add sour cream.  Stir well.  How you do the cheese is up to you.  Some people grate the cheese.  I don't.  Why?  It's just extra work.  Just chunk it up or cut it into small pieces.  Melt it in the soup/sour cream/onion mixture.  When it's all melted, remove the mixture from the heat and pour over the grated potatoes.  Carefully fold the soup into the potatoes ensuring all of the potatoes are mixed into the soup well.  Transfer to a deep 9x13 pan and bake for 40 minutes at 350 degrees.  They should just start browning slightly on top.

Optional:  Some people like a crunchy topping (see the picture above).  I don't because the topping becomes soggy after sticking the leftovers in the fridge and that's gross, so I don't make that part.