It's a Heat Wave!

After four days of solid rain, the sun has finally appeared and it's finally warmed up to a whole whopping balmy 54 degrees...at 6:45 pm.  Finally.  It's been so cold and rainy the whole time we've been here! 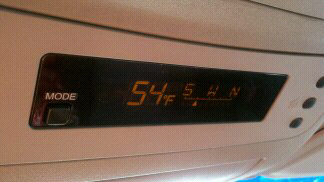 The day started off with sleeping in until about 9:30 a.m.  I guess we really needed it.  We missed breakfast at the hotel, so we munched on chips and cookies.  Good breakfast, I know.  Oh well.  After that, I began getting ready for the day and soon the calls from the family began.  First, Jen, then Jules, then Dad, then Kev, then everyone all over again, along with a few outgoing calls to all of them and Kurt/Ang.  After a bunch of discussions, we decided that Jen and Julie and their families would come up to the hotel and the kids would swim at the water park with Uncle Melon Man.  Jen and Julie and I would run to "The Bead Fairy" and find some more beads for our watches and then come back to the hotel and make bracelets down at the pool while watching everyone swim.  Kev and Jodi had some things to do and Kurt and Ang were spending the day with Ang's family and then out to dinner for their anniversary, so we missed them being with us.
So, that's what we did.  Julie dropped off the boys with Uncle Melon Man and Shane and the boys dropped Jen off at the Bead Fairy and then came up to the hotel to swim.  Julie and I raced over to meet Jen and I bought a bunch of fun beads.
I just had to take a picture of the mountains while we were driving...the mountains still have a ton of snow on them.  In fact, Alta ski resort got 13 more inches of snow overnight! 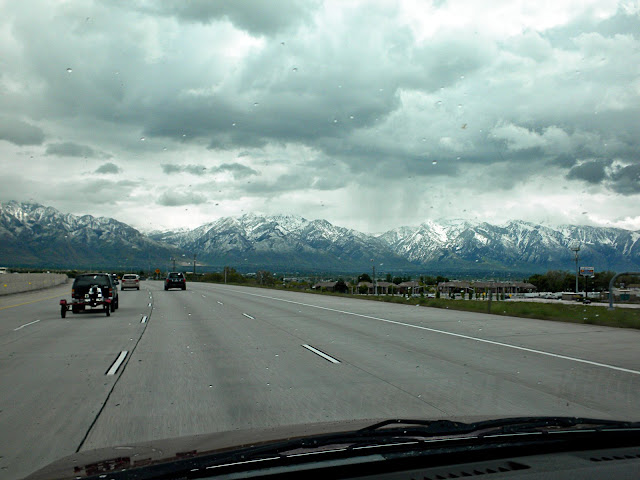 Then, we raced back to West Valley and picked up TWO big buckets of KFC chicken, 7 large sides of potatoes & gravy, coleslaw, macaroni & cheese, and 12 biscuits﻿.  We came back to the hotel, all the guys and kids came back to the room, and we began to eat lunch.  In the meantime, Dad arrived at the hotel too.  So, here we had 10 people in our little hotel room, eating up our impromptu version of Memorial Day lunch.  It was quite the fun experience!  It was a little cramped, but it was still fun.  So, after we were done eating, we headed down to the pool and all the kids swam.  It was so much fun seeing Taylor having a good time.  At 4 p.m., the water slide opened and the kids had a blast going down it. 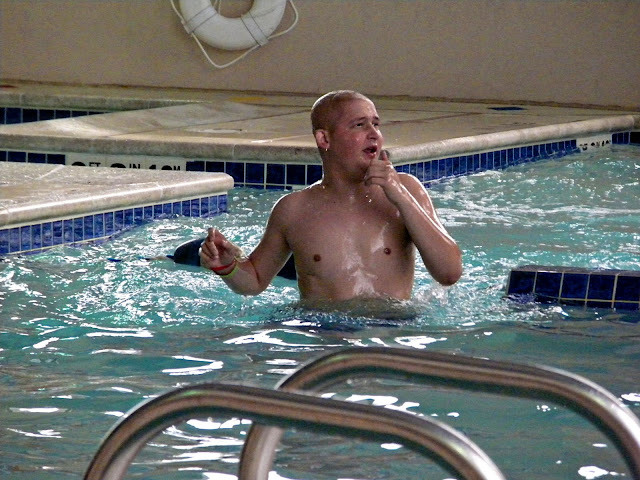 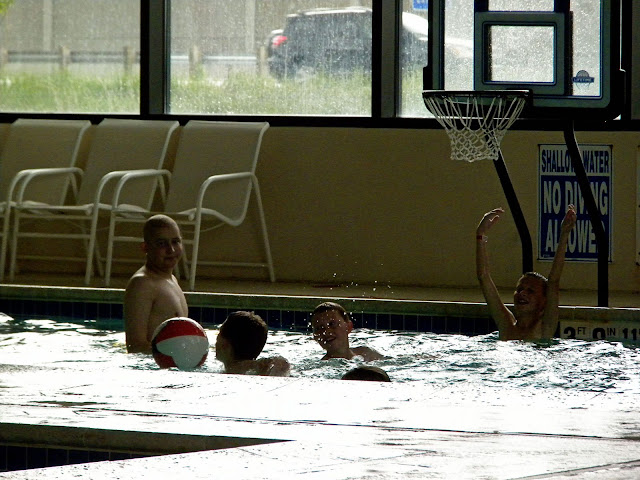 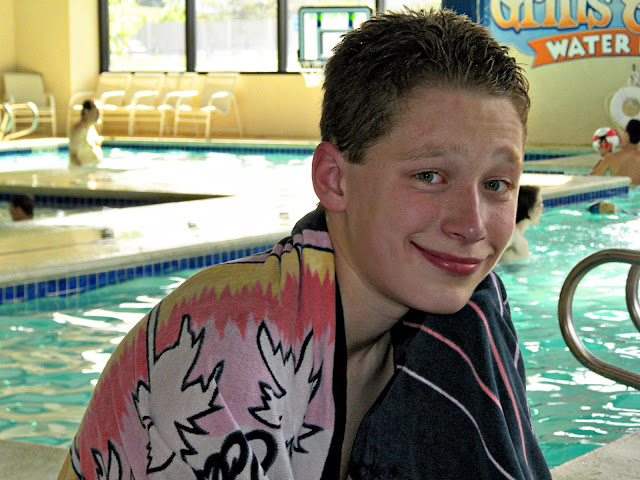 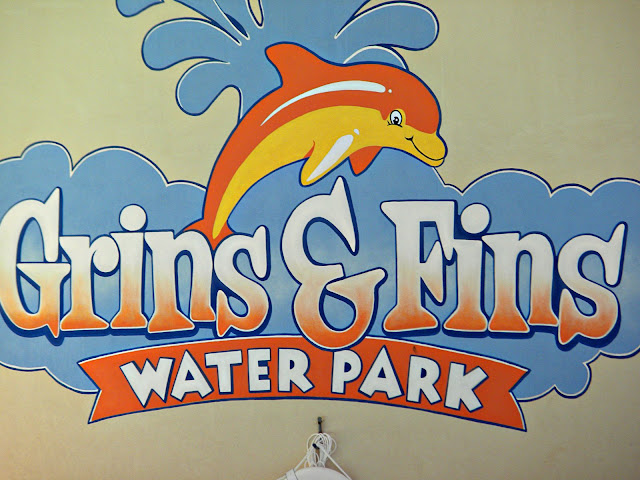 Jen and I worked on making bead watches while we visited with Julie and Dad.  I'm sure people thought we were weird sitting there beading at a pool, but it was something for us to do while the kids swam.  And, that's okay with me! 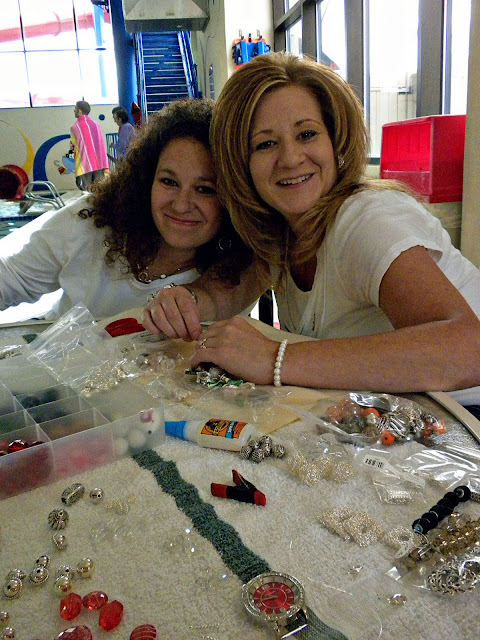 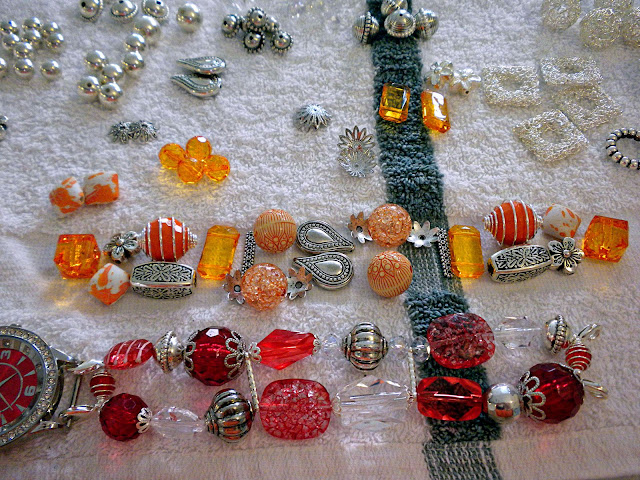 After we were done at the pool, we talked to Kev and decided to head to Julie's for an actual BBQ.  Taylor wasn't feeling too well, so Jen's family headed home so he could try to recover before our special auntie/uncle/nieces/nephews dinner tomorrow night and be able to go with us.
We stopped off at Harmons to get some chips, buns, and sodas and then headed to Julie's.  Kev started an awesome fire in the fire pit and we all sat around visiting and laughing until about 10 p.m.  It was quite fun!  Never before can I recall a Memorial Day where it's been so cold!  We sat around the fire while the flames danced until we couldn't take the cold any longer, then we headed back to the hotel.
Tomorrow is the last day we will be here.  Melon Man and I are going to run a few errands - head to Maceys for a few more food storage items, pick up some plastic wrap to wrap Melon Man's nightstand, and who knows what else.  Then, in the early evening, we'll head to pick up Jonah and Taylor, then all the other kids and will head off for our special dinner!

I want a braclet! You all do such great work. Jealous!