This picture was shared with me today.  I had to hold back the tears - but that didn't last very long.  I saw a video that was actually captured at this funeral for Navy Seal Jon Tumilson and then I lost it.  This young man died serving our country last week.  His body finally arrived home for his funeral.  During the entire funeral, Jon's canine companion, a labrador like my Dog, laid on the floor in front of his casket...the entire time.  To think that this dog loves his master so much that he knew he was gone, and that he, too, was sad like the other 1,500 people at this funeral, was so touching to me. 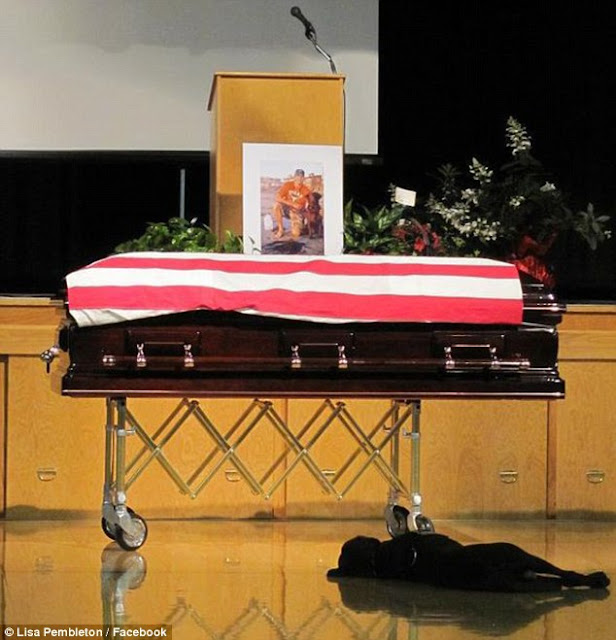 It's things like this that help me remember that dogs are not "just animals" but that they have a soul too and have feelings and emotions other than aggression and such.  I grew up in a home where animals weren't really allowed - especially in the house.  Sometimes a dog or cat would end up at our house (usually it was Aubie bringing it home) and our dad would tell us to get rid of it, but secretly, I think our mom would let us keep feeding it because she had a small affection for animals too.  When the animal would die (or get accidentally stepped on by Dad and then die), Dad would, of course, go bury it in the yard somewhere for us, but that's about as much love toward animals that we experienced.  Kevin/Aubie always has had the biggest heart for animals.  Any stray he found would end up at our house.  Even now, he raises ducks and chickens and what not.  But, overall, I'm still the only one with a dog.  Two, in fact, down from three.  Yeah, I didn't WANT dogs, but I LOVE my dogs.  They make me angry.  They make me laugh.  They make me cry.  And, as hard as it will be if they die before me, I think it will be harder still to see a picture like this from heaven if I go before them.

Oh, man. Grabs my heart. We miss our Darla so much!