Melon Man and I have a tradition of opening gifts on Christmas Eve, rather than on Christmas morning.  We just like the ambiance of all the soft lights and such.  So, last night after all the company left, that's just what we did.  We only had a few presents to open so it didn't take long and soon we were in bed...we were really tired.

This morning, we got up and went to church.  It was only 70 minutes long and I was playing a piano solo - What Child is This.  My first time ever to play in Sacrament meeting!  I was so nervous.  I really did not want to mess up!  Linda came to support me and I was so appreciative of that!  I sat there listening to President Ritman's talk and kept fidgeting with my hands.  The joints between my finger base and my palm part of my hand have really been bothering me this week.  I didn't want them to hurt so bad that I couldn't play so I made sure not to interlock my fingers as that seemed to agitate them.  Then, I would want to hold Melon Man's hand, but I had to hold it flat-handed so it, too, did not hurt my fingers.  Then, I would hold his hand palm-to-palm but then my hands and fingers would get sweaty and since I didn't want them to stick to the piano keys, that didn't work either.  So, then, I wouldn't do anything with them and I was getting nervous so they started getting cold.  Couldn't have that!  So, I just did the best I could to keep them warm and pain free.

Soon, it was my turn and I walked up to the piano.  I silently prayed all the way up there that I would play just fine and that I wouldn't make any mistakes.  I sat down and started to play.  I felt the nervousness leave my body and I just tried to play it as beautifully as I could.  The whole time, I kept telling myself, don't rush, don't rush.  When I rush, I make mistakes.  I knew I needed to play it "heavier" at certain parts, but I didn't want it to be like pounding or anything.  I think it turned out very nice.  Yes, I made a couple very small mistakes, but nothing overly noticeable, I hope.  Then, when I was done, I sat there while Bro. Baumann scooted on over to the organ bench.  He played the introduction for Joy to the World which was our closing hymn and Sister Britton stood up to lead.  We both watched her to start us and then all of a sudden, the sound poured forth from both the organ AND the piano and it was beautiful!  It was such a special end to a beautiful Christmas Sacrament meeting!  I was so honored that Bro. Baumann allowed me to play along with him.  He told me he really enjoyed it too and that he'd like to do that again.  I would as well!  I already looked at the calendar for next Christmas hoping Christmas Eve fell on a Sunday, but it doesn't - it's on Monday instead.  Drat.  Oh well, we can still do it on 12/23 and it will still be fun and lovely.  Quite a few people told me how much they loved both my song and the closing hymn.  That really meant a lot to me - I often need that self-assurance that comes from those types of comments.

After church was over, Melon Man and I went to Linda and Dave's for brunch.  She made a really yummy Christmas morning sausage/egg casserole.  I think it's almost like Jen's.  It was really good, along with some fresh strawberries and blueberries.  We visited for a small bit and then left to come home.  We sat around for a bit, I tried setting up my new iPad and found out that it's an AT&T 3G service one instead of Verizon and will need to be taken back, and then we headed to Auntie's to teach her how to burn a CD.  Then, it was off to Lisa's for Christmas Day dinner.

She baked her prime rib in her new Nesco roaster and it was super tender.  Linda's deviled eggs were divine as were the twice baked potatoes.  A bunch of us were not feeling well, so we ended the night early.  As we got in the truck to come home, Melon Man noticed the odometer on the truck... 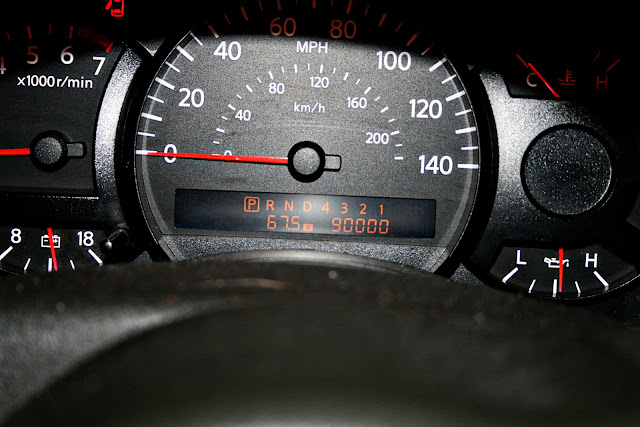 You played beautifully! And, I didn't even catch the couple of mistakes you say you made.