Anyone who knows me knows that I have a special Christmas Eve tradition that I do all on my own.  Yes...I open a bottle of Martinelli's Sparkling Cider somewhere around 10 a.m. and start drinking.  Not drinking to be "drinking" but drinking to celebrate this special day.  I work through the entire bottle as the day goes on and then by evening, I'm so bloated from the gases in it, that I'm full of gas myself.  Today was a little different.  Because I have to play the piano tomorrow in church, I had to be up and out the door to the store by 7:30 to do our meat shopping, then drop it off at the house after picking up some breakfast for Melon Man too, and then I headed to the church to practice on the piano in the chapel.  I was so parched by the time I left there that I stopped off at QT on the way to pick up the bread at the deli and got me a huge Diet Pepsi instead!  So...sorry Martinelli...our tradition waned this year. 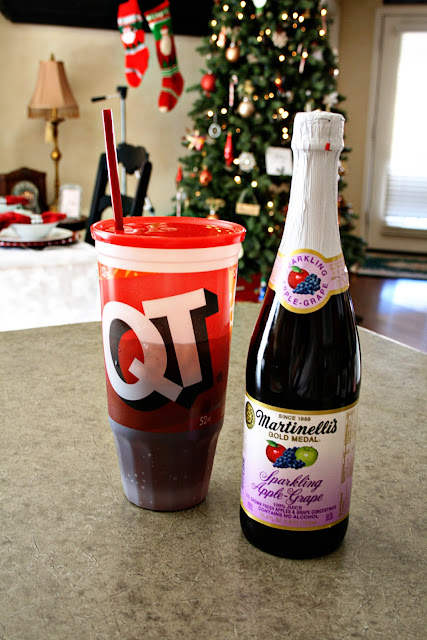 Another tradition I have is that I eat shrimp cocktail throughout the day as I'm prepping for the evening.  It's a protein snack so it's not high in calories, they are tasty little critters, and they are just right for munching. 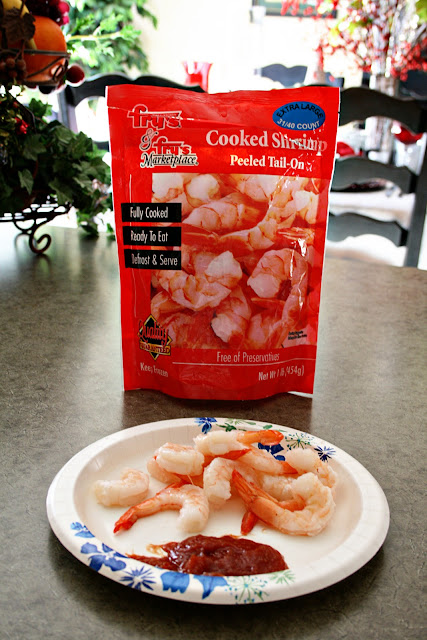 So this year, I thought I'd take some pictures of the prep work for the food for Christmas Eve.  But, once I got done with the platters, I never did take any pictures of the prep work for the Clam Chowder!  Oh well.  So, here, we have the breads - fresh rye from the deli - it was still warm when I picked it up - and sourdough from the grocery store - it was the last loaf - at 7:30 a.m.!  Also in this shot is the big 69 oz can of clams.  I get these at Fart and Smile Smart and Final and you get a lot of clams for a lot less than buying individual clams.  I think it is $9 or $10 for this can, versus $2 per can for the small cans.  And, they are chopped versus minced, so the pieces are bigger, which I really like.  (This picture amazingly makes the can look like a can of soup, but it's not) 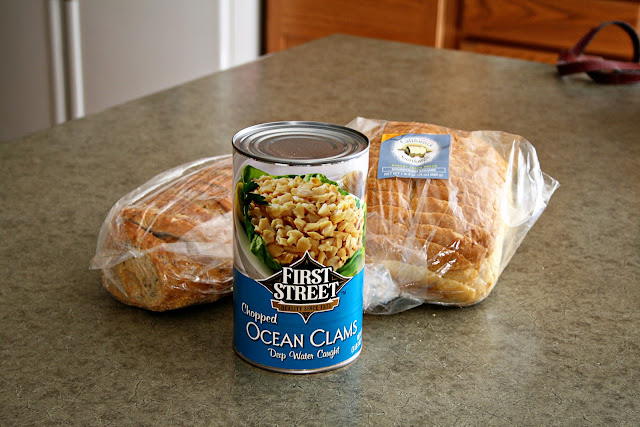 Soon, it's time to get the meat and cheeses out to make the platters.  I usually buy all of the cheese at the Fry's deli counter, along with all of the meat except the pepperoni and salami which I buy at Smart & Final.  But this year, I decided to buy everything but the pastrami, roast beef, turkey, and ham at S&F.  That was a mistake.  The muenster was dry and sharp.   The monterey jack was really good though as well as the provolone.  The cheddar was just okay.  The havarti was stuck together, even with the papers inbetween.  Good thing I'd bought just a single pound of good havarti at Fry's for some odd reason.  It came in handy when I just about threw the pre-packed stuff across the room in anger. 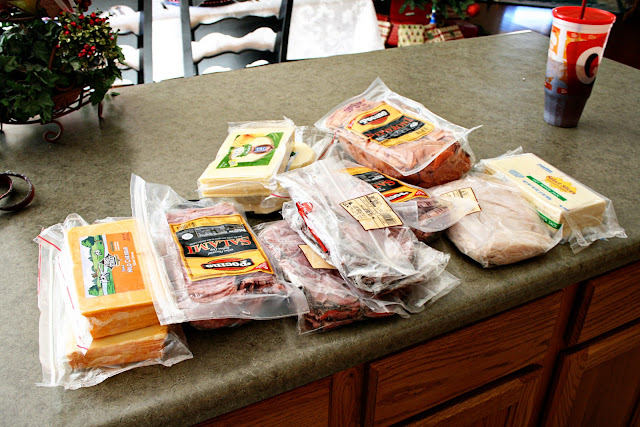 This was our little cheese platter.  Usually I put out a lot more but then I have to put a lot back, so I thought I'd try this amount for the nine eight of us.  It ended up being just right.  Note to self:  next year, just get the cheese at the deli and and get about 8-10 slices of each.  Perfect. 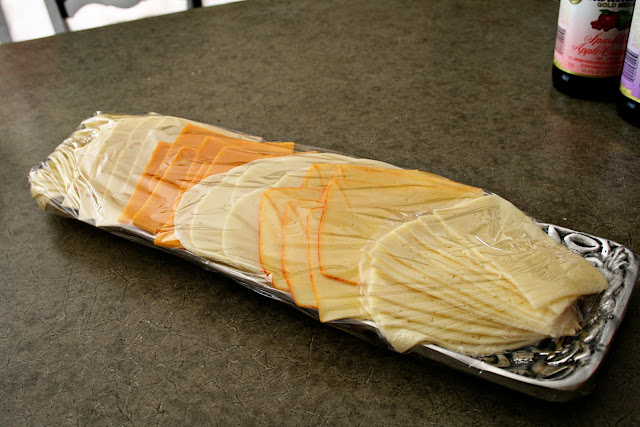 This was our meat platter.  Pocino brand pepperoni in the center, turkey on the left, then going clockwise, roast beef, Pocino salami, ham, more Pocino salami, and then pastrami.  It was all delicious.  Nothing like my grandfather's salami!  Look at that Martinelli's sneaking into the picture like that...you'd think they were sad because they were left out of the Christmas Eve tradition this year! 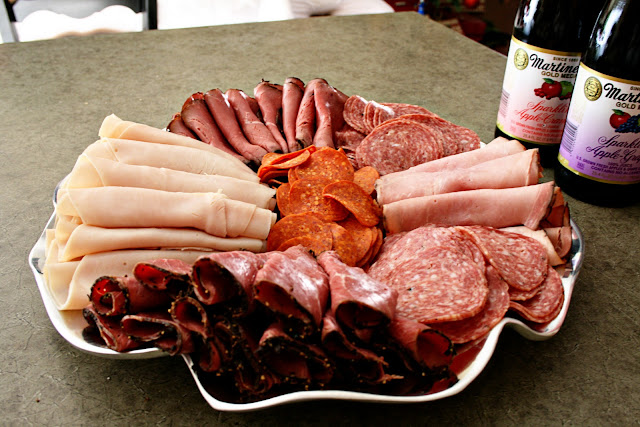 So, after all the food platters were made, I made the chowder, showered, and got ready for our guests.  Then, I went around and took pictures of everything.  This wonderfully blurry picture is of the piano just as you walk in the front door.  I still love my little nativity set that someone secretly gave me a couple years ago.  It's so simple and perfect.  The jar is a gift that a friend from the ward dropped by and has a brownie mix in it.  Drat, I wish this picture hadn't turned out blurry.  Oh well. 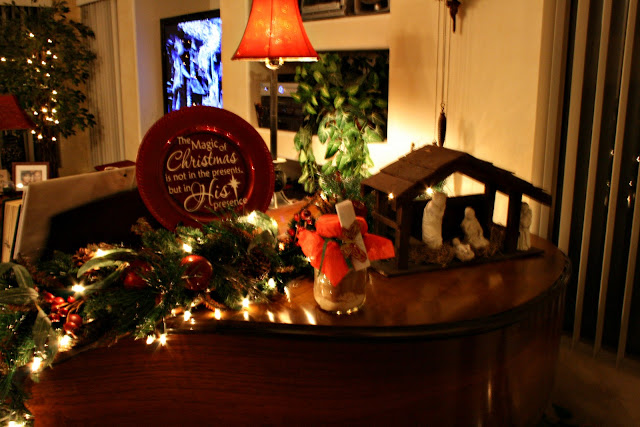 Of course, my little Christmas bird house and snowman.  It stays out all year, but only gets the lights turned on at Christmas time.  I often think about storing it away during the year, but then never know what to put in this space, so I just leave it there. 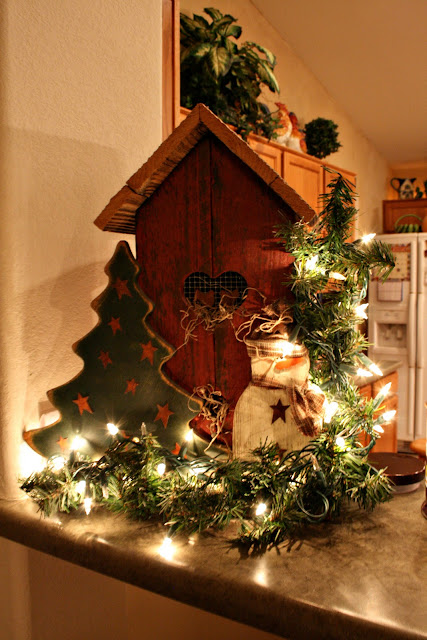 This is our new Salt Lake City village set.  It's got the Church Administration building, the Lion House and Eagle Gate, the Salt Lake temple, the Tabernacle, and the Assembly Hall.  I got it for a smokin' deal this year and couldn't pass it up.  I also bought the trees at Michaels for 65% off and added strands of mini-mini Christmas lights to them so they would look like the trees on temple square.  I really wanted to put our entire village out this year but 1) I never had time and 2) we had the piano tuned so I couldn't have done it anyway until after that was done.  It's so much work that I decided it just wouldn't be out long enough to warrant the effort.  So, we just got the downtown SLC village this year - and you know...I kinda really liked it that way. 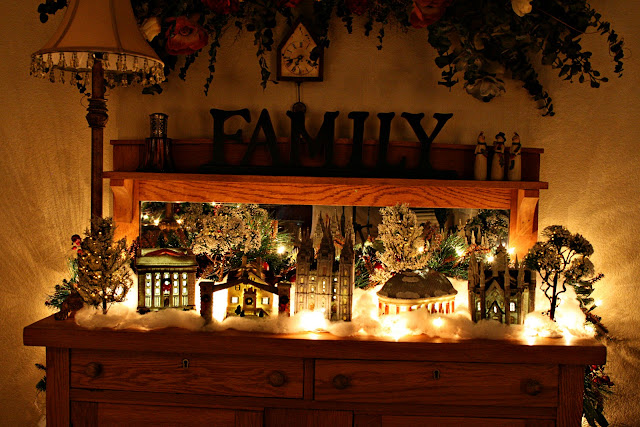 And this is our lovely freakishly lit Christmas tree this year.  Only half of the lights worked when Melon Man first put it up.  Why?  All of them worked when I put it in the box last year.  Drat again.  Oh well.  After working to fix as many as I could, I finally said "screw it" and wove 2 strands of 100 lights on the tree in the dark areas.  Looks like I ran a little short a little toward the top, I guess.  Oh well, looks way better than it did. 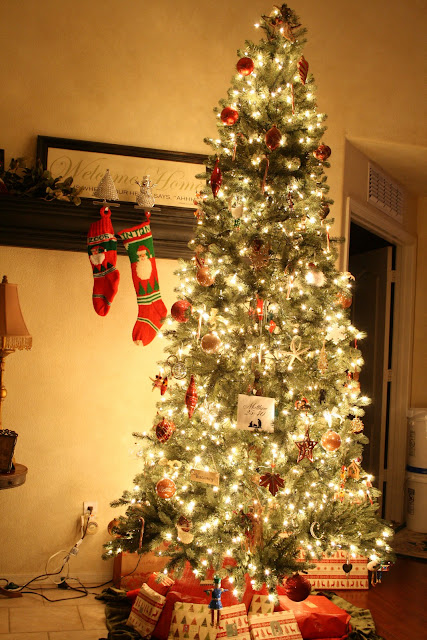 And finally...the table.  This year's "theme" was red, white, and silver.  I loved all the candles on the mirror again, along with the light-up branches in the centerpiece I put together.  But, I wasn't as thrilled with the overall result as I was last year with the blue, silver, and white.  Oh well, this one felt like Christmas because of the red, whereas last year felt cold and wintery. 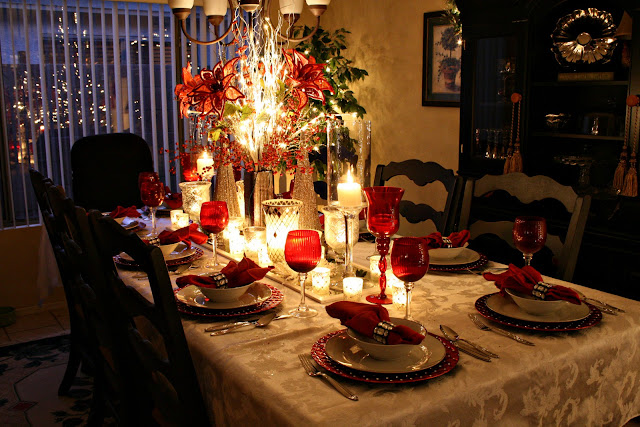 Everyone was supposed to arrive between 5:30 and 6:00 but folks got there between 6:15 and 6:30.  I was fine with that.  Gave me a few minutes to get last minute things together like mayonnaise, butter, mustard, bread, water, etc.  We ate, visited, Linda kindly did the dishes for me, and then we moved to the living room for our program.  Jim hadn't made it for dinner, but he arrived during the program.  After the program was over, Melon Man gave every one of the guys their own "Christmas Story" shirt and he wore his Grinch shirt.  They were perfect for all of the guys. 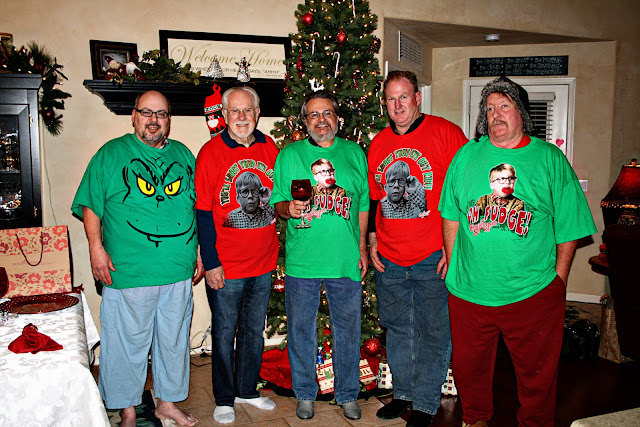 By about 11 p.m., everyone had left and Melon Man and I exchanged gifts as is our tradition.  We like to do it by the glow of the lights and since we don't have kids that would inevitably get up while it was still dark on Christmas morning, we tend to sleep in and so it's light outside when we get up.  So, we opened our gifts before heading to bed.  I got Melon Man a kit full of tools and paints, along with a 1:700 scale model of the Edmund Fitzgerald and he got me an iPad2.  I was so very excited!!  We gave the dogs their gifts too and Dog took his rawhide bone and was running all over with it.  Doodles, on the other hand, was mad because he didn't get a bone and he sulked and wouldn't play with any of his toys.  Sounds like a bunch of kids on Christmas morning, doesn't it!

I love how everyone looks so comfortable in their jeans, sweats, and pj's (?). I love the shirts, so funny!

And, you did a great job!